Pulwama and the Prime-Time Prime Minister

Prime Minister Narendra Modi and hyper-nationalism are as inseparable as Siamese twins. Even the latter occasionally drift away. But Modi is seemingly so obsessive about escalating his muscular patriotism pitch that he can, to my mind, barely conceal his delight in pouncing upon the hostile exchanges with traditional adversary Pakistan since the Pulwama terror attack that killed 40 CRPF soldiers on February 14, 2019. 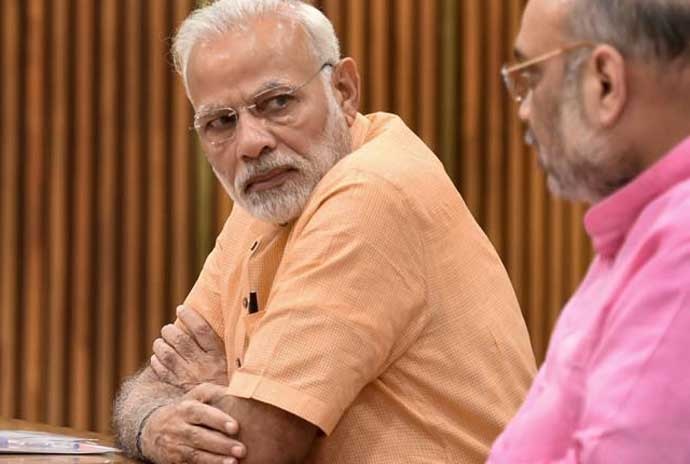 That the Jaish-e-Mohammed (JeM), Maulana Masood Azhar’s terrorist organisation, which has received benediction from Pakistan’s deep state, claimed responsibility for the dastardly attack instantaneously reflects the malevolent rush they got from the act. That India was caught napping was equally unmistakable; how a reportedly massive haul of 600 pounds of RDX could get away undetected is disturbing.

But the consummate politician in Modi, instead of prioritising national security risks, in a turbo-charged, war-hysteric environment, went on a frenetic electioneering campaign, spewing his predictable rhetoric. He castigated the Opposition, unambiguously branding them as 'anti-national' (even the PMO Twitter handle was apparently deployed to assiduously make the opponents look like 'the enemy’).

It was in astonishingly bad taste and, to many, smacked of rank opportunism. That Modi spoke with the backdrop of the slain martyrs' photos was, to my mind, a nadir in crude politicking.

Alongside, India’s political discourse turned insufferably sulphurous — it stinks of putrid hate. Following the cold-blooded massacre of over 40 CRPF soldiers in Pulwama, the air-strikes at Balakot in Khyber Pakhtunkhwa and the arrest of Wing Commander Abhinandan Varthaman in Pakistan and his subsequent release, Modi seems to have convinced himself that mere aggressive posturing and militaristic bravado will sail him through the upcoming General Elections. Fact is, after Pulwama, there have been 20 security personnel deaths, and a bomb was thrown in a bus at Jammu, killing a teenager and injuring 30 people. But Modi is undeterred; his admirers in sections of the mainstream media, genuflecting in synchronicity, carrying his propaganda forward. The Modi government must answer how Pulwama could happen in the first place. (Source: Reuters)

They are supported by a whole range of retired army veterans — each outdoing the other in a war cry of bloody retribution. It is like a surgical strike targeting the impressionable youth, cementing the hot-headed core vote bank, ensnaring the borderline confused voter, unable to decipher the wheat from the chaff amidst the cacophonous madness on prime-time TV. The Bharatiya Janata Party has thrown compunction to the winds and is displaying an incalculable ruthlessness — win the elections of 2019 at any cost. Everything else can wait.

BJP President Amit Shah apparently concocted 250 as the number of terrorists killed in the JeM camp at Balakot. Shah is known for his classic faux pas (he seemingly forgot that BS Yeddyurappa was part of the BJP during the Karnataka campaign last year), but here, as I see it, it was evident that he was gloating, and thus came up with a convenient rounded figure. But he had competition — BSY then did some micro-targeting and prognosticated that the BJP would get 22 seats out of 28 in Karnataka. Elsewhere, Yogi Adityanath, clearly dissatisfied with Shah’s conjecture, reportedly enhanced the terrorist head count to 400. Himanta Biswa Sarma, BJP’s hatchet man in the North-East, came up with a Tom Cruise-inspired conspiracy theory, reportedly surmising that if the people did not vote BJP, then Pakistan would attack India. How exactly did BJP president Amit Shah get 250 as the number of terrorists killed in the JeM camp at Balakot? (Source: PTI)

Clearly, Sarma thinks that Pakistan F-16 jets can travel alongside Jet Airways, traversing Indian airspace from west to east, undetected. I happen to think it’s quite anti-national to belittle India’s air force capabilities with such casual disdain — what say, Mr Modi? In short, the BJP brazenly played to the gallery, their political hubris making them believe that post-Pulwama, they can heighten emotional fervour and appear as the sole protector of India’s territorial boundaries. Joblessness, rural distress, the Rafale controversy, reported destruction of independent institutions, attacks on Dalits and minorities, a failed economy et al do not seem to bother Modi. It is a chimera — but they are entitled to their illusions.

Interestingly, Air Chief Marshal BS Dhanoa contradicted the government, puncturing the Alice in Wonderland-like second-guessing, saying they were not going to put a number on human casualties. But the BJP could not care less. They went a step ahead and tried to appropriate the intrepid Wing Commander Abhinandan Varthaman by reportedly posing with his poster and putting the party’s lotus symbol alongside — political immorality at its pits.

It was such boneheaded confabulations that India indulged in for three weeks, with some mainstream anchors fuelling an inflammatory quest for revenge. Lt Gen DS Hooda, who masterminded the 2016 surgical strikes post-Uri, expressed dismay at the manner in which political capital was made out of cross-border military endeavours. But the BJP apparently didn't care. At the end, even some soldiers’ families demanded tangible proof, given the bombastic chest-thumping of the saffron squad. BJP’s alliance partner Shiv Sena in Maharashtra questioned the veracity of the casualty numbers as well. Around the same time, the paramilitary forces were protesting in Delhi that their demands for one-rank, one pension (OROP) were not met by a government under whose watch India’s defence expenditure, reportedly as a proportion of GDP at 1.58 per cent, had reached a historic low after the India-China war.

That some defence experts believed our military equipment qualified in the 'vintage' category did not bother Modi. As far as he is concerned, he seems to have found his electoral leitmotif. 'Ghar me ghus ke maroonga', he thundered, savouring the applause from the crowd perhaps hustled together to add to the atmospherics. As is his wont, he also traduced his opponents, questioning their nationalistic predilections — it was absurd. But there it was.

India heads for General Elections in a few weeks. Switching off the TV sets might be the first step to ensuring that great Indian democracy will survive.