Tavleen Singh’s Messiah Modi is a book for Modi

In her new book Messiah Modi, the biggest charge Singh makes against Modi is that he has developed the ‘messiah syndrome’.

It’s one thing when your critics criticise you. But it’s quite another when your once-upon-a-time supporters begin to tear down you, your policies and your performance. Tavleen Singh, who drew a lot of flak when she started to support Narendra Modi as Prime Minister through her columns, pulls no punches in expressing her denunciation for Modi six years after he came to occupy India’s highest chair, in her latest book Messiah Modi.

The book is no match to Singh’s former works, neither in commentary nor on substance, but it is an important take on where all Modi has floundered and there seem to be too many fronts on which he has failed to match the expectations that Modi drummed up for himself.

According to Singh, the worst aspect about Modi’s prime-ministership, which is supported by the most decisive mandate since Rajiv Gandhi’s 1984 win, is his total inability to take criticism. Tavleen Singh says Modi is allergic to it. So, what explains his back-to-back victories, with the second one being more comprehensive than the first, is Rahul Gandhi. Singh believes the Congress leader is Modi’s best gift because it is by projecting Gandhi as the face of the Opposition that the BJP has succeeded in building its There Is No Alternative (TINA) — to Modi — narrative.

The book begins tracing Modi’s prime ministerial campaign a little before 2014 and chronologically narrates why the author seems to have lost hope in the leader who she had once vouched for, even at the cost of losing friends. And it’s the economy where Singh says Modi disappointed her the most.

“The economy spent most of Modi’s first term reeling from the shock of his two most disruptive examples of parivartan. On the political front the best change, in public perception, was that he managed to run a government that remained untainted by the sort of scandals that had been the hallmark of most Congress prime ministers for decades,” she writes.

The author says Modi is not open to advice and stays aloof to the point that he has no friends. He even eats alone.

But the biggest accusation that Singh makes against Modi is that he has developed the ‘messiah syndrome’, which loosely means a state of mind in which an individual holds a belief that they are destined to become a saviour one day.

She says it’s the same syndrome that the Gandhi family suffers from, believing they have the divine right to govern the country. What is Singh’s proof that Modi suffers from the ‘messiah syndrome’? His looks. 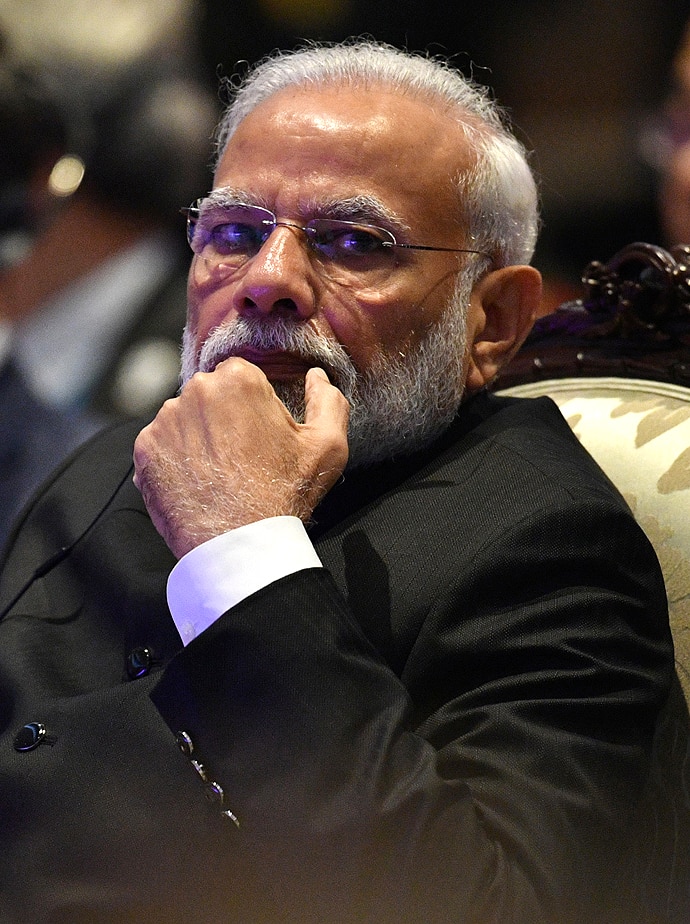 The author says Modi is not open to advice and stays aloof to the point that he has no friends and even eats alone. (Photo: Reuters)

This is a book Modi must read because at the height of power, it helps to listen to people who are not speaking to you in reverence. No matter how bitter, they may offer just the advice you need to listen to.

But should the ordinary reader pick up the book?

They say all kinds of reading helps. If nothing, you end up picking up a few new words. For those who have been following India’s politics closely over the past decade or so, the book has nothing new to offer.

Tavleen is a ground reporter. She has been reporting from India’s deepest nooks and narrowest alleys since the mid-1970s. With books like Durbar, she managed to paint the picture of an India going through Emergency and the politics that followed, in great detail. For those who were not born back then and for those who were too young to comprehend, those accounts helped. But what Tavleen Singh has to say in Messiah Modi has been seen, felt and read — also in Tavleen’s own newspaper columns.

At certain points in the book, she appears to be venting, at others she seems to be demanding that her suggestions be made government policy. In one instance, Singh delineates the story of a meeting she held with Smriti Irani when the latter was the minister for Human Resource Development. Singh suggests that the University Grants Commission be dissolved. Irani pays little attention and then shifts to ‘gossiping’ about Madhu Kishwar. Irani reportedly paid “not the slightest attention” to Singh’ suggestion.

Beyond this episode, the book is dry on juicy “insider secrets” journalists can be privy to. Singh’s earlier works are rich on them. That could be because under Modi, the government hasn’t been media-friendly though some journalists, who had so far been the outliers of the ‘Khan Market gang’, do have ‘access’.

But for Modi, who has deprived himself of friends, this book is a must read. It can give him a window into what a section of the janta, whom he promised development, thinks of the parivartan he has brought. The book can perhaps give him company through that lonely dinner.

#Khan market gang, #Tavleen singh, #Messiah modi, #Narendra Modi
The views and opinions expressed in this article are those of the authors and do not necessarily reflect the official policy or position of DailyO.in or the India Today Group. The writers are solely responsible for any claims arising out of the contents of this article.