India's Angry Election: Modi may win, his critics may lose on May 23. But what's certain is more bitterness and lots more rage

The 2014 election was extremely hard for a handful of vested interests to bear. The results of 2019 will now be fought over to shreds. Expect disturbances, including in law and order.

Another nine days from today and it will all be over — or, will it?

In May 2014, the nation was taken by surprise. No one had expected that scale of the BJP’s victory. The opposition was stunned. Rahul Gandhi could not even bring himself to name the BJP. In his short appearance before TV cameras with Sonia Gandhi on his side, all he could mumble was “They have been given a mandate by the people of our country”.

The country was in a state of euphoria. Before people could recover from the shock and awe, Narendra Modi was taking oath at Rashtrapati Bhavan before an audience comprising, among others, heads of government from the neighbouring SAARC countries.

After months of hectic electioneering and intense strategising, all players have been working on multiple scenarios.

Within the BJP, Amit Shah and Modi must have done their math. They may have a better sense than the others about a possible outcome. But such is the beauty of elections that “It ain’t over till the last vote is counted”, as the Americans would say.

However, there is another constituency on high alert. They are the activists and intellectuals, including certain sections of the media, who are highly invested in these elections. This group had a virtual meltdown in 2014. Some were in TV studios when the results were coming in — and they were shattered.

They are now waiting for revenge.

Finally, there is the union of superannuated wise men who took it upon themselves to bring down Narendra Modi. They are hoping that May 23 can get them back into business.

Clearly, the stakes are high. When politicians of different hues fan the fear of Constitution and elections being scrapped if Narendra Modi comes back to power, they are being disingenuous. But what many of them are actually worried about is that a second term for Modi might well mean the end of their political careers. 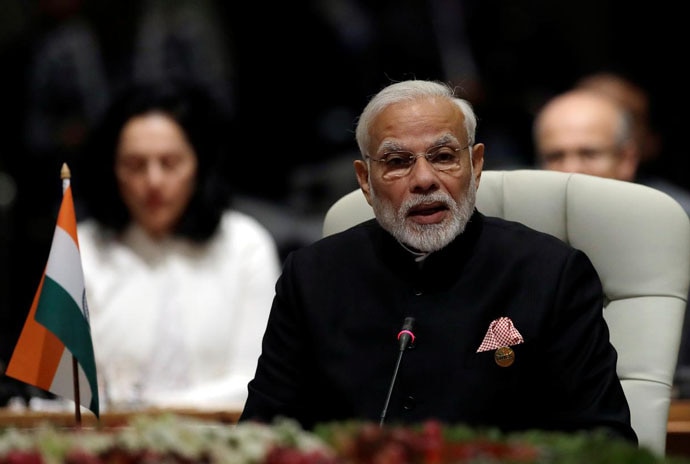 Is he preparing for a second term? Heralded perhaps by a many-fronted storm? (Source: Reuters)

Waiting in the wings, of course, are the sponsors. Ready with war-chests to tilt the scales in favour of their current favourites.

The short point, therefore, is that no side will throw in the towel easily. They will all try to stay in the game and make a last-ditch effort to turn even an adverse result to their advantage. After all, politics, as they say, is the art of the possible.

This is not an exercise in political crystal ball reading. I, like most election watchers, have my own predictions on the numbers. But I would not be fair to cloud the analysis with my own predilection.

The simplest situation would be if the BJP gets routed and is in no position to form a government. No matter how improbable it may sound to a vast section of the population, prudence dictates that one should not discount the power of wishful thinking.

Pollsters have already factored in the BJP’s losses in Uttar Pradesh — however, that will not benefit the Congress much.

To get into the driver’s seat, the Congress will have to get a major swing in Madhya Pradesh and Rajasthan and make a serious dent in Gujarat. Further, it has to do well in Chhattisgarh, Haryana, Punjab, Himachal and Uttarakhand and secure Karnataka with the help of the Janata Dal (Secular). That would mean a veritable Rahul wave that the radars may have missed due to the over-hanging cloud cover.

Still, Congress will have to negotiate through the choppy waters of post-poll coalition formation. MK Stalin has already committed support to the Congress. Chandrababu Naidu will be only too happy to join the party — but he may not have the numbers to matter.

If the tally of the non-Congress opposition parties is sizeable, it may give Amit Shah room to pull strings through his friend K Chandrashekar Rao and undermine the Congress’ designs.

Another construct can be that both Congress and BJP do not do well — in such a case, the non-Congress opposition will have sufficient numerical strength to form a government. Without speculating about the leadership tussle that is bound to happen, will Congress be able to eschew the temptation of joining the coalition if Rahul Gandhi is not offered the prime ministerial position?

If Congress stays out, offering ‘outside support’, the formation would still be vulnerable to external manipulation. But again, they say power can be a major glue and combined with visceral hate for one party, it can be stickier than Fevicol.

Either way, one can expect a lot of drama with much commute between Raisina Hill and the Supreme Court.

All types of players will jump into the fray — power-brokers, moneybags and backroom operators will have a field day. This would take more than a few days to sort out and come to a workable understanding. Ready for it: The Supreme Court could see many parties and candidates run towards it with heated complaints after May 23. (Source: PTI)

However, the real fun and games will happen if the BJP is anywhere close to forming a government. Even if it has an absolute majority on its own or with the National Democratic Alliance (NDA) partners, Modi cannot expect a bump free ride to Rashtrapati Bhavan. The forces that are aligned against him will leave no stone to create speed-breakers on the way.

For the allied opposition, 2014 was an accident. A “Black Swan” election as some pundits called it in hindsight. A 2014 redux would spell disaster for many and they will not let it pass without contest.

A legal challenge of the elections can be predicted almost with certainty. The Chief Justice of India, Ranjan Gogoi, has taken the exceptional step of sitting on the vacation bench. Legal reporters are already suggesting that he may have done so anticipating “disputes in government formation”.

Murmurs of EVM malfunctioning have started resurfacing. Complaints of tampering with electoral data and other allegations of unfair practices are flying in the air. EC clean chits on complaints are being questioned. The Prime Minister has been accused of several MCC (Model Code of Conduct) violations. All these are ominous signs of post-election courtroom drama.

Modi is often compared to Indira Gandhi, albeit for the wrong reasons. It is not outside the realm of imagination though that someone tries to trip Narendra Modi by doing a “Raj Narain” on him a la Indira Gandhi. The prospect sounds even more real as some of Modi’s biggest detractors have first-hand experience of that case.

Another chief minister expressing displeasure at the deployment of central forces in the state and the Election Commission’s role in conducting free and fair polls said during a speech “We are getting our papers ready for going to court” at an appropriate time. Not spared critique: Some leaders appear very miffed with the Election Commission for conducting free and fair elections. (Source: PTI)

More worrying is the widespread violence witnessed during these elections. In the course of electioneering, some leaders have gone to the extent of threatening ‘badla’ after the elections. A matter of abundant caution, the government has to be prepared for containing law and order disturbances — violence after the results are declared will be a blot on our democracy.

The 2019 Parliamentary elections have been, arguably, the bitterest in independent India’s history.

It may be argued that the roots of this hostility lie in those who lost in 2014 not being able to accept the legitimacy of those who democratically came to power. However, a republic like India cannot be run either as a judicial democracy or turned into a mobocracy.

It is for right thinking citizens from all walks of life — politics, media, judiciary, civil society — to demand restoration of democratic decorum in accepting the verdict gracefully.

The nation needs a period of healing, for which all sides have to take responsibility and ownership.

#Supreme Court, #Narendra Modi, #Lok Sabha elections 2019, #Lok sabha election results
The views and opinions expressed in this article are those of the authors and do not necessarily reflect the official policy or position of DailyO.in or the India Today Group. The writers are solely responsible for any claims arising out of the contents of this article.