No More Jeers: PM Modi’s ‘Khan Market gang' comment is a sharp retort to the elitism of Sam Pitroda and Mani Shankar Aiyar

Modi's phrase signifies the resentment in a sizeable section of voiceless India which has begun to find its voice. And which has started to reject mockery by the elite such as the Congress' venerable elders.

Does the Congress need the elitism of Mani Shankar Aiyar and Sam Pitroda at the fag end of a very volatile — and vile — election campaign?

Will Aiyar reiterating his controversial stance, calling Prime Minister Narendra Modi ‘neech aadmi’, help the Congress appear a more empathetic party with a moral high ground since it has based its campaign on love and ‘Nyay’? Every now and then, when Rahul Gandhi manages to take a break from his “Chowkidar chor hai” sloganeering, he seems to remind himself to bring the focus back to love and empathy. The Congress President has been talking about speaking the language of love, but the party's leaders have not been far behind the BJP in spewing hate and flaunting callous arrogance.

Look at the two recent cases of Aiyar and Pitroda, one commenting on PM Modi apparently being a lowly person and the other brushing aside a question on the 1984 Sikh riots with sheer disdain. These may not be issues which make or break an election but Congress leaders like Aiyar and Pitroda seem to be handing out evocative campaign issues to the BJP for sure.

It has also left Rahul Gandhi red-faced, with no option but to apologise and distance the party from the comments made. After his ‘neech aadmi jibe’ for Modi in 2017, Aiyar solicited a suspension — but he is back in the Congress and back at his ways. 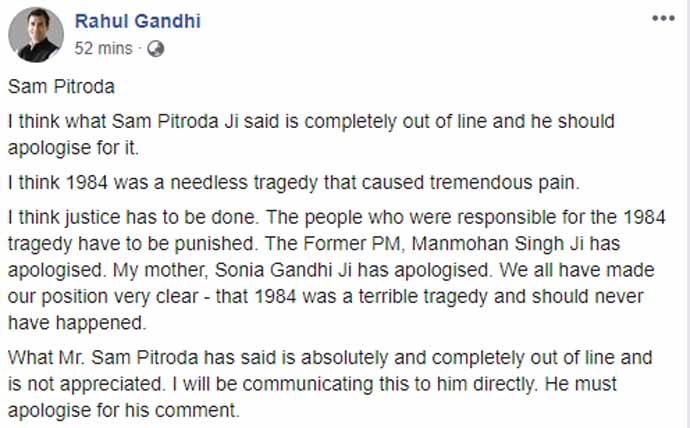 He clearly didn't learn any lessons — or didn’t want to. So, he wrote an article for Rising Kashmir which was reproduced by ThePrint in which he justified his ‘neech’ remark. While making fun of PM Modi’s cloud radar theory on the Balakot air-strikes, he compared Modi's “stunningly illiterate claims" with former Prime Minister Jawaharlal Nehru’s education to bring PM Modi down.

While Modi’s cloud radar theory is laughable, the comparison of his modest educational background to a Harrow and Trinity-educated Pandit Nehru reeks of a condescending attitude. By calling the PM “vacuous” and senior officers pusillanimous in his piece, Aiyar probably wanted to drive home his own superiority and the flaws of PM Modi — but instead, ended up only as a liability for the Congress.

It clearly is not something which would give the party any electoral gain.

In 2017, when Aiyar’s 'neech aadmi' comment sparked a massive controversy, it was used in the Gujarat Assembly elections by the BJP to show how the Congress resorted to personal attacks.

Earlier in 2014, when Aiyar flaunted his own educational pedigree and loudly purported sense of any class by commenting on Modi as a “chaiwala”, it was the beginning of a massive “Chai Pe Charcha” campaign. The BJP responded by launching the campaign — and Modi referred to himself as the chaiwalla. From then on in fact, Modi referred to himself as a chaiwala in all his rallies.

Boasting about the accuracy of his prediction, Aiyar showed no repentance later on either — rather, his rude and supercilious behaviour towards journalists on being questioned about his stand was further shocking.

Interestingly, Aiyar is not the only one who has created a nuisance for the party. Sam Pitroda, the overseas chief of Congress, trumped Aiyar with his comments on the 1984 anti-Sikh riots by showing how insensitive he really is.

A long-time friend of the Gandhi family, Pitroda displayed a similar “I don’t care” attitude on being questioned on the 1984 Sikh massacre. His “Hua to hua” comment was immediately lapped up by the BJP and the PM has never let go of an opportunity since to tell the electorate that “Hua to hua” sums up the Congress’ philosophy, one that is steeped in superciliousness.

Politics is a great deal about striking a chord with the people. It’s a lot about turning a disadvantage to your advantage — an art that PM Modi seems to have mastered. He has used each bit of slander to his advantage. So, as expected, PM Modi jumped on this opportunity too and said Pitroda's comments were an embodiment of the Congress’ arrogance and shouldn't be seen as a standalone case. Bring it on: Narendra Modi has managed to use all personal criticism directed at him to his advantage. (Source: Reuters)

Facing flak, Pitroda said the BJP had twisted his words and blamed his poor Hindi for the comment — but Aiyar seems belligerent even after the damage caused and even threatened to hit journalists. The Congress, of course, had to distance itself from his comments and behaviour with Randeep Surjewala saying that it is Mani Shankar’s personal opinion and the Congress party does not endorse uncivil language.

The recent incidents have shown that in spite of the Congress campaign talking about connecting with the ‘aam’ Indian, giving voice to their aspirations through the Nyay scheme, et al, the party’s top leaders remain ensconced in their bubble of elitism.

At this point in elections, when the last phase is just round the corner, these statements are unlikely to make much difference in voting preferences. The question remains though — had Aiyar not used the 'chaiwala' jibe, would 2014 been a different election — or without the “neech aadmi comment in 2017, would the Gujarat Assembly elections would have looked different?

There can be more than one probable answer to this but the perception such discourse builds of political parties and their leaders is undeniable.

In his recent interview to The Indian Express, the PM officially introduced a rather innocuous term — the ‘Khan Market gang’ — in the political discourse. Many people have been using it and would understand what it implies but a so-called ‘mofussil’ PM attacking the elite 'Khan Market gang' goes to show how empowered the so-called gang has been in shaping the idea of India —and also, the rest of the silent majority is now no longer willing to just look up to this superiority with awe. 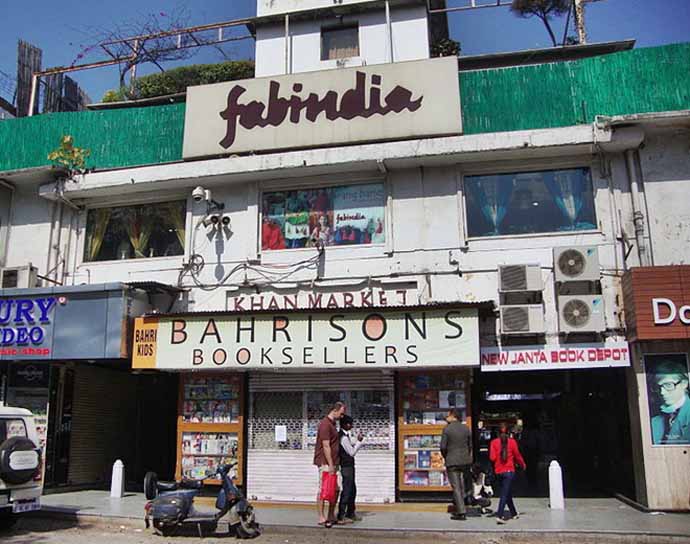 Beyond Shopping: Khan Market has also played a role in the heated discourse of this election. (Source: Wikimedia Commons)

Khan Market, one of Delhi’s poshest shopping areas, has been synonymous with elitism. The use of the apparently harmless phrase by the Prime Minister signifies the resentment in a sizeable section of voiceless India which has now begun to find its voice. The reference is also a reminder to the elite who, till now, held colossal sway over the destiny of billions of Indians that they are getting progressively irrelevant in the changing social order. The grand old party of India, the Congress, too has also been pretty much dominated by an inner coterie of old elites.

Aiyar and Pitroda are an example of this privileged lot.

It's time they pay heed to the change.

Post your comment
#Hua to hua, #Narendra Modi, #Sam Pitroda, #Mani Shankar Aiyar
The views and opinions expressed in this article are those of the authors and do not necessarily reflect the official policy or position of DailyO.in or the India Today Group. The writers are solely responsible for any claims arising out of the contents of this article.