The year 2018 has seen the most polarising politics in India. But if we could just discard the old templates, 2019 can be a year of re-imagining Indian politics.

Talking politics, 2018 was a half-pregnant year. The BJP was down, but not out. The Congress’ new President was “coming of age” even at 48. Opposition unity was still a rumour, ridden with holes of inner contradictions. The picture was as fuzzy as Delhi smog.

Around this same time in circa 2013, the political atmosphere was so saturated that one could cut it with a pen-knife.

That air of anticipation is missing now. Political fatigue has set in.

But the law of diminishing TRPs applies to opinion polls as well. 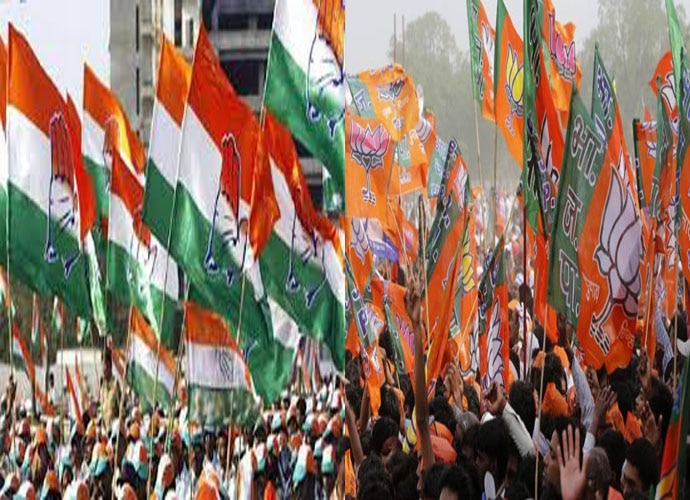 The year has been one of upheaval for both national parties. (Photos: PTI)

People are running out of patience. The last five years have been one of the most intense periods in India’s recent political history. Ideological polarisation is at an all-time high. So, this present state of suspended animation is becoming unbearable. Everyone wants the Lok Sabha Elections of 2019 to be over with soon.

If 2018 was frustrating, 2019 does not look very encouraging either.

This year began with an overhang of the Gujarat elections, which had gone down to the wire. Bringing the BJP almost to its knees in Narendra Modi and Amit Shah’s home state was Rahul Gandhi’s baptism by fire. A nice inaugural gift before his anointment as Congress president.

From there on, Gandhi has been on mission mode.

His sole aim is to reposition Narendra Modi’s TINA ('There Is No Alternative') factor with AOBM — 'Any One but Modi'. To be fair, he has succeeded in doing that to an extent.

So, as we stand at the cusp of the New Year, the question is not ‘who will become the next Prime Minister’, but ‘will Narendra Modi will get another term’?

It is tempting to limit the crystal ball-gazing for 2019 to two scenarios — India with or without Modi as PM.

But that would be far too naïve and simplistic. Both these propositions come with their own set of complexities and variables. 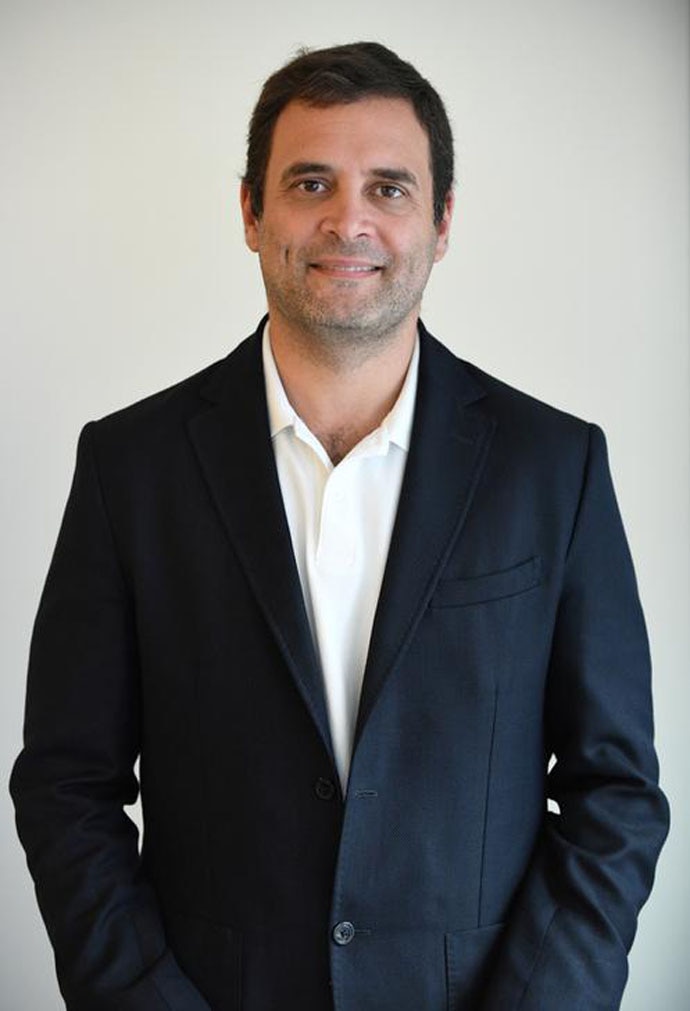 Rahul Gandhi has looked surer of himself this year. (Photo: Reuters/file)

What is certain at this point is that the elections next year are unlikely to throw up any straight answers. As they say in business, we live in a VUCA ('Volatile, Uncertain, Complex and Ambiguous') world —  we have to navigate through uncharted territory and choppy waters for some time.

Therein also lies one lesson of the last five years. Many assumed that the decisive mandate of 2014 signalled a watershed. But it is not easy to make major course corrections in a country as diverse and disparate as India. There are too many forces, cross-currents, counter-pulls and pressures to allow unidirectional movement. To the one in the driver’s seat, it may appear as speed-breakers. Others would call it checks and balances of democracy.

In the coming months, it is the pluralistic character of India that will be under test at various levels. We have far too many constituencies — region, religion, caste, community or political ideology. Attempts to hijack the discourse will invite push-back from others. No constituency will give a free pass to another.

Let us be more specific.

The BJP’s efforts at saffronisation polarised a spectrum of political forces against it. This 'secular' alliance will commit an equal folly if it thinks it can take the right wing for granted. So, one-upmanship in minority appeasement is giving way to 'competitive Hindutva.

This dialectical process will continue.

This phenomenon can evolve in a million ways.

In the new order, there will be no political untouchables. The 'mahagathbandhan' is Darwinian in character. It is an example of how a threat to survival can bring together sworn enemies. But political marriages are notoriously brittle and promiscuous — politicians are prone to changing partners at the slightest provocation or enticement. As ideological differences blur between parties, regrouping, reengineering and re-morphing will be easy. Regional leaders will have a big role to play — and big decisions to make. (Photo: ANI/file)

How this will go down with potential allies is not known. Talks of a third 'non-Congress and non-BJP' front have resurfaced. This could well be to preempt the Congress, which is taking on a presumptive leadership role. One cannot rule out some returning to the BJP on the rebound, with or without conditions attached.

The BJP’s challenges are more endogenic in comparison.

Narendra Modi, in his quest to reinvent the BJP, challenged the fundamental ethos of the party. A Congress-style dictatorial high command was alien to this cadre-based party. The discomfort of the BJP-RSS old guard with Modi-Shah’s iron grip is palpable.

The BJP-RSS handed over reins of both government and party to Modi as a fait accompli in 2014 —  but that licence was subject to Modi’s continued ability to deliver the goods. Unlike the Congress, the BJP and the RSS are too strong at the roots for any individual to have a permanent hold on it. In case of a dilution in Modi’s success quotient, the Nagpur elders may call for a renegotiation of the contract. Is the RSS trying to rein in Modi-Shah? (Photo: PTI/file)

Modi’s resilience will again come under trial. He will have to manage internal tensions as much as relationships with allies. How the equations work within the BJP-RSS if it falls short of numbers will be interesting to watch.

More fascinating would be the reaction of the Opposition. Will some of them join forces with the BJP to form a government? Or will they rally around the Congress to keep the BJP out?

India cannot afford further political experiments at this juncture. Whosoever comes to power will not have the luxury of putting off reforms. They will need to address internal crises like agrarian distress and jobs on a war footing.

They will have to confront new realities in the neighbourhood. Pakistan, Sri Lanka, Bangladesh and Afghanistan are all crying out for attention. Kashmir cannot keep simmering. India will also have to determine its role in the global theatre, with three dominant actors — China, Russia and the United States — vying for pre-eminence.

It will be unfortunate if the country gets trapped in another political stalemate. That is possible if Narendra Modi returns with a truncated majority. The Congress will then try once again to derail him. It will oppose everything the government proposes to create an impasse, like it did in his last term.

A converse construct is also worrying. A Congress-led government will go all out to demolish Modi’s legacy. In the bargain, they will undo much of the good work done in the last five years. Unfortunately, that is the Congress’ DNA, evident within a few days in Rajasthan, Madhya Pradesh and Chhattisgarh.

This is something the allies need to be wary of. They must protect their states from the crossfire between two large parties.

Neither a UPA-kind of Mahagathbandhan remote-controlled by the Gandhis, nor a hostile BJP will be in their interest.

The need of the hour is bipartisanship. The final picture could be very different from anything that we can visualise today. These elections will see an interesting tryst between a presidential format and greater federalism. India can have a life without both Modi and Gandhi —  if not without the BJP and Congress. (Photo: PTI/file)

No matter which way the results go, regional leaders will come out stronger than ever before.

Instead of thinking only in binaries, a new equation between pan-Indian and regional parties can emerge. India can have a life without both Modi and Gandhi, if not without the BJP and Congress.

If only we can discard the old templates, 2019 can be a year of reimagining Indian politics.

The time for that starts ticking now.

Happy New Year to all. May India get the government it deserves in 2019.

Post your comment
#RSS, #Rahul Gandhi, #Narendra Modi, #2019 general elections
The views and opinions expressed in this article are those of the authors and do not necessarily reflect the official policy or position of DailyO.in or the India Today Group. The writers are solely responsible for any claims arising out of the contents of this article.