The young party is being hounded by the ruling regime with relentless anxiety.

The prime minister is the leader of the nation. The prime minister is not only the custodian of the Indian Constitution, but also the protector of decorum, decency and protocol, striving for a democratic and dignified code of conduct even in conditions with a striking lack of consensus.

Why, then, did the PM so sharply lower the level of discourse by attacking Aam Aadmi Party (AAP) MP Bhagwant Mann in Parliament on February 7, that too by picking on the fellow Parliamentarian with a crude "drinking" metaphor?

And how did the BJP so unabashedly celebrate the angry, unhappy, tactless speech, replete with "bhaiyon aur behno" – as if it were a rally and not the Parliament?

Surely, Mann, like all other MPs and Indian citizens, has a right to his peaceful privacy with food or drink, milk or ghee.

Or, has the "great helmsman" lost both - the plot and the narrative - as the Congress is slyly suggesting? Why is it that Narendra Modi, his party, and the Sangh Parivar hate the AAP so much?

A young party of mostly volunteers, yet to establish a national base, why is it being hounded by the ruling regime with such relentless anxiety?

Of the many complex reasons, there are two predominant ones: One, for several years running, the BJP was ousted from power by Sheila Dixit and the Congress in Delhi.

Following this, the AAP formed the government for two successive terms, first backed by the Congress for a short and troubled phase.

Most crucially - and this hurts the BJP the most - this fledgling party of young volunteers and idealistic anti-corruption crusaders stopped Modi’s chariot of victory rolling across the landscape, in Delhi, the capital of the nation. Kejriwal's AAP stopped Modi’s chariot of victory rolling across the landscape, in the capital of the nation.

With Kejriwal's scorecard of 67 out of 70, the BJP wiped out and shamed, and its traditional vote base usurped by AAP, pinch-hitter Modi had all his stumps uprooted, and former Kejriwal buddy and middle-class celebrity, Kiran Bedi, could not stop the rout.

She herself faced a humiliating defeat at the hands of an unknown, 60-year-old AAP candidate, SK Bagga, in East Delhi's Krishna Nagar, considered one of the "safest" BJP seats - pampered by its senior leader Harsh Vardhan.

Forgotten is the fact that she was floated as the winning trump card by the trio of Modi, Amit Shah and Arun Jaitley.

That all three had egg on their face proved to be bad news for the AAP-majority government, as, almost immediately after taking over, the daily hounding and humiliation of their MLAs, ministers and bureaucrats was ritualistically enacted like a public spectacle by the central government, using the then Lieutenant-Governor, Najeeb Jung, as a willing "protagonist".

The government was just not allowed to function, its eaders packed off to jail with raids and chargesheets, or accused in all kinds of twilight zone cases.

Even the exemplary and courageous work done by young Swati Maliwal, chairperson of the Delhi Commission of Women, was trashed; she became a visible target, but, stoic and gutsy as she is, she has refused to succumb.

Kejriwal went on to abuse and attack Modi directly and routinely, voicing sentiments vicariously shared widely by citizens who understood his frustration.

He went on to post on Twitter on December 15, 2015, that “Modi is a coward and a psychopath”, unprecedented for a chief minister to state so categorically about a prime minister, though legendary Bengal chief minister of the CPM, Jyoti Basu, reportedly, called the BJP a “party of barbarians” once upon a time. 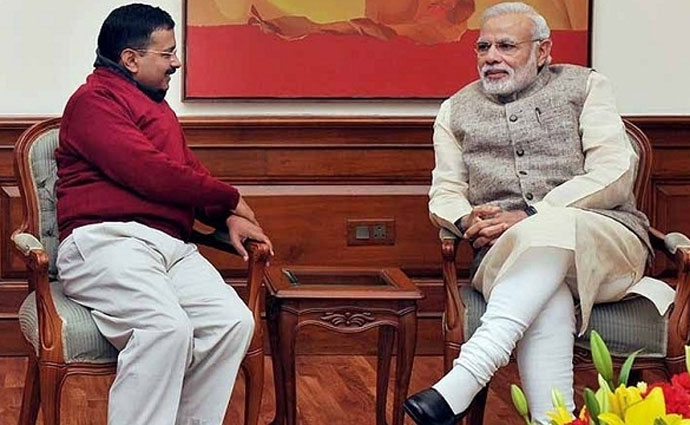 Kejriwal went on to post on Twitter on December 15, 2015, that “Modi is a coward and a psychopath”.

The second reason as to why the BJP hates the AAP with such vehemence is an in-house reverse of the Stockholm Syndrome, a case of "jilted lovers", or, unrequited love gone awry.

Indeed, the epochal anti-corruption movement led by Anna Hazare’s India Against Corruption was openly backed by much of the partisan media, especially "the nation wants to know" brand of self-righteous and pompous TV channels, with no qualms about basic norms of journalistic objectivity.

With Kejriwal as the jewel in the crown, it was the totality of the tacit bandwidth of the Sangh Parivar that consolidated the scaffolding of the campaign, which spread like wildfire across the nation, with a Commonwealth Games scam-tainted Congress regime finding the ground beneath its feet slipping.

While thousands of ordinary people joined the "Anna campaign", with Kejirwal on his right and Kiran Bedi on his left, forever waving the "tiranga" and shouting "Bharat Mata ki Jai", it was the octopus-like, hydra-headed fronts of the Sangh Parivar that formed the core of the campaign.

Every reporter at Ramlila Maidan with his/her nose to the ground, could see the tangible presence of the ABVP, VHP, Bajrang Dal, BJP and sundry Hindutva groups working their way to create a mob frenzy, which bordered on a "putsch" against the clueless Congress government.

It was also as clear as daylight that many of the other jewels in the crown who were leading this renaissance were directly or indirectly aligned with the Sangh Parivar: Govindacharya, Baba Ramdev, Sri Sri Ravishankar, if not "Gandhian" Anna himself (Have you heard Anna issue one critical statement against Modi or the BJP since May 2014?).

The strategic shift was that the crowd was made to wave the "tiranga", not the "bhagwa" (saffron) jhanda of the RSS.

A brilliant move to break and weaken the Congress government, this campaign finally found its victory in the resounding defeat of the grand old party, which had already lost the Lok Sabha battle in 2014, even while Modi, backed by the corporate, unleashed his "manufactured consent" across "live" TV channels, surprisingly, mostly, without commercial or ad breaks.

It happens rarely in history, and it is dark irony that while Manmohan Singh was the original protagonist of liberalisation/globalisation, Modi was pushed as the new muscle-flexing messiah and magician of capitalism by the corporate, even while Singh was still the PM of the nation.

Surely, with the Congress turned into a weakling, and their purpose achieved, Kejriwal had to find new symbols to restore his political identity. So, he chose Varanasi to contest against Modi, positing himself as the only and real fighter on the ghats that were resounding with slogans of "Har Har Modi, Ghar Ghar Modi".

Since then, the goal posts of the unrequited love have changed. It seems more like "love jihad".

Dumped and humbled by AAP, both Modi and the BJP took it to heart and never forgave it for riding on their shoulders and thereby flying on the planks of ethical purity, secular plurality and high morality.

That the party, despite being hounded and crippled in Delhi by the Modi regime, has managed to do reasonably good work among the poorest of the poor, and especially in terms of health, women’s rights and education, has rubbed salt on the BJP’s wounds.

That dogged AAP leaders and the cadre have refused to succumb to the routine condemnation and terror unleashed on them - this has not been happy news for the BJP top brass.

That Kejriwal has squarely blamed Modi for the suffering endured by AAP in this daily obstacle race isn't lost on the collective conscience.

Add to this the probable "clean sweep" in Punjab by AAP, where demonetisation was not even discussed because “Modi is no factor”, the tough fight in BJP-ruled Goa, and the launch of "Mission Gujarat" to take on Modi in his home turf. With the Congress as clueless as ever, the battle seems to be turning gladiatorial.

Indeed, it is not a historical aberration. There are similar historical coincidences of rainbow coalitions suddenly emerging and capturing the public consciousness in moments of national crisis and hopelessness.

Win or loss, with no-baggage or burden of the past, with a one-party leader, and a flexible and fluid ideology which can take the shape of liquid in a glass container, AAP as a "change phenomena" is a stunning success in the pan-Indian political landscape.

Hate it or love it, AAP has arrived. That is why, the Bhagwant Mann metaphor used by Modi, even in poor taste, is truly a sign that the BJP is losing both the plot and the narrative.

Surely, in such circumstances, one can only say: Cheers!

Also read: Why AAP is the future of Indian politics

#Arvind Kejriwal, #BJP, #Narendra Modi, #AAP
The views and opinions expressed in this article are those of the authors and do not necessarily reflect the official policy or position of DailyO.in or the India Today Group. The writers are solely responsible for any claims arising out of the contents of this article.