There is something about the hibernal air during Christmas and New Year. It is cooler if you are in Mumbai, and freezing cold if you are in Delhi. The holiday season kicks in, and there are weddings galore to add to the merriment, an excuse for the excessive consumption of high-calorie delicacies.

The desserts in particular are irresistible, but that is not just a seasonal aberration. It's a chronic predicament for those who need a sugar rush to look and feel incandescent. 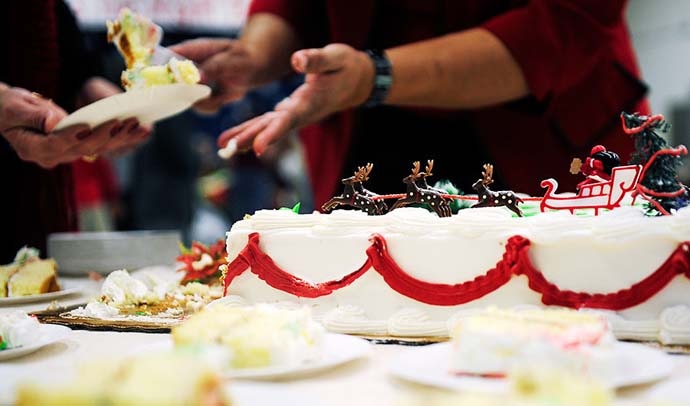 Christmas delicacies are irresistible. But how sweet are these today? (Source: Reuters)

The Christmas cakes and puddings (honestly, I struggle to decipher the fine distinction other than that one appears to be more drunk on rum) with hot custard can melt even the most impassive heart. I am a teetotaller but I have heard those who love their alcohol say that it just keeps you warm.

(I was not born yesterday to buy that codswallop justification for a tipsy evening, but to each his own!)

However, what I truly love about the end of the year’s joyous revelries is that we celebrate it with passionate gusto and unalloyed freedom. My driver of over two decades from Uttar Pradesh wishes me merry Christmas, as does the security guard from the rural interiors of Maharashtra. That is quintessential secularism which binds 16 per cent of the world’s population in one multicultural, religiously diverse country, called India.

But, as we come to the end of 2018, the ‘othering’ project continues to march remorselessly on, like a juggernaut that wants to crush even an iota of demarche. Legendary film actor Naseeruddin Shah perhaps experienced the reverberations of this sinister march. He did not have the luxury of making a witty take, Jaane Bhi Do Yaaro! Shah expressed his anguish and apprehensions about the state of law and order in our country, referring to the merciless killing of police officer Subodh Kumar in Bulandshahr, Uttar Pradesh. Congressman Shashi Tharoor had earlier famously remarked that it was safer to be a cow in India than a Muslim. As the brutal lynchings since Narendra Modi took over as Prime Minister manifest themselves, he touched a raw nerve among extreme right-wing fundamentalists, driven by their visceral hate for those who wear skullcaps. Shah articulated a similar solicitude for the slain police officer’s sacrifice in a state where law enforcers themselves have apparently gone violently rogue courtesy political benedictions.

It was allegedly an orchestrated conspiracy to rachet up the communal temperature. The perpetrators were apparently cow vigilante groups. Creating social divides along religious lines has harvested bountiful electoral bonuses for the BJP in the past. Shah was echoing the suppressed sentiments of millions of people, not just the Muslim minority community that he belongs to.

Aamir Khan was nastily trolled too, as have been many others, for giving vent to such escalating fears. The kangaroo court carries out a swift trial and gives its damning verdict in a nanosecond; you are an anti-national. Superstar Aamir Khan was incessantly trolled for saying he felt unsafe in India. Everyone missed the message, of course. (Source: Reuters)

Shah was hectored inexorably and promised a grand farewell dispatch to, yes, you guessed it right, Pakistan. Overnight, the man whose theatre histrionics and celluloid performances have inspired generations of hopeful artistes became a treacherous character, guilty of seditious conduct. It seems sometimes that we are living on a hitherto undiscovered alternate planet.

Democracy may not be completely dead yet in India, but it is on life-support.

Shah is a celebrity victim, but there are many others who have meekly surrendered to authoritarian bullies and imposed self-censorship.

On a WhatsApp group that I'm part of, someone posted a column critical of Modi, written by a nondescript author on a relatively unknown blog portal. But within minutes, someone advised him to delete the post, with the warning that ‘Big Brother’s’ hidden mole in the group could perhaps target him for propagating slander.

I was flabbergasted at the unconscionable level of intimidation to which people have begun to adapt.

The fact that snooping by powerful government agencies is being brazenly legitimised and online patrolling given official approval under the broad pretext of 'national security' should worry all those who believe in individual freedoms and democratic dissent.

Remember, the Narendra Modi government argued before the Supreme Court that the Right to Privacy was not our fundamental right. In the Supreme Court, the Narendra Modi government had argued that privacy was not a fundamental right. (Source: PTI)

In an interactive chat with former Jawaharlal Nehru University (JNU) president Kanhaiya Kumar in Mumbai last week, I asked him about the alarming toxicity in India and the deliberate fuelling of polarisation politics.

Kanhaiya’s stunning diagnosis of the situation is worth recalling: “If the Prime Minister of India uses kabristan-shamshan in an election speech to fracture society and win votes, it means that we are even being divided in the period of maximum grief; death. This is political immorality at its conceivable worst.”

Our public discourse is currently at a nadir. So, why are we surprised at the disparaging abuse of Shah? Because the BJP’s game plan is apparently to gradually disassemble society and make every climbdown a new normal. At some point, we are numbed into nothingness.

On that sombre note, a happy new year.

Because the ultimate human emotion that is indestructible is hope.

Also read: Naseeruddin Shah’s views on being an Indian Muslim cannot be dismissed