When the real world and the parallel world collide, even the seemingly smart ones tend to sound stupid.

Naseeruddin Shah has been angry for far too long. In his earlier days, he seemed to have enough angst to change the world. And change he did. He used his anger and, dare I say, frustration towards the order of things, which refused to consider him star material and relegated him to the "actor" bracket. He distilled this primal emotion to come up with performances that acknowledged him as a powerhouse of talent. He was, in fact, the antithesis of the fabled angry young man that commercial cinema had come to identify as the new hero in the early-1970s. Also, thanks to the burgeoning parallel cinema movement that was coming of age between the late-1970s and mid-1980s, Shah became a more organic variation of the angry young man. This might have been an unfair world, but Shah created his own universe and unlike the imagined alternate spheres that actors often tend to fabricate, this world where Shah was heir presumptive was far from imaginary. 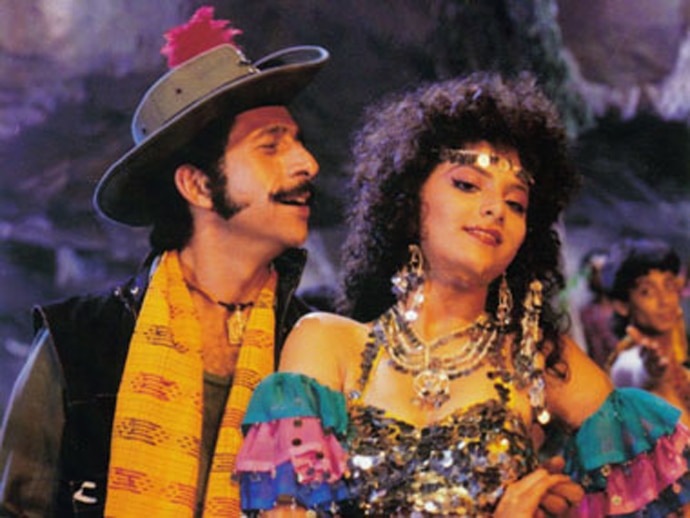 In a trade that was disdainful of trained actors, Shah was the first amongst equals to change this notion. Such was Shah's renown that his mere name when attached to commercial films brought about a veneer of respectability. For a better part of the 1980s, he was in the enviable position of being the first name to be considered for interesting supporting roles, the second lead or even the lead in popular films while continuing to be the first choice for most art-house filmmakers. He attracted roles worthy enough of the artist tag within the realm of commercial cinema along with hefty paychecks that allowed him to be a part of passion projects of many up and coming filmmakers such as Vidhu Vinod Chopra. But Shah's anger towards the very world that embraced him refused to die.

He seemed miffed at being considered somewhat, for the want of a better word, inferior to the stars that became legends by merely prancing around trees. You see, after all he was the "real" angry young man and unlike the Vijays of Zanjeer, Deewar, Trishul and Kala Patthar people were really invested in him and even probed the reason for his rage in Albert Pinto Ko Gussa Kyon Aata Hai. Further effort was expended in Aakrosh, but like commercial cinema where Amitabh Bachchan's angry young man became the penultimate hero, parallel cinema saw Om Puri’s, a constant colleague of Shah's, rage in Ardha Satya become the calling card. With Aamir Khan (left) in Sarfarosh.

Between the time he got disillusioned with the parallel cinema movement that practically created the aura of Naseeruddin Shah, and jumped into the throes of commercial cinema, Shah found time to get angry with Richard Attenborough for leading him up the gum tree. Shortlisted and flown to London for a final round of audition, Shah, was one of the contenders to play the Mahatma in Gandhi but the actor later deducted that everything was stage-managed because Sir Dickie had already made up him mind about Ben Kingsley but didn’t want to announce a non "Indian" playing the role right away. Back home, Shah continued to be the crusader of fine arts so much so that he didn’t respect the great Dilip Kumar enough during the making of Karma and some of the scenes featuring the two were shot separately. But nothing succeeds like success and popular Hindi cinema continued to pursue Shah, unlike its chase for any other art-house actor.

One would find it almost impossible to imagine Shah filling in for Eddie Murphy in the fish-out-of-water Beverly Hills Cop's Hindi remake, Jalwa (1987), but he did it aplomb and the film ushered in a new phase for the actor. Rather than simply showing up to play a narcotics cop, Shah made an effort to look the part and hit the gym even though he doesn't think highly of the whole method acting business, which he calls the Brando-esque "nose picking, bum scratching" kind of acting. But suddenly, Shah became a new kind of action star and both fans, as well as the trade, welcomed the more than noticeably visible transition. A few years later, Tridev happened and Shah even had a chartbuster, "Tirchi topiwale", to his credit and never really looked back. As Mirza Ghalib in Gulzar's TV series of the same name.

When compared to his initial days, when the prospect of becoming an actor would have been too alien, the time since he debuted on the silver screen with Shyam Benegal's Nishant (1975), there is no real reason for Nasseruddin Shah to be angry with the way things turned out. He's been a part of some of the greatest films ever made in India and at the same time he's been lucky enough to continue doing theatre, which he considers to be his true love, while making enough money from Bollywood that run the kitchen fires and more than pay the bills. He's even managed to do television in between and not just any TV but a role that immortalised Ghalib with Gulzar.

But Shah is angry with commercial cinema for not thinking of him and his repertory pals as worthy contenders, he is irritated with parallel cinema for not going to the next level, he's miffed at Hollywood for thinking too highly of itself even though he happily chased the part of Captain Nemo in The League of Extraordinary Gentlemen just to be a part of a big Hollywood production. In short, he is angry with just about everything. Now, he is angry about the state of the nation and believes that he was targeted for saying good things about Pakistan because he's a Muslim. Shah believes that he is loved in Pakistan and the kind of reception that the Shiv Sena laid out at the launch of a book by former Pakistan foreign minister Khurshid Mahmud Kasuri, an event that Shah attended with a host of columnists and intellectuals in Mumbai, would have never been meted out to an Indian in Pakistan. On the sets of his theatre production Ismat Apa Ke Naam.

Post his comments that invited a backlash on social media, Shah believes that he need not prove his patriotism to anyone just because he thinks Imran Khan is a great cricketer. No one's doubting Shah's patriotism and truth be told no one's interested. Like the times in the past when Shah waxed eloquent about someone or something not being up to his mark, this time, too, reams were dedicated to him and his issues. But going beyond the obvious, the basic fact remains that perhaps Shah needs something or someone to be angry at or else how's he going to fuel the artiste within. When Shah disses a film or an actor, people listen because irrespective of whom the target might be Shah is more than worthy of making such statements.

When Shah mocks an actor even if it's a Dilip Kumar or an Amitabh Bachchan or filmmakers ranging from Hrishikesh Mukherjee to Saeed Mirza to Subhash Ghai, he has every right to because he is, to put it mildly, a brilliant actor and a great performer. But as one doesn't throw the baby along with the bathwater, Shah must realise that his pro-Pakistan stance or his belief that "Indians are being brainwashed into believing that Pakistan is the enemy" is really inane. No one believes that average Pakistani is the enemy that needs to be annihilated, but this regular Pakistani is different from the ISI, military or the Hazif Saeeds who don't love Shah "unconditionally" or isn't "nuts about out stars such like Salman or Shah Rukh". In case Shah requires a refresher course on these, all he needs is a sit down with elder brother Lt General Zameer Uddin Shah (Retd), who last served as the deputy chief of army staff and also took part in the famous Battle of Longewala in the 1971 India-Pakistan War.

There is nothing new about Naseeruddin Shah being angry with something. He can be vexed with Sarfarosh for no real reason and a few years later when nothing that he does seems interesting he can praise the role to high heavens. He can think that Dara Singh is a great actor; Dilip Kumar's greatness limited to a few films he was a part of, especially Ganga Jumna, and that Bachchan never did a great film. He can be angry with the people who gave him work, dismiss great cinema even if he were a part of it but at the same time charge the skies for frolicking in drag with falsies et al in Tahalka as if it were great art. Actors tend to create a parallel world where things function the way they deem fit and unfortunately when the real world and the parallel world collide, even the seemingly smart ones tend to sound stupid.

Naseeruddin Shah's anger paved the path for some matchless performances and, if nothing else, this once his diatribe might just inspire him to rekindle the ghost of yore. God knows we need the vintage Shah... I mean have you seen his recent performances?

#Sudheendra kulkarni, #Pakistan, #Naseeruddin Shah
The views and opinions expressed in this article are those of the authors and do not necessarily reflect the official policy or position of DailyO.in or the India Today Group. The writers are solely responsible for any claims arising out of the contents of this article.