I am also an anti-national in the neo-nationalism of the land, what will be done to me now?

A couple of weeks back, in early February, I went to watch a film in the cinema hall after a considerable gap — it was Shah Rukh Khan's Raees, an unexpectedly moving, true-to-life story of alcohol mafia in Gujarat and politics with just the right amount of clean, but subtle twists to keep it from becoming dull.

A theatre is just the sort of place for a film like Raees, and I'm glad I went. But before the film could begin, as I watched the trailers with popcorn and Pepsi in my lap, the national anthem was to be played.

There is an order by the Supreme Court since December that makes it mandatory for all cinema halls to play the national anthem before the screening of a movie. But because I had not stepped inside a cinema hall since then, and because I am not used to it being played in the cinema hall, I was taken by surprise.

As the lights dimmed and, I looked around in confusion, my companions, my mother and my aunt, reminded me of the new rule. 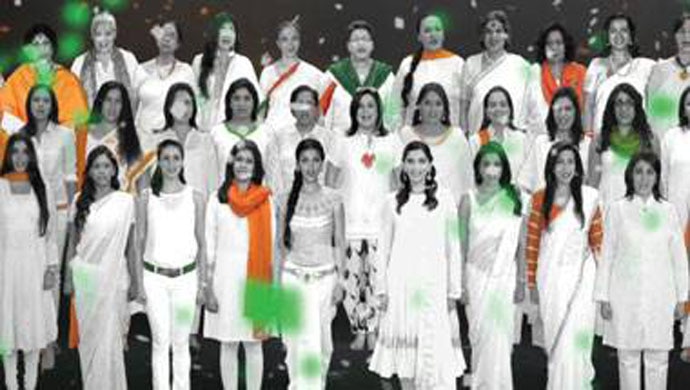 It is my right and liberty to live as I believe, the state or any individual cannot impose it on me. Photo: Screengrab

The people in the theatre were nice. Nobody reported me, or took the law into their own hands and threw me out — as had happened to a moviegoer in Mumbai — or bashed me up like a paraplegic moviegoer was in Mumbai, where the national anthem rule in cinemas has had precedence before the SC order.

Members of my family, who I was with, also did not argue with me. The two women looked slightly taken aback when I told them I would not be standing up for the anthem, but quickly rose themselves and did not ask any questions. We watched the rest of Raees without a hitch.

Why I recall this — and my reasons for not standing up for the national anthem — now is due to the recent re-eruption of the "nationalism" debate in the national discourse with the hounding of Gurmehar Kaur for standing up to ABVP (and some DUSU students) for obstructing an event in Ramjas college over "nationalism".

The nationalist debate was reignited and caught fire after the BJP's win, but it is not a new one — the Congress also prides itself on "nationalism", with a Congress MLA joining with the BJP to force the suspension of an AIMIM politician in the Maharashtra Assembly who protested the forcible pronouncement of "Bharat Mata ki jai".

I once did a Twitter quiz where I asked respondents if I should stand while brushing my teeth early morning, when the children in the neighbourhood school sing "Jana Gana Mana", or carry on with my tasks.

To my mind it was a jocular quiz, I wrote it in half jest, but to my surprise an overwhelming number of those who took the poll thought I should stand at attention (of course, I continue brushing my teeth to the day). The national anthem in cinema halls nationally itself has a precedence — it was made mandatory after the India-China war of 1962, but discontinued in 1975 after cinemagoers didn't pay the rule much attention.

The Ramjas controversy has made me think of my own defiance of mandatory nationalism — and I do not regret it.

I cannot take refuge in ailment of any sort — the government has said those with disability don't have to stand, though they must remain still during the anthem — though I have a back problem, otherwise I am hale and hearty. I did not stand during the national anthem because I hate the anthem.

It's a nice anthem, as good as any other, and personally it holds some value for me as it reminds me of the discipline of childhood, and as a cultural symbol it makes me feel glowy inside when I hear it played every year on Republic Day on TV, as a reminder of our shared heritage, the unity in our diversity — and hearing it once a year as a ritual is something I even look forward to.

Nor do I hate nationalists, necessarily — my feelings towards nationalism are the same as those towards the other artificial construct, religion. If nationalism or religion gives someone a high, I do not oppose it.

I am tolerant towards both, except when they are forced upon me, or others, as the Supreme Court has done with this order.

My resistance, both instinctive and studied, towards the forced adoption of symbols "of motherland" in routine, daily life as the Supreme Court said in its order, or of religion as "Bharat Mata ki Jai" suggests due to the Hindu goddess' imagery — that some demanded be made a mandatory slogan —  does not come from a hatred for the country or of any faith.

Both my father and my grandfather are Army men, the latter being a decorated war solider owing to his role in the famous battle of Asal Uttar. My mother is from a devout Hindu family in Haryana whose members have prayed daily, just as she continues to do.

Yet, neither nationalism nor religion has been forced upon me by members of my family.

Both have stressed the role of values, but not of any symbolism, so why should the state? Owing to the profession I chose, I am a dedicated anti-ismist, having declared allegiance to none, including country, faith, family or even ideology.

This is an ideal in journalism and while it is not possible to say whether most of us journalists are able to achieve it in our commitment to objectivity without fear or favour, many of us have certainly aspired to it and should have the right to do so.

In fact, unlike most journalists who may call themselves "humanists", I can't even claim that — as an animal lover, I am anti-speciesism and do not believe humans have superior rights.

I am sometimes mocked for my beliefs, especially as a practising vegetarian, but while I tolerate that as majoritarian bias, I would not allow, like with nationalism and religion, that speciesism be thrust upon me.

It is my right and liberty to live as I believe, the state or any individual cannot impose it on me. Owing to my upbringing as well as my choice of lifestyle and career, and my beliefs, standing up for the national anthem to profess undying love for country above all else goes against my principles.

It also goes against the teachings of our founding fathers such as the Mahatma, whose Experiments with Truth had a great impact on me when I read it in childhood — it is one of Gandhi's foremost beliefs that keeping one's speech and actions in accordance with one's thoughts is the highest aim for individuals.

Singing the national anthem with popcorn in my mouth, feeling lust for Ranbeer Kapoor as he takes off his shirt in a trailer on screen, is not a match my brain can cope with — a cinema hall, unlike a Republic Day parade, is not conducive to even invoking cultural sentimentality, if not die-hard nationalism, for me at least.

I am of the belief that there must be meaning to everything one says or does. With the upsurge in nationalism under the Modi government, where people are being targeted for not wearing badges of nationalism, and for not wearing their patriotism on their sleeve, I believe my principles hold true now, more than ever.

It is also the dignity of individuals to live as per their values and beliefs, without having to forcibly declare them for the benefit of others, especially mobs, as it happens in right-wing environments, as we have seen, where some people with certain backgrounds have to prove themselves more than others.

My resistance may not be in accordance with the rules of land, but I do not believe I am breaking any moral laws.

If anyone, the honourable Supreme Court must answer why I must be forced to be on the wrong side of the rules without having done anything wrong at all.

Post your comment
#Patriotism, #National Anthem
The views and opinions expressed in this article are those of the authors and do not necessarily reflect the official policy or position of DailyO.in or the India Today Group. The writers are solely responsible for any claims arising out of the contents of this article.