Supreme Court’s ruling spells a death knell for the song written by Rabindranath Tagore, one of the fiercest ever critics of nationalism.

If Supreme Court of India is to be believed, and can we, in all earnest, disregard what the apex judicial body in the country says, the national anthem has something to do with this new term called "constitutional patriotism", and it can be amply demonstrated if it is played in cinema halls, and if we all not fail to stand up when it plays.

It's one thing to have an arcane law called Prevention of Insult to National Honour Act, 1971. It's quite another thing to have the Supreme Court mandate that the national anthem must be played at an arbitrarily chosen venue - the cinema hall, ostensibly for its audiovisual purposes, the best tool for propaganda - and that we must, must display our patriotism by standing up when it does. No stand-up comedy: SC has turned the national anthem into a matter of forced patriotism. [Photo: Agencies]

Not only that. Supreme Court also says that we cannot dramatise the national anthem, or use it for commercial purposes, as if these are set in stone conditions, that may or may not be subject to interpretation. As I see it, this new ruling would prevent many a creative channelisation of the national anthem.

When we had incidents of people beating up a wheelchair-bound man, or a Muslim couple, for not standing up when the national anthem was played in the theatre, some of us staunchly defended that no law was broken by the non-action/incapacity of those concerned to stand up and show respect. But now, even that defence has been taken away from us. 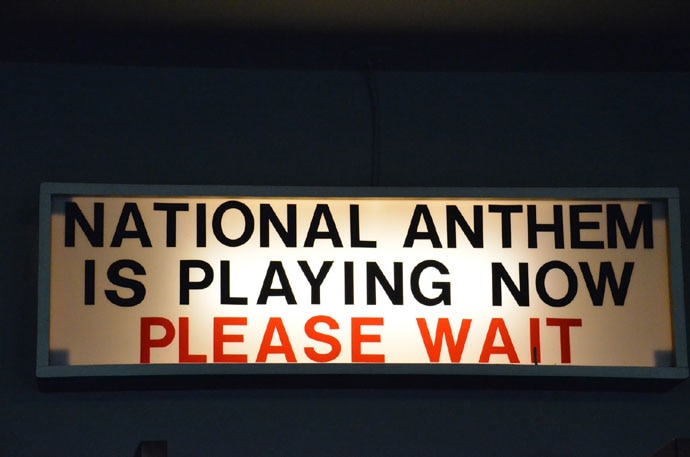 Compulsory playing of the national anthem before movies in cinema halls is a bizarre idea that could seriously jeopardise civil liberties in India. [Photo: Google]

It is unfortunate when patriotism becomes a matter of daily drill to be carried out at the behest of the State/Court, and not something that comes as a response to true greatness, which, for a country, can only be expressed through the wonders of a healthy, thriving democracy.

It's doubly ironical because the author of India's national anthem, Rabindranath Tagore, was one of the fiercest ever critics of the narrow definitions of nationalism. I remember our school assemblies would include both Jana Gana Mana and Where The Mind Is Without Fear, both by Tagore, so that the "national pride" to be instilled by the former was kept equally in balance and checked by the national skepticism induced by the latter. It was all about "wallowing in individually perceived notion of liberty"; it was about personal conception of intellectual and ideological freedom; it was about question and critiquing the nation and its nationalism when they got pernicious; it was about making the distinction between the State and the Country.

Tagore would have been horrified at the Supreme Court judgement that used the peg of "individual liberty" and its curtailment to pronounce a judgement that is not only shallow and hollow, but in fact, lessens the stature and the boundless scope of the national anthem, a song so beautifully federal and democratic in spirit and intellectual expanse.

It's poetry at its most elevated. A song and a poem. An anthem and a fury. A beauty and a beast, of nationalism, and its limit.

Supreme Court, in its bid to mandate the anthem at cinema halls, where an assembly of people would rise and fall to the newly imposed prefatory compulsion, and then may be consume a ribald sex comedy, or a movie about cross-border terrorism, or even a film in which hypernationalism will be critiqued - a film such as Satyajit Ray's Ghare Baire, based on the eponymous Tagore novella, in which the character Sandip is shown to hide behind the excesses of the Swadeshi movement for his own petty, personal interests.

Can a filmmaker depicting Ray pondering on how to make Ghare Baire not show the auteur not tinkering with Jana Gana Mana, stretch its awesome imaginative ends, tweak its immortal beauty, and expand the scope of understanding? What happens to creative exploration of a song that is so built into our collective psyche, our shared memories of Indianness?

And, why wouldn't those alienated by the Union of India, those at the margins of India's military and centralist sway, those whose lands have been taken away and whose rivers have been poisoned and whose trees have been felled and whose sons killed and daughters maimed, sexually violated, murdered - why wouldn't they have at least the right to wallow in their individually perceived (lack of) liberty and vent it at the national anthem?

When Supreme Court of India in December 2013 recriminalised homosexuality by overturning the Delhi high court order that had read down Section 377 of the Indian Penal Code, it was one such moment of trust in the judiciary being unimaginably betrayed.

Today, the mandatory insertion of the national anthem into the mostly popular and irreverent act of movie-going has made many a collective joy into a chore, an activity we consent to only because we are left with no choice.

Also read: Why stop at cinema halls: 10 places where national anthem should be made mandatory

Post your comment
#Nationalism, #Supreme Court, #Patriotism, #National Anthem
The views and opinions expressed in this article are those of the authors and do not necessarily reflect the official policy or position of DailyO.in or the India Today Group. The writers are solely responsible for any claims arising out of the contents of this article.