India at 70: Tagore rejected 'nationalism' — and his worst fears have come true

A century later, his book 'Nationalism' reminds us: The nation is the greatest evil for the Nation.

Nationalism, an important book by poet-laureate Rabindranath Tagore, was first published one hundred years ago in 1917 from Macmillan in United States' New York. After hundred years of its publication, the book has become all the more contemporary in the Indian context. Nationalism was translated into English from the Bengali by Tagore himself - and the first volume included three lectures delivered in Japan, in 1916.

The editor of the 2017 volume, Nirmal Kanti Bhattacharya mentions in his introduction that, in 1992, a new edition of the book from Rupa Delhi, edited by EP Thompson, had five poems of the Tagore collection Naivedya - which were deleted without explanation.

Sisir Kumar Das, in his edited 1996 Sahitya Akademi edition, restored one poem, which is reproduced in the latest version of the book. However, Bhattacharya does not tell us about the four other poems and why they were not restored.

Tagore wanted to dedicate the 1917 edition to then US President Woodro Wilson, but was not allowed to, as he was then thought of "being involved in anti-British plots hatched by Indian revolutionaries (Ghadrites) in America". Tagore is very clear that a naturally-built human society is much more humane in essence than the so-called artificially created nationhood.

The volume concludes with the Tagore poem - "The Sunset of the Century" - written on the last day of last century, meaning the eve of 1900 or 1899 evening. However, the volume leaves out the dates and venues of lectures delivered, though the year 1916 - from May to September is mentioned.

The lectures - ahead of their time

Tagore boldly declares in his first lecture that "We are no nation ourselves!"

He questions the western concept of the nation, which holds, "A nation, in the sense of political and economic union of the people, is that aspect which a whole population assumes when organised for a mechanical purpose. Society as such has no ulterior purpose. It is an end in itself. It is a spontaneous expression of man as a social being. It is a natural regulation of human relationships, so that men can develop ideas of life in cooperation with one another. It has also political side, but this is only for a special purpose. It is for self-preservation."

Tagore is very clear that a naturally-built human society is much more humane in essence than the so-called artificially created nationhood. 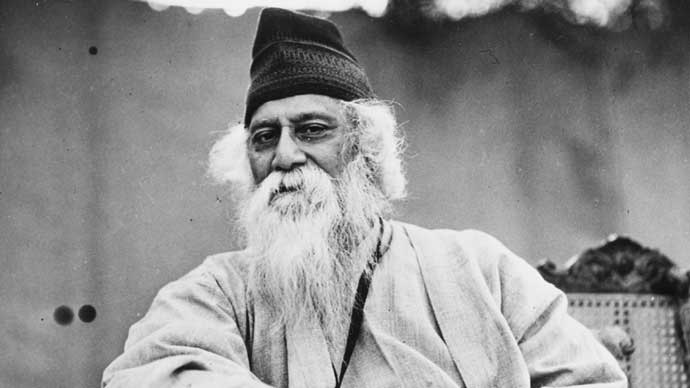 'All national histories are merely chapters in the larger one. And we are content in India to suffer for such a cause.'

The present-day nationhood would have been considered "evil" by Tagore, who wrote: "When this organisation of politics and commerce, whose other name is Nation, becomes all powerful at the cost of the harmony of the higher social life, then it is an evil day for humanity."

Tagore found Indian nationhood to be abstract in 1916 - which has only worsened in 2017.

In this nation, "Punishments are meted out leaving a trail of miseries across a large bleeding tract of the human heart."

Taking the example of the British nation whose government as a nation, he rues that it is "organised self-interest of a whole people, where it is least human and least spiritual".

He asserts that "this nationalism is a cruel epidemic of evil that is sweeping over human world of the present age, eating into its moral vitality".

During the time these lectures were delivered, the World War I was on and World War II was to follow, in 1939-45, bringing into focus the extreme nationalism of Hitler and Mussolini - which caused, perhaps, more than 10 million deaths.

That is why Tagore warned of nationalism as an "evil epidemic"! In the same breath, the social thinker-poet continues to warn against this evil: "The nation is the greatest evil for the Nation, that all its precautions are against it, and any new birth of its fellow in the world is always followed in its mind by the dread of a new peril!"

Tagore did not see the birth of Pakistan in 1947 and the liberation of Bangladesh in 1971, but he foresaw their consequences, which, unfortunately, proved him right as all his fears about nationhood came true.

In prescient words written more than hundred years ago, Tagore depicts the reality of the politicians of the "nation" of 2017: "And the idea of the Nation is one of the most powerful anaesthetics that man has invented. Under the influence of its fumes the whole people can carry out its systematic programme of the most virulent self-seeking without being in the least aware of its moral perversion - in fact, feeling most dangerously resentful if it is pointed out."

In the present Indian state, this aptly applies to the conduct of the cow vigilantes and "Bharat Mata ki Jai" brigades. Tagore could see it hundred years before - and that is what you call the foresight of great poets! Tagore questions the idea of political nation, if it does not bring freedom of mind, he says: 'Political freedom does not give us freedom, when our mind is not free.'

Tagore had raised a fundamental question: Does world humanity need "Nationalism or Humanism"? While there has been no concept of "Nationalism" in civilisational history as such, humanity has crossed various stages of life from barbarism to cultural living values, from no ownership to common natural property of our entire humanity, to the highly corporatised one per cent property holders against 99 per cent who are deprived of minimum property at the global stage.

In the name of nationalism and racial purity, humanity has suffered two world wars and South Asia has suffered one million killings in 1947 with the Partition and the creation of the new nation state of Pakistan - with 10 million people suffering untold miseries of displacement.

In his second essay, "Nationalism in Japan", Tagore emphasises the ancient culture of Japan, more than its nationhood.

In this lecture, Tagore questions European values of science and modernity and expresses his own idea of modernity: "True modernism is freedom of mind, not slavery of taste. It is independence of thought and action, not tutelage under European school-masters. It is science, but not its wrong application in life."

In his third lecture, "Nationalism in India", Tagore opines that the real problem of India is not political, but social. Here he comes closer to Ambedkar's ideas on the Indian society.

Tagore rejects the idea of "national history" even: "There is only one history - the history of man. All national histories are merely chapters in the larger one. And we are content in India to suffer for such a cause."

In the Indian context too, Tagore comes heavily on national jingoism: "Nationalism is a great menace, it is the particular thing which for years has been at the bottom of India's troubles. And in as much as we have been ruled and dominated by a nation that is strictly political in its attitude, we have tried to develop within ourselves, despite our inheritance from the past, a belief in our eventual political destiny.

Tagore questions the idea of political nation, if it does not bring freedom of mind, he says: "Political freedom does not give us freedom, when our mind is not free."

Tagore's book is a bold, rational and humane critique of the idea of "nationalism", which has caused so much misery in the world and continues to do so.

Presently, the United States under Donald Trump, Turkey under Recep Erdogan and India under Narendra Modi are making ordinary citizens suffer immensely in the name of the "evil epidemic" that Tagore's words warned us of!

As to when the people of these countries and the world will awaken from the slumber induced by the "most powerful anaesthetics" - again in the words of Tagore - is difficult to predict. But the poet's small book on "nationalism" is a powerful antidote to such "anaesthetics"!

Nationalism needs to be read and its readings must be held in mass gatherings.

#Rabindranath Tagore, #Nationalism, #Independence Day
The views and opinions expressed in this article are those of the authors and do not necessarily reflect the official policy or position of DailyO.in or the India Today Group. The writers are solely responsible for any claims arising out of the contents of this article.