Navjot Singh Sidhu’s political career is a case study that establishes why popularity is not the sole determinant of success in Indian polity.

A top-order batsman, a riveting commentator, Navjot Singh Sidhu’s political career is a case study that establishes why popularity is not the sole determinant of success in Indian polity. In his own words, his career graph “reminds me of the cycle stand at the Rajendra Talkies, one falls and everything else falls.”

After hanging his boots as a cricketer, Sidhu plunged into cricket commentary. His quirky one-liners, off-the-wall analogies and spontaneous reactions with desi tadka continued to keep him in the public eye. With his popularity cutting across socio-economic and demographic planes, like several other celebrities, Sidhu too decided to leverage his existing celeb status and take the plunge into politics. In February 2004, in the run-up to Lok Sabha elections, Sidhu joined the Bharatiya Janata Party in the presence of Venkaiah Naidu in New Delhi. 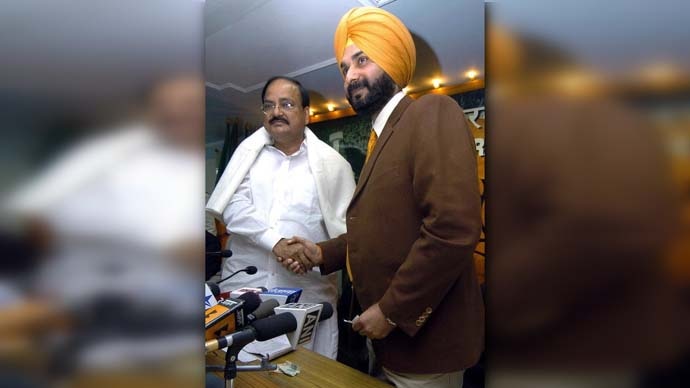 In February 2004, in the run-up to Lok Sabha elections, Sidhu joined the Bharatiya Janata Party in the presence of Venkaiah Naidu in New Delhi. (Photo: Getty Images)

15 years ago, when he was asked why he chose to join BJP, he said, “All parties are the same, but it is the line of thinking which makes a party good or bad. The swan and crane both live in the pond. While the former looks for jewels, the latter looks for fish. A party that does not progress is not a party. It is the constructive, positive thinking of the BJP that has attracted me to the party fold. It is a party that has galvanised progress and been a catalyst.”

During multiple interactions, Sidhu came across as a citizen who was not only convinced but also ready to take the ideology of BJP to the masses. He said that his association with BJP was unconditional and he was there to work as a simple worker. Undoubtedly, Sidhu had learnt the art of making politically correct statements and resort to subterfuge during public interactions, for it was only a matter of time before the mask fell off and his personal ambitions took centrestage.

Two months after joining the BJP, the party gave him a ticket from Amritsar, where he defeated the incumbent. However, in 2006, when he was found guilty of culpable homicide in a road rage incident, he resigned. In 2007, he won the by-poll, after the Supreme Court stayed his conviction, followed by a victory in 2009, with a significantly reduced margin compared to 2004.

Reportedly, in 2014, BJP gave Sidhu a choice to contest either from Delhi, Chandigarh or Kurukshetra, as the party had planned to field seasoned leader Arun Jaitley from the Amritsar seat. Being a master of communication, Sidhu obviously did not show any signs of rebellion or discontent. He had then said, “My relation with BJP and Jaitley is sacred. He is my mentor. A sacred relationship is about sacrificing. Whatever the party decides, I will welcome it. Sidhu won’t ask for anything, but make the sacrifice.” “My relationship with Jaitley is sacred. He is my mentor," said Sidhu. (Photo: Getty Images)

While it is no secret that Sidhu harboured personal ambitions, it was after he was denied a ticket from Amritsar that his angst and lust for power came to the fore. In April 2016, a visibly rebelling Sidhu was sworn in as a Rajya Sabha member. However, he was not content. With Assembly Elections in Punjab less than a year away, it was reported that he wanted to be a contender for the top spot, and when he couldn’t bargain for the same, he quit the party in July 2016. This was in stark contrast to the statements he made about his unconditional association and ideological commitment.

Before leaving the BJP, Sidhu said, “Vajpayee called me, Modi wave sank me.” This statement proved to be another case of false equivalence when the cricketer-turned-politician gave the former Prime Minister Atal Bihari Vajpayee’s final journey a miss, only to attend the swearing-in of his long-time friend Imran Khan. He could have rescheduled the visit and attended both — the funeral and swearing-in — only if Sidhu was less opportunistic and more courteous. Amid the strong rumours of him joining the Aam Aadmi Party, two months ahead of Assembly Elections, Sidhu joined Congress. While he called himself a “born Congressman”, this move by Sidhu was once again opportunistic and self-seeking. BJP-SAD was facing anti-incumbency and Sidhu had smelled an electoral loss. He did not join AAP after he realised the outfit enjoyed the patronage of those who also held pro-Khalistan views, which would be detrimental for his electoral politics. 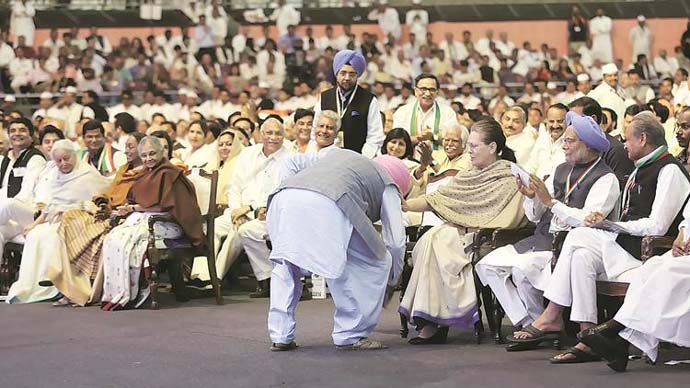 Sidhu not only sang paeans for Sonia Gandhi but also went on to touch her feet.  (Photo: Twitter)

Obviously, Captain Amarinder Singh, a veteran politician and soldier, had not fallen for the garrulous Sidhu. In 2017, when he was sworn in as the Tourism Minister, he was in for a rude shock since there was wide speculation of him being sworn-in as the Captain’s deputy. Known for his temper on the cricket field, in the political field, he has been conspicuous by lack of patience and pursuit for instant gratification. The reported tension in Punjab Congress was visible in the public when Sidhu publicly embarrassed his party by not just attending the swearing-in ceremony of Pakistan’s Prime Minister Imran Khan but also hugging Pakistan Army Chief, General Qamar Javed Bajwa. Captain was one of the first to pull him up, saying, “Every day our jawans are getting martyred. To hug their Chief General Bajwa; I am against this. The fact is that the man should understand that our soldiers are being killed every day.” Captain Amarinder Singh, a veteran politician and soldier, had not fallen for the garrulous Sidhu. (File photo: PTI)

Subsequently, Sidhu has been trying to create fissures between Captain and Rahul Gandhi by making statements like, “Rahul Gandhi is my captain, he sends me to various places,” in the hope of appeasing the Central leadership.

It was indeed an unfortunate day when Sidhu not only refused to condemn Pakistan for the dastardly attack in Pulwama, which killed 40 CRPF jawans, he also attacked Atal Bihari Vajpayee by raking up the Kandahar incident by asking, “Who released Masood Azhar?”

In his bid to oppose Modi (to please the Gandhi family) and outdo Amarinder Singh (he sent his letter of resignation from Punjab Cabinet to Rahul Gandhi), he revealed his myopic goals and desperation for power. Little did he realise that the Gandhi scion he was trying to enchant, would call it quits, and abandon him and the entire party to fend for itself after the debacle of 2019. With the 2022 Assembly Elections coming close, his ambitions once again have started getting the better of him. His recent attempt to send feelers to AAP once again reminded us of his inability to survive through a political test match, surely not the slog overs. Sidhu’s recent behaviour in the past few days tell a tale of how shifting allegiance with political parties does not modify the inherent composition of someone who is in public life for power, and power alone. What remains to be seen is if he will be able to pledge his loyalty to the Congress Party even if Captain Singh is the face of Punjab Elections in 2022.

Also Read | Honouring Thy Enemy: Navjot Singh Sidhu’s hug to General Bajwa, and a 200-year-old battle that respected the adversary