Honouring Thy Enemy: Navjot Singh Sidhu’s hug to General Bajwa, and a 200-year-old battle that respected the adversary

Of course, one can say with some conviction that while penning this couplet, noted Urdu poet Nida Fazli had no premonition that one day Navjot Singh Sidhu would hug Pakistan Army chief General Qamar Bajwa at a time when relations between the two countries are less than cordial. With the same conviction, one can also say that though Nida Fazli may not have anticipated this situation, the reaction it generated was perfectly imaginable to him. Hence, the couplet on the grace that can be maintained between adversaries grows even more important.

Sidhu is a senior minister in the Punjab government (next only to chief minister Captain Amarinder Singh). He has been heavily criticised for visiting Pakistan at a time when India has suspended almost all bilateral engagements, and more importantly, for hugging General Bajwa — a man who takes the final calls on Pakistan’s hostilities towards India.

On November 28, 101 days after hugging General Bajwa, Sidhu was in the news again.

He met the Pakistan Army chief again, along with Prime Minister Imran Khan, at the ground-breaking ceremony to mark the opening of the Kartarpur Sahib Corridor. Two days earlier, Sidhu patted himself on the back and boasted that his hug with General Bajwa helped the talks on the Corridor move ahead between India and Pakistan.

During the ceremony, he heaped praise after praise on Khan and said that his name will be remembered by generations to come whenever they read about Gurdwara Darbar Sahib in Kartarpur, Pakistan. In return, Imran Khan said he hopes that he doesn’t have to wait for Sidhu to become India’s PM for New Delhi and Islamabad to be friends with each other.

This has triggered a fresh controversy, with Sidhu’s opponents calling him a 'traitor' and a 'Pakistan sympathiser'.

The reactions to Sidhu’s bonhomie with Pakistan are diametrically opposite from what Fazli calls for in his couplet.

However, one may fairly argue that the world of letters is far rosier than the battlefield; that calling for decorum and grace towards your adversary is possible in the lofty realm of ideas, but the vagaries of the battlefield scream a different tone.

A battle fought for ages to come

This draws my attention to Dehradun in Uttarakhand — and a historic battle fought nearly 200 years ago. Now, Dehradun is not a city that comes to one’s mind during talks of Indo-Pak relations or battles and history. It rather evokes the image of a city that used to be an ideal retirement destination.

Among the natural attractions in this city, the sulphur lakes and limestone caves on its outskirts at Sahastradhara are much frequented by visitors. As you cross the hustle-bustle and drive towards Sahastradhara, on the right is a small historical wonder that goes by the name of Khalanga (also spelt as Kalinga) Memorial.

The year was 1814 and the British East India Company was on its expansionist campaign. After annexing the territories of the powerful nawabs of Bengal and Awadh, the Company was eyeing the Himalayan kingdom of Nepal — which then included parts of present-day Himachal Pradesh and the entire hilly region of Uttarakhand. The Company’s commercial interest apparently was in controlling trade with Tibet through the mountains.

When the Nepalese refused to surrender, the British decided to attack the kingdom from different fronts.

One of the most important among these was Dehradun.

The Battle of Nalapani fought in Dehradun kick-started the Anglo-Nepalese War (1814-16). Once the small, yet strategic, fort of Nalapani fell, others followed suit, until the Treaty of Sagauli was ratified in 1816 and the Gurkhas agreed to cede Himachal, Kumaon and Garhwal to the British.

Fought on the banks of the Rispana river, the Battle of Nalapani is among those that are tailor-made for folklore of military heroics. But besides this, it was a battle that set an example of the highest standards of military discipline, grace and decorum that warring armies can maintain in the bloodiest of battlefields.

Led by Captain Balbhadra Kunwar, the Gurkha army comprised 600 men — up against nearly 5,000 British troops under the command of Major General Rollo Gillespie.

The next 30 days were witness to the heroics, bravery and determination of the Gurkhas. The 600-odd troops (also comprising Himachali, Kumaoni and Garhwalis) defended the fort for a month, despite being outnumbered and poorly armed.

By the end of 30 days, the Gurkhas had nothing left to fight with. The few canons they had were damaged; their men, women and children were mostly killed; reinforcements did not reach them; supplies of food and water were cut by the enemy. They had inflicted heavy casualties on the British, but their own fort was full of unattended dead bodies. The handful still alive somehow managed to hoodwink the British and escape into the forest.

Today, this is regarded as one of the most significant battles fought by the Nepalese; Balabhadra is now part of Nepalese folklore and historians opine that this one battle established the reputation of the Gurkhas as a fighting people in the eyes of the British, who would be eager to recruit them. Conduct between adversaries in battle

Besides displaying great bravery and a strong determination to fight on, the Gurkhas also earned respect for their conduct during the Battle of Nalapani.

James Baillie Fraser, a Scottish traveller in the Himalayas whose brother, Willam Fraser, was a political agent to a senior British officer during the Anglo-Nepalese war, recounts the battle in his book Journal of a Tour Through Part of the Snowy Range of the Himala Mountains. It was published in 1820 (six years later) by Rodwell and Martin, London.

On the conduct of the Gurkhas, Fraser says that irrespective of their nature elsewhere, in the Battle of Nalapani, there was no cruelty to the wounded or those taken prisoners. He writes that no poisoned arrows were used, nor were any wells or water bodies poisoned by the Gurkhas. “No rancorous spirit of revenge seemed to animate them. They fought us in fair conflict, like men; and, in intervals of actual combat, showed us a liberal courtesy… far from insulting the bodies of the dead and wounded, they permitted them to lie untouched, till carried away; and none were stripped, as is too universally the case,” Fraser wrote.

In his book, Fraser re-enacts a scene from the battle that stands out as an example of how grace and trust between adversaries can be maintained, without compromising on one’s loyalty and duty towards one’s nation.

He writes that once a Gurkha was seen as advancing towards the British position and waving his hand. Seeing this, the guns ceased firing for a while and the man came into the batteries. His lower jaw had been shattered by cannon fire. He had come to his enemy’s camp to seek medical assistance.

The British responded by providing him all available aid. Later, when he recovered and was being discharged from hospital, he said he'd like to join his colleagues and fight the British again.

“[He was thus] exhibiting a strong sense of the value of generosity and courtesy in warfare, and also of his duty to his country–separating completely, in his own mind, private and national feelings from each other–and his frank confidence in the individuals of our nation, from the duty he owed his own, to fight against us collectively,” Fraser writes.

If the Gurkhas are to be praised for their conduct during the battle, the British troops earned their respect for what they did to honour their adversary after the battle.

Once the British realised that the remaining Gurkhas have managed to escape, the victorious troops razed the fort of Nalapani and erected two memorials.

The first was in the memory of their commander, Major General Rollo Gillespie, and other fellow troops. The second was in honour and recognition of the bravery of Captain Balabhadra Bahadur, commander of the Gurkhas.

What makes this otherwise mundane memorial in Dehradun unique is the fact that it was made by the victorious army to commemorate the bravery of its adversary. The inscription the British placed reads: 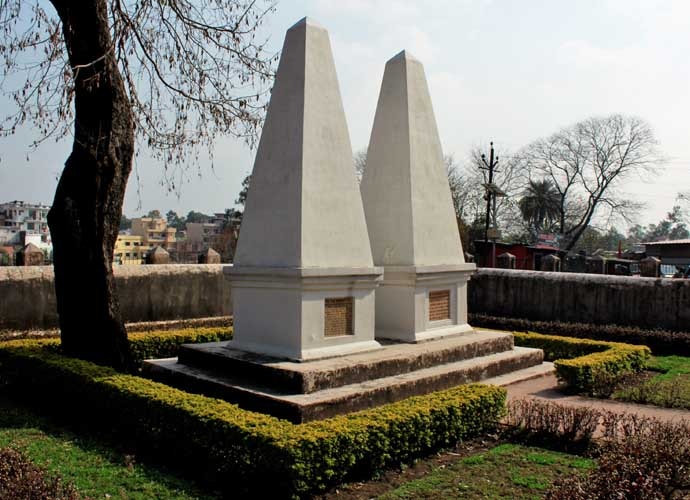 The obelisk installed by the British in honour of Captain Balabhadra Bahudur — commander of their enemy army. (Photo: Mukesh Rawat)

“This is inscribed as a tribute of respect for our gallant adversary Bulbudder (Balabhadra Kunwar), commander of the force and his brave Goorkas (Gurkhas)…”.

The other inscription is in memory of the British East India Company forces and talks of how the strategic fort of Nallapani was finally captured after two unsuccessful attempts.

Describing this memorial, the Archaeological Survey of India has also put up a plaque, saying that this is the only martyrs’ memorial of its kind in history, where the victorious army built a memorial in memories of their general — as well as the general of the adversaries to pay tribute to their courage jointly. 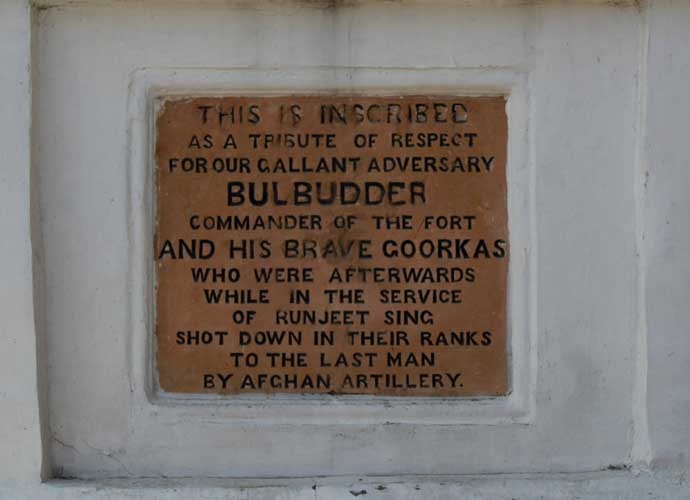 Honour Thy Enemy: A plaque installed by the Archaeological Survey of India in the Kalanga Memorial to describe its unique significance. (Photo: Mukesh Rawat)

What present-day hawks can learn?

It is a fact that throughout recorded human history, humans have always been at war with each other. War has been an unfortunate reality of our existence and its causes can be varied.

But despite this, is it not possible that our enmity is graceful? That even while engaging with our adversaries, we uphold some basic courtesy?

What happened in the Battle of Nalapani and the memorial erected after it presents a stark contrast to the present-day political environment in Pakistan and India. Historians will surely be able to come up with more examples where warring armies exhibited utmost grace and dignity towards each other.

And, of course, Nida Fazli was not the only poet to have addressed this issue.

Bashir Badr, another stalwart of Urdu poetry, did the same when he wrote:

It was perhaps with the same line of thought that former Prime Minister Atal Bihari Vajpayee led that historic bus trip to Lahore to improve ties with Pakistan. It was perhaps this willingness to give possibilities a chance that he later invited General Pervez Musharraf for dialogue, even though he had unleashed the Kargil War on India. And maybe, the sentiments were similar when Prime Minister Narendra Modi in 2015 visited then-Pakistan PM Nawaz Sharif on his birthday and hugged him warmly in Lahore.

Who knew that there will come a time when hugs — that warm and lovely gesture of greeting — would also become the source of spewing political venom?