Why NDA allies are revolting against BJP

The BJP's allies are fast deserting the sinking ship of NDA. While the N Chandrababu Naidu-led TDP is the first one to have quit the alliance, murmurs of discontent among other allies are becoming loud and clear.

After Naidu, signals of dissent have come from Ram Vilas Paswan’s Lok Janshakti Party (LJP). Chirag Paswan, son of Ram Vilas Paswan and an MP, has come out in the open to warn the BJP about consequences of antagonising NDA allies.

On March 16, Chirag said, “Allies are getting upset. If the BJP does not take its allies in confidence, 2019 could be a tricky road for the saffron party.” He made a very telling observation indicating allies’ loss of confidence in Modi, stating that “BJP comes to power where it is not in power, but retaining their own seats is becoming difficult.” 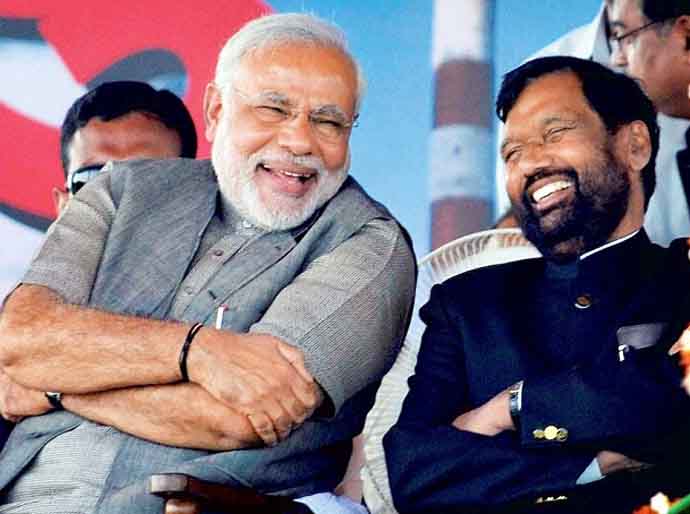 Modi may not be worried about the BJP’s 2019 electoral prospects in Andhra Pradesh, but he should listen to the alarm bells sounded by Naidu and Paswan. They are unlike BJP’s like-minded ally Shiv Sena, which uses bluster and blackmail as tactics to extract its pound of flesh but continue with the alliance.

The TDP and LJP leaders are among the first NDA allies to have begun posturing for 2019 elections. They have correctly read which way is the wind blowing (against Modi). They are among the smartest politicians who are adept at plucking low-hanging political fruits.

Paswan is the only politician who has held cabinet positions in all the coalitions since 1996. He was minister in the United Front, NDA and UPA, jumping from the losing combination to winning alliance at the right time.

He had resigned from the Vajpayee-led NDA government over Gujarat riots of 2002. When the public mood turned in Modi’s favour on the eve of 2014 elections, Paswan had conveniently forgotten Modi’s record of 2002.

Paswan junior hinted at the trouble brewing within the NDA in Bihar when he said that RSLP’s party leader Upendra Kushwaha too was unhappy and might quit the alliance. After Jitan Ram Manji, who joined the RJD-led grand alliance after quitting the NDA, Kushwaha too was likely to leave the NDA, Chirag Paswan claimed. Bihar RJD leaders too have claimed Kushwaha was unhappy within the NDA though the latter contradicted the claim in public.

Unlike the Vajpayee government, which faced constant troubles from NDA allies, Modi has had smooth sailing for the last four years. Barring Shiv Sena, most of the allies have kept their grievances within the four corners of the government even as the TDP has been making noises in demand of special category status for Andhra Pradesh.

The BJP didn’t have majority of its own during the Vajpayee government, which made it dependent for survival on allies. Now, its absolute majority in the Lok Sabha without NDA allies seems to have tied the hands of allies and smaller parties in expressing their opinion within the government and in public.

It’s not that allies have had no complaints. The fact is that Modi’s arrogance and non-consensual political approach have upset the allies, but they have been cautious and restrained against going public. They have been fearful of Modi and BJP president Amit Shah’s reputation for vindictiveness.

Modi’s abysmal failure in managing coalitions, his absolute disregard for what Vajpayee might have called observing “coalition dharma” through politics of consensus, have angered NDA partners on various issues.

Most of the partners make no secret of their anger in private over Modi’s unilateral decision to have gone for demonetisation. But series of electoral successes, most notably in Uttar Pradesh have, confused NDA partners and made them believe that Modi magic might continue even in 2019.

That situation is fast changing in the run-up to the next Lok Sabha elections. After strings of by-election losses in the Hindi belt, especially the humiliating defeat in Uttar Pradesh’s Gorakhpur, Phulpur, Bihar’s Araria, Jehanabad and earlier in Rajasthan, NDA allies have become emboldened.

The NDA Allies have been deeply concerned about protecting their turfs in their respective states. They feel the time has come to reassess their options for choosing electoral partners for 2019. They can hear and understand the growing rumblings of resentment at the grassroots. They also realise the tide has begun to turn and barring the unlikely possibility of Modi pulling a rabbit out of his hat, his time of reckoning is fast approaching.

Paswan was not the only one after Naidu to have expressed concern over of the state of dismal affairs. The Shiv Sena has hit out publicly against Modi stating that by-election loss was a "defeat of ego and arrogance". The Sena’s mouthpiece Saamana said, “those who tread the path of lies are destined to lose. The BJP’s tally might go down to 110 in 2019”.

Modi’s arrogance is what the allies are speaking out against in private and in public. Even the allies who have declared to stand with BJP - Akali Dal and JD(U) - are disturbed over the treatment meted out to partners. Naidu has charged Modi with trying to play Jaganmohan Reddy’s YSR Congress against the TDP, like the BJP has done in Tamil Nadu.

For the allies, who can hear the rumblings on the ground, the time to desert the sinking ship of NDA has arrived.

#LJP, #Allies, #TDP exit, #BJP
The views and opinions expressed in this article are those of the authors and do not necessarily reflect the official policy or position of DailyO.in or the India Today Group. The writers are solely responsible for any claims arising out of the contents of this article.