Triple talaq bill is a step in the right direction, will save Muslim women

A section of the opposition thinks that this bill is a step towards the Uniform Civil Code, which is wrong.

Muslim women today are thankful to Prime Minister Narendra Modi. While the Bill banning the instant triple talaq case was being tabled in Parliament, the author was reminded of these prophetic words of the PM spoken in April 2017, “When we speak of social justice, our Muslim sisters too should get justice. We do not want to challenge the Islamic law but we are dead against the exploitation of our Muslim sisters.”

PM Modi’s intention was clear: that no Muslim woman must be deprived of the rights of equality and justice. In fact, umpteen women thronged the official residence of Ravi Shankar Prasad, the law minister to thank him for getting them out of the clutches of triple talaq.

The triple talaq issue has also highlighted the fact that Muslims in India do not require such bodies as AIMPLB. The likes of AIMPLB and Asaduddin Owaisi are forging the view that this anti-triple talaq bill interferes with the basic tenets of Islam. This is ludicrous because triple talaq is neither a religious issue nor a political matter; it is an issue of life and death for a wronged Muslim woman. What is sad is that a social issue has been treated as a religious one to stamp patriarchy in an unIslamic and illegal manner.

For those complaining about the three-year sentence, it must be known that despite the Supreme Court order banning triple talaq, there have been more than 70 cases where women have been at the receiving end. Punishment, therefore, is necessary. Moreover, it must be understood that Muslim men were punished for divorcing women by Hazrat Umar, Hazrat Ibn-e-Tymia and the Sahabas (followers of Prophet Muhammad).

Though considered sinful, the triple divorce is unfortunately legally enforceable in the Sunni Hanafi law. Since the vast majority of Muslims in India follow Sunni Hanafi law, many Muslim women become a victim of this form of divorce — and hence they are now taking the help of the apex court. The practice is not mentioned in the Quran and is blasphemous. To Prophet Muhammad, divorce was the most repugnant.

Travesty with the clerics is that they crumple otherwise the broad principles of Islam into myopic ones to make way for their political ends. They are responsible for bringing Islam into the ambit of mockery by the media and others. It is high time they follow Islam in its true spirit.

The AIMPLB believes it is its right to dictate terms and espouse views on issues that extend from the public domain of Indian Muslims to the privacy of their bedroom. Stoke a controversy involving the community and the usual suspects start emerging from the murky and infested woodwork of the AIMPLB. 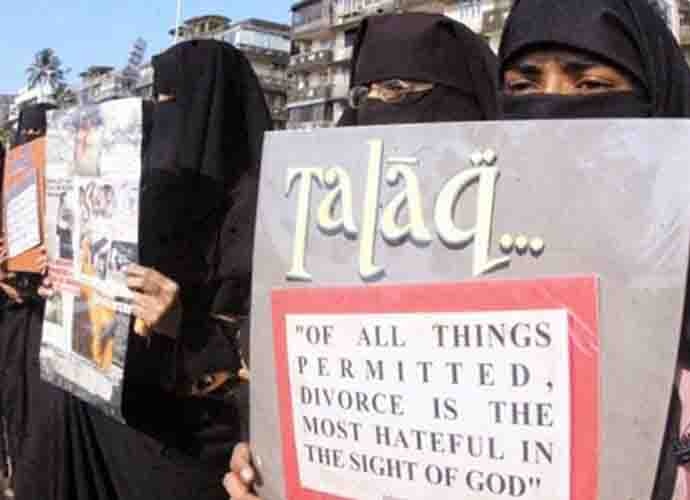 So the "wise men" constituting the board have once again jumped into the conclusion that the government is out to distort the personal shari’ah rights of Muslims as enshrined in the Constitution. In doing so, they have closed their eyes to the fact that over 92 per cent Muslim women are against the practice of instant triple talaq.

A section of the opposition thinks that this bill is a step towards the Uniform Civil Code, which is wrong. The UCC has nothing against Islam or shari’ah, rather its very first point coincides with what the Quran says: that both men and women must be given equal rights. It’s only the injustice to Muslim women meted out by their men that will be corrected by the UCC and that too in the spirit envisaged by Islam.

Indeed, the UCC, as per the Islamic order, will strengthen the right procedure of triple talaq from talaq-ebidat (triple talaq in one sitting) to talaqe-Husna (talaq in three months allowing a possibility of patch up).

Triple talaq and UCC are two separate issues. Personal laws cannot claim supremacy over the rights granted to individuals by the Constitution. All that AIMPLB has managed is tarnish the image of Indian Muslims. Triple talaq is a social vice among Muslims. The truth is that an average Muslim is not governed by what the AIMPLB says. The reality is that Muslims need no personal law boards. They would rather prefer that issues like education, unemployment, economic and social backwardness are addressed.

Most Hindus make up their mind about Muslims on the basis of the Muslim faces they see on TV and the voices they hear in the media. The people covered by the media are invariably those standing for status quo on triple talaq. These men — and women — seem to come from antediluvian times. If they are reminded of the reforms in talaq, polygamy or family planning in 22 countries like Pakistan, Iran or Indonesia, they dismiss them saying they don’t follow examples set by other countries!

One will witness a transformation in the Muslim community when it dedicates itself with greater vigour into realising Iqbal’s dream of a renaissance in Islamic culture. And the first step in that direction will be Indian Muslims sans any personal law boards.

Post your comment
#Narendra Modi, #BJP, #NDA, #Triple talaq bill
The views and opinions expressed in this article are those of the authors and do not necessarily reflect the official policy or position of DailyO.in or the India Today Group. The writers are solely responsible for any claims arising out of the contents of this article.