NEET is important for medical education, but give it some time

The present ordinance to postpone the test is a well thought-out strategy by the government.

Also read: Why Modi government is wrong to overturn SC order on NEET

India has the highest number of medical colleges of any place in the world. As of 2015, India has 381 medical colleges, which admit about 64,000 students every year for undergraduate (MBBS) & postgraduate courses (MD/MS). Of these, 188 medical colleges are private colleges catering to around 40,000 medical seats.

There are about 100 different entrance exams conducted by these various institutions, all having a different syllabus and exam patterns. 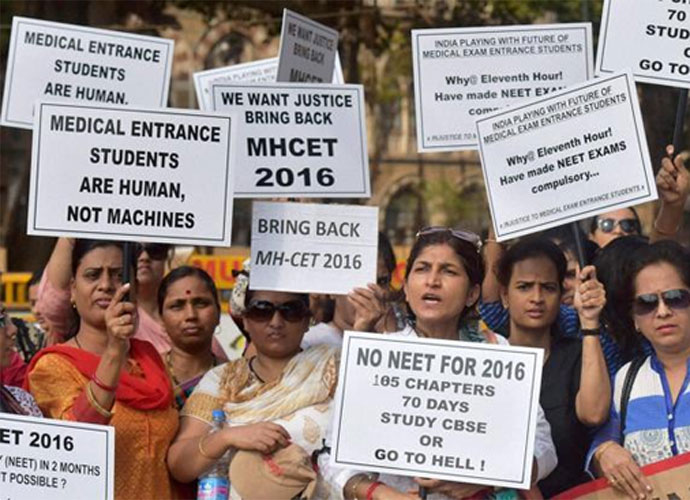 What makes NEET so controversial?

Initially, there were only a few private institutions located mostly in the states of Tamil Nadu and Karnataka, who charged a substantial amount of money as capitation fees, making it an option only for the wealthy elite. This business practice under the guise of "providing education" was soon discovered by corrupt operators to be an extremely profitable venture with little risk and absolutely no responsibility.

Multiple private medical colleges thus cropped up all over the country with the intent for quick profits, throwing basic standards of medical education to the wind. Despite the fact that many of them do not maintain appropriate standards as prescribed by the Medical Council of India, they continue to give medical degrees.

Many of these corrupt institutions have developed political clout by aligning themselves with political parties or even been elected themselves by misuse of their financial power. Thus, these "Education Mafias" remain protected, and this menace ruins the entire medical education system in the country.

Most private colleges have their own entrance exams for ostensible reasons. There is little transparency to these admission procedures, and the system is exploited to garner maximum income by illegally selling medical college seats to the highest bidder. Any effort to induce transparency to this would obviously hurt this downright fraudulent activity. The merit of the candidate is not the dominant criteria, but rather an ability to dole out lakhs of rupees. This should not be interpreted as an indictment of all private players as depraved cutthroats.

Many private colleges do exist that have maintained the highest standards and integrity as premier centers for providing medical education. CMC Vellore is one of them. The scenario with other private medical colleges, which are poster boys of corruption is different. Their very existence is based on questionable business principles.

Also read: Everything you need to know about SC recalling NEET order

It might be remembered that NEET would have already been in place in 2013 if the Supreme Court had not turned it back based on a petition by mostly private medical colleges whose interests would be harmed by such a transparent exam.

However, credit goes to the judiciary and the far-sighted judges. Despite opposition by strong financially vested interests, it has ordered a nationally viable transparent medical entrance exam for the country.

However, starting NEET immediately has some practical problems, more for the examinees than the examiners. It may be recounted that following the announcement from the Medical Council of India that it would introduce the NEET exam in 2012, several states including Andhra Pradesh, Karnataka, Gujarat, West Bengal and Tamil Nadu strongly opposed the change. The reason they indicated was that there was a huge variation in the syllabus proposed by the MCI and their existing state curricula. This contention of multiple state governments has merit and needs more thorough investigation.

It is impossible to expect thousands of examinees to prepare themselves for this examination with an extraneous syllabus by July 2016 when the second part of the exam is scheduled. This lack of a common playing ground would adversely effect many competitors required to compete with candidates used to the current syllabus. Thus, it would be unfair to those thousands of kids who need to orient themselves to this new syllabus in order to have a fair chance in the upcoming exam. Thus, delaying NEET for a year is a positive step to this end.

The argument in some sectors that it will also help private operators to continue their raking in of loot is equally bona fide and not an exaggeration. However, it must be understood that when accosted by two evils, it is a lesser evil than having to deprive thousands of young people a level playing ground to sit for medical entrance.

Though the ordinance is meant for state governments. Administration of the NEET examination within a month or two as scheduled would be potentially disastrous to thousands of competing young minds looking for a bright future. Thus, ample time needs to be provided to create a uniform competing platform before any such test is implemented.

The present ordinance to postpone the application of NEET is a well thought out strategy by the present government but unfortunately restricts it to only state government seats. It should be extended to all candidates to enable them to get acquainted with the syllabus. The fact that it will be misused by the "Education Mafia" as has been for decades is hardly questionable.

#Medical colleges, #Higher Education, #Medical Council of India, #NEET
The views and opinions expressed in this article are those of the authors and do not necessarily reflect the official policy or position of DailyO.in or the India Today Group. The writers are solely responsible for any claims arising out of the contents of this article.