Why Supreme Court making NEET results a reality is historic

The proactive nature of judicial activism from the apex court has worked.

Loud protests from various states with Tamil Nadu in the forefront led the Centre to shelve NEET for a year.

In February 2013, several minority and private institutions challenged the entrance exam, their petitions assisted by a couple of challenges from state governments. In the absence of any interim orders from the top court, in May 2013, NEET was held for the first time.

The SC challenge was then heard and in the much-talked about split verdict, dated July 18, 2013, late chief justice Altamas Kabir struck down the entrance test.

Its judgment was leaked prior to said date (which happened to be the day he retired). Following the taint, questions that did not add to the glory of the court were raised.

Based on the dissenting verdict of Justice Dave and assisted by the "surrounding circumstances", a review was mounted before the top court.

In May 2014, the CBSE reverted to conduct of AIPMT. According to an April 2016 order, the top court recalled the 2013 verdict of Altamas Kabir and upheld the conduct of NEET.

This order thus revived the Centre's notification of December 21, 2010 for the conduct of NEET at medical colleges all over India. 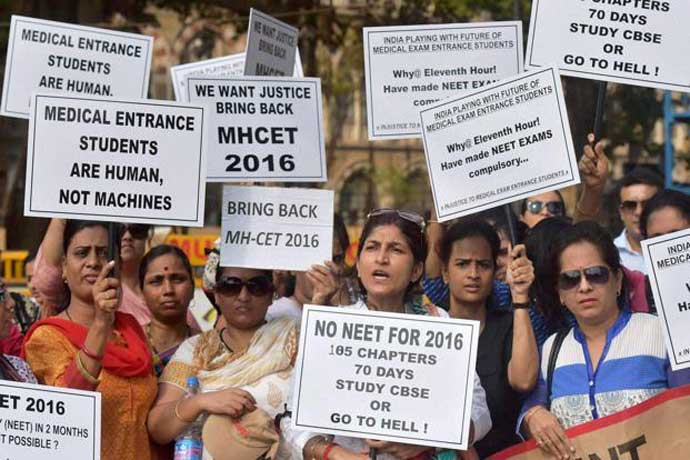 NEET was never allowed a safe and sure passage for political reasons. Photo: PTI

The Supreme Court upheld the validity of the introduction of NEET. It observed, cautiously, that any challenge or clarification must come before the Supreme Court and not be entertained by high courts.

We then had the spectacle of the government approaching the SC to seek clarifications and the right of candidates not appearing before being it afforded a further opportunity.

The SC declined to intervene and the CBSE conducted NEET on May 1, 2016. Then the central government came up with an ordinance on May 25, 2016, keeping the state government exams' outside the purview of NEET for 2016-17.

NEET was never allowed a safe and sure passage. Status quo seemed to have become a reality.

Tamil Nadu then stepped in and passed Tamil Nadu Admission to postgraduate Courses in Medicine and Dentistry Act, 2017, dispensing with the need for NEET in Tamil Nadu on February 2, 2017. The Act awaits presidential assent.

The central government did not budge and NEET happened on May 7, 2017 even amid the cacophony created by the political class that it was a conspiracy against the rural and underprivileged in Tamil Nadu, unmindful of the dilution in standard that they were clamouring for to gain political dividends.

It appeared as if the Supreme Court cannot be out of action at all. For the NEET exam was questioned as not founded on a standard evaluation and CBSE was committed to avoid declaring results by the Madurai bench of Madras High Court.

On June 12, the top court yet again intervened to dissolve the order.

In a rare instance of such an order - to seek transfer of challenges in Madurai, Chennai, Gujarat to Supreme Court - the apex court chose to direct CBSE to declare the results stayed by the Madurai bench. Such has been the proactive intent of the top court to ensure that NEET was a reality.

Academicians may be worried about judicial overreach and the proactive nature of judicial activism from the apex court.

But NEET is one instance. It appears to have been conceived, given birth, nurtured and now possibly rendered a reality thanks to the "interventionist" ways of the Supreme Court. But for such singularly-focused alacrity from the Supreme Court, NEET may have been derailed long ago.

Executive and legislature having abdicated its functions - it is left to the Supreme Court to resort to course correction despite herculean efforts to the contrary.

The Supreme Court is standing up for and on behalf of the student community which is making a case for fair play and merit in the field of medical education, strengthened by money power and influence peddling.

Equally, those that stand to lose if their hegemony is broken have not given up on their efforts. It is a huge blow to the precept and practice of the rule of law that a leaked judgment delivered by late chief justice, which almost derailed the entrance test, has itself been derailed and now the NEET train can leave the station on the date and time of choosing by CBSE for a safe journey into the future.

Kudos to the Supreme Court for its proactive role. Would there still be a twist in the tail?

Post your comment
#Supreme Court, #NEET
The views and opinions expressed in this article are those of the authors and do not necessarily reflect the official policy or position of DailyO.in or the India Today Group. The writers are solely responsible for any claims arising out of the contents of this article.