The question is whether the government can afford to allow few hundred thousand Indians to be killed in a war.

"It (China) is not afraid even of a nuclear war because as it is often said, they can afford to lose a few hundred million people and yet have enough numbers left." — Jawaharlal Nehru.

India-China relations are once again traversing turbulent waters. Both countries have serious disputes on the ground as also the deep waters of Indian Ocean; yet, both regional powers are trying to opt for diplomatic tools to pacify each other.

As the Nathu-la standoff persists, both nations are looking for references from the past to establish their positions.

Apart from discussions between the two countries, there is also a raging debate within India on the issue. The new found jingoism in our polity and society is also forcing a section of people to blame Jawaharlal Nehru, the first prime minister of India, for such disputes.

The general perception is that Nehru did not play the desired role in the India-China war of 1962. The defeat of 1962 still haunts our collective conscience and we do not want to accept any reasonable explanation for it.

But it's time to ask ourselves how Nehru, a world leader of his time, had faced the Indian people, including many of his fans, once the war of 1962 was over.

And what was the root cause, other than immediate strategic reasons for the Chinese aggression.

Were his public statements similar to those of the present political brass? Had the great debacle forced him to deviate from the policy of non-alignment? What was the fundamental difference between the policies of a democratic republic and a communist nation?

These questions were duly answered by the first Gandhian. Well before the war of 1962, Nehru wrote to the then chief ministers: "I do not like the idea of continuing tension and potential conflict between India and China. This is not because I am enamoured of China, but I am enamoured of India and of peace.

The burden of constant friction on a long border with a powerful country will be great and even worse than that burden will be the spirit of hostility that this arouse and which leads us to think in wrong direction."

Despite such apprehensions, Nehru understood the gravity of the situation, and so he wrote in the same letter: "In fact, however, that our attempts at friendship with the Chinese government have failed and there is unfortunately some actual and a great deal of potential conflict in the air. To say this is due to our policy of non alignment is to misunderstand the situation completely. Any other policy would not have prevented this happening but have accelerated it and made it more difficult for us to play the part we did in the furtherance of world peace."

It is true that now there are some visible changes in India's international policy, though its fundamentals are the same. 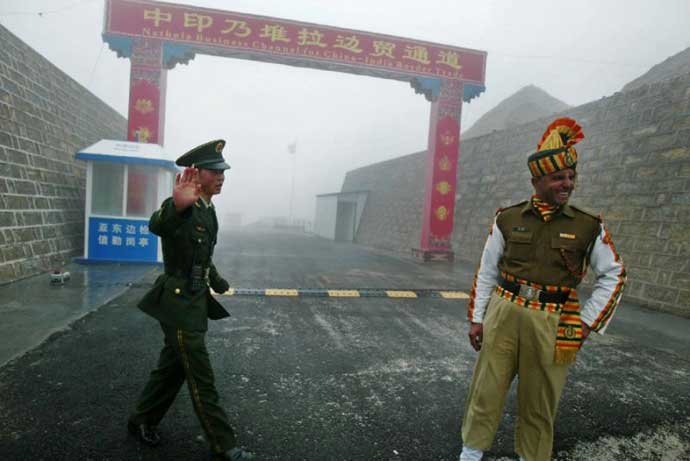 As the Nathu-la standoff persists, both nations are looking for references from the past to establish their positions. Photo: Reuters

After the war of December 22, 1962, Nehru once again wrote to the chief ministers: "A great deal has been said about the unpreparedness of our army. This may be partially true but the general impression created on this subject is, I think, not true."

He recognised the second cause as "a second major disadvantage to our army was the fact that our forces had been sent rather hurriedly from low altitudes near sea level to an altitude of about 14,000 feet".

After analysing the two strategic disadvantages, Nehru moved to the chief reason of the conflict and said, "It is easy to be wise after the event. It is easier to criticise what has happened."

In the same letter, Nehru clearly indicated the fundamental differences in the policy followed by the two neighbours: "It (China) is not afraid even of a nuclear war because as it is often said, they can afford to lose a few hundred million people and yet have enough numbers left."

55 years after the India-China war, Beijing's stance has not changed much but the question is whether we can change the principle Nehru chose to follow - and begin to believe that India can afford to allow few hundred thousand Indians to be killed in a war. Chinese Premier Zhou en-Lai (left) and Nehru during a diplomatic meeting in 1954.

After Independence, Nehru fully focused most of the national and international recourses on nation and institution building. The policy of non alignment provided India the opportunity to get help from both blocks. He said in the letter, "India was said to be the chief non aligned country in the world, and a country which constantly preached the virtues of peaceful co-existence. If India could be humiliated and defeated and perhaps even driven in to other camp of western powers, that would be the end of non alignment for the other countries also, and the Russia's policy would have been broken down."

He further said, "India had to be dealt with in furtherance of the wider policy and humiliated and forced either into joining the Western Block or into submitting to China. The submission does not mean physical domination but more of mental surrender."

At that time, Nehru concluded, "The internal difficulties in China have made it more rash and adventurist and extreme elements in the government there have taken control. They see that unless some such action (warfare) is taken and China's industrial progress will slow down. The only way, therefore, to prevent this is to create a situation in which the Soviet Union would be forced to come to China's help. In order to do this, India appeared to be the safest target for the present."

Now the situation is altogether different as our defence and finance minister Arun Jaitley recently stated. Both the countries are nuclear powers and have a large number weapons of mass destruction and great armies. While Narendra Modi's appeal cannot be compared to Nehru's great personality, the PM is trying hard to build his image as a world leader.

He has tested the popularity of the surgical strike on Pakistan and found considerable support for his tough stand against terrorism in Kashmir.

His recent visit to Israel may also hurt the business interests of China. India's aggressive relationship building campaign with other world super powers may also be a concern for the neighbour. This may well jeopardise the interests of China, which in turn may want to humiliate India.

Those mooting the option of any military conflict must read another speech by Nehru. On August 15, 1963, in his last speech from the Red Fort, Nehru once again preached to his country. He said, "Last year we suddenly felt a jolt when our borders were attacked... That forced us to do something we don't like to do. We had to spend a lot of money on military, perhaps double or more than double of the normal military spending. We need to recover that money through taxes. This lead to increase in taxes. No one likes the idea of increase in taxes, neither the person who is paying the tax nor the person who collects it...Do you know public have to face a lot of suffering during great wars. These wars ruin the countries. At this time we are not facing the war of that volume, but no one knows what will happen in future. So we have to prepare ourselves for any situation and to be ready to carry that load."

Every section of the society came to support Nehru during the war. Film stars visited army units, lyricists wrote songs of nationalism and vocalists recorded them with intense passion. But in today's India, even Bollywood is divided by the petty politics of our demagogues.

In his historic speech, Nehru reminded India that the external danger had one favourable outcome: It encouraged people to unite.

And the unity of India, the unity among the different sections of our society is the most important virtue. Now, in 2017, the country is once again divided on so many issues, from cow protection and love jihad to ghar wapsi and demonetisation to GST.

It seems the minorities, Dalits and liberals are deliberately being sidelined by divisive forces and the very idea of India as envisaged by Nehru is being attacked.

Do we really need a war to encourage our people to unite?

Post your comment
#Jawaharlal Nehru, #1962 Sino-India War, #India-China Ties
The views and opinions expressed in this article are those of the authors and do not necessarily reflect the official policy or position of DailyO.in or the India Today Group. The writers are solely responsible for any claims arising out of the contents of this article.