Were Nehru and Edwina too hot to handle for the Brits?

According to National Archive records, Lady Mountbatten, egged on by India's first PM, had given an earful to Oliver Lyttelton, the colonial secretary.

Thanks to a retweet by Shashi Tharoor, arguably the most articulate Nehruvian of our age, an enlightening piece has come to my notice.

In his fine rebuttal in the Hindustan Times, Abhishek Saha has done well to expose the recent malicious attempt through the tinkering of a Wikipedia entry to give currency to certain conspiracy theories with regard to Jawaharlal Nehru's ancestry and his link with Edwina Mountbatten.

The core idea around which Saha has pegged his story is that the onslaught on Nehru's good name "must be seen in the light of Hindutva political groups' perception that Nehruvian ideals are the 'biggest obstacle' to their own idea of India".

"All serious biographies of Nehru have referred to his relationship with Edwina Mountbatten and Padmaja Naidu. Most books have called the relationships platonic, but even if such relationships were not platonic, then what? They were consenting adults. Was he cheating on his long-dead wife? No. Did it affect governance? No."

In view of Government of India's fantastic record in maintaining and declassifying documents, we have been deprived of official light vis-a-vis platonic relationships of our former prime minister. But by the grace of Her Majesty's Government, a small snippet is now in public domain on the innocuous Edwina-Nehru link.

File no PREM 11/340 is available to the researchers at the National Archives at Kew in London after 50 years of closure. Going through it and the other records - including an MI6 report showing that an Indian diplomat close to Nehru suspected that British influence came in the way of the Indian statesman getting a Nobel Peace Prize - I am convinced that there must be more relevant material available at the archive. And with the British government, but still classified. 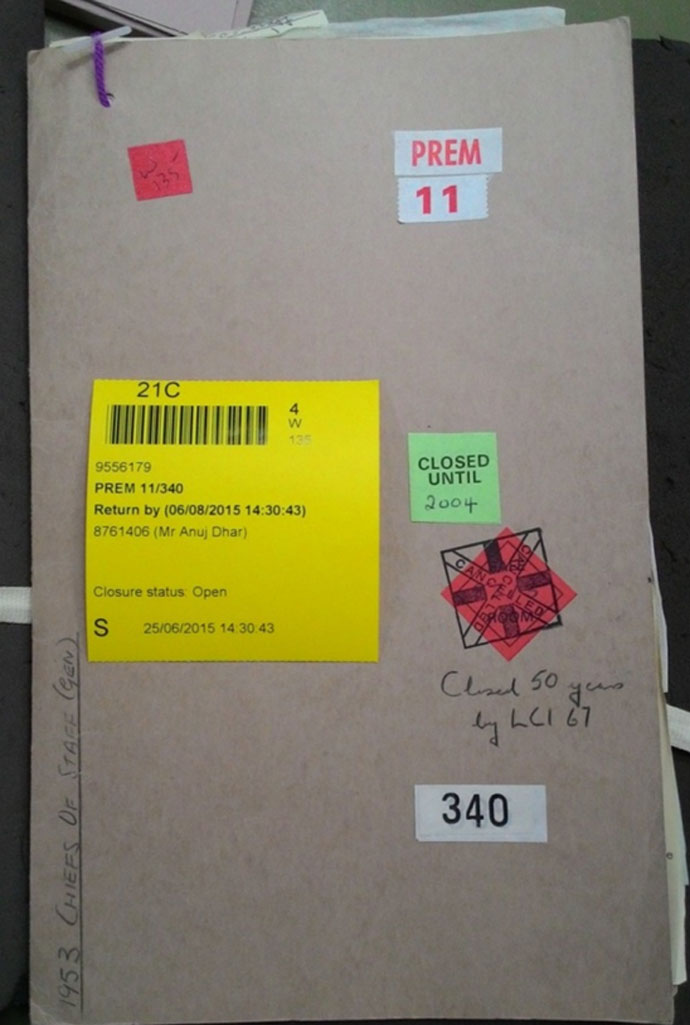 All the same, in the file one would find the following gem in which the private secretary of Queen Elizabeth is seen informing prime minister Winston Churchill that, ahem, "time has come when it should be pointed out to Edwina by one of Her Majesty's ministers that these visits of hers to the Indian capital do not further the general interests of the Commonwealth". 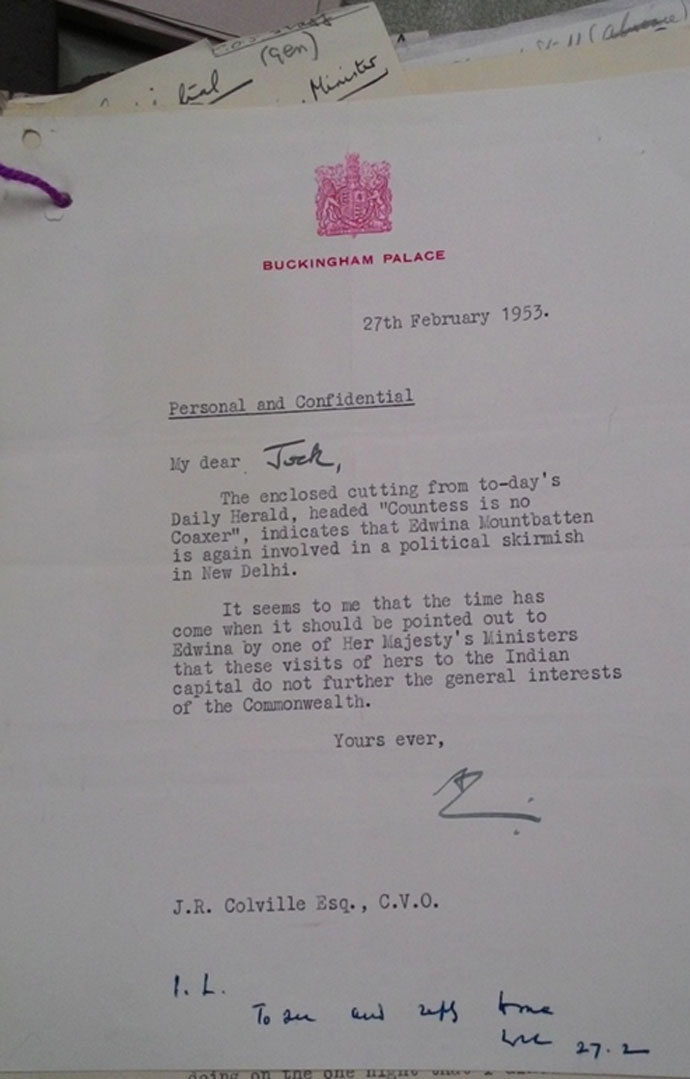 Pay attention to the British wit, gentlemen! "... Edwina Mountbatten is again involved in a political skirmish in New Delhi".

There was a certain backdrop to the Palace taking a note of this skirmish. At a ceremonial Palace party before Elizabeth's coronation in 1953, Edwina had turned up with Nehru, not her hubby - the handsome Lord Louis Mountbatten about whom it used to be said that he could charm a vulture off a corpse.

But then, it was not for nothing that long before most Hindutva fighters of the internet age were born even that the Playboy had deemed it fit to carry an interview of Chacha Nehru in October, 1963. Going back to another page in the National Archive file, egged on by Nehru by her side, Edwina is seen giving a tongue-lashing to Oliver Lyttelton, the colonial secretary, over some instance of atrocity in Kenya. Behold, for here is the proof of an unsung triumph of Indian diplomacy: 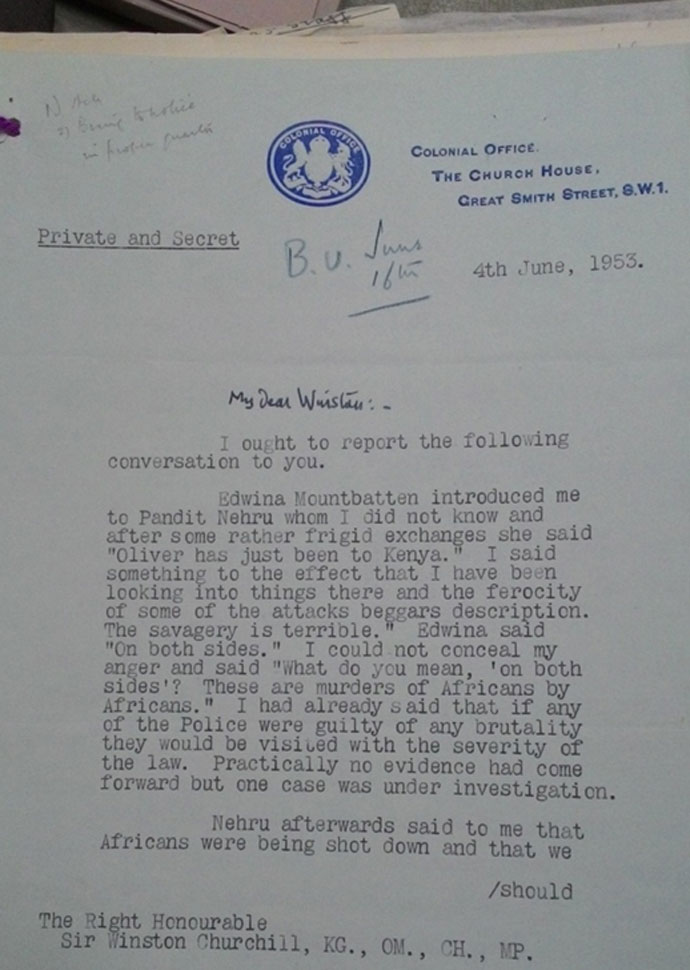 In his private and secret letter to prime minister Churchill, Lyttelton complained that during the ambush, Nehru was "barely civil" and Edwina's remarks were "disgraceful".

The last available record in the file shows that Churchill had decided to take up the matter with the Mountbattens in due course. 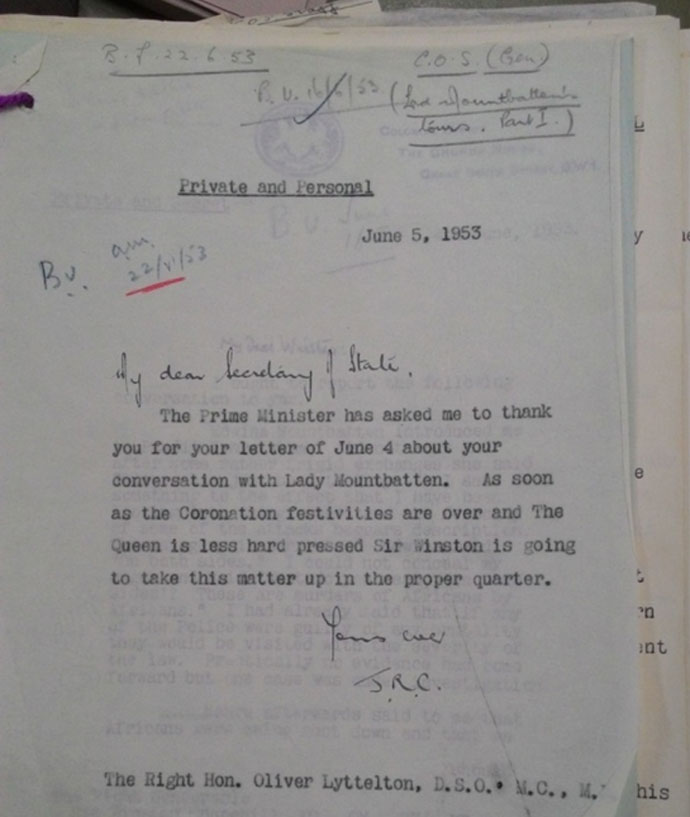 Post your comment
#Edwina Mountbatten, #Lord Mountbatten, #Jawaharlal Nehru
The views and opinions expressed in this article are those of the authors and do not necessarily reflect the official policy or position of DailyO.in or the India Today Group. The writers are solely responsible for any claims arising out of the contents of this article.