How Nepal moved from absolute monarchy to democratic republic

With KP Sharma Oli as Prime Minister, Nepal has got its first ever democratically elected government. The country's journey from absolute monarchy to multi-party democracy is a story of innumerable sacrifices and many revolts that were seldom peaceful. The decade-long Maoist movement alone claimed the lives of 17,000 people. Ten years ago, when the curtains finally fell on Nepal's 250-year-old monarchy, it was undoubtedly the country's gigantic stride into a more just system of governance that promised to end discriminations based on caste, creed and social standing.

While Oli takes over the charge of the Left Alliance government, it will be interesting for Indian readers to have a flashback into Nepal's topsy-turvy journey to being a republic. Like the Rome of the old saying, Nepal too did not become a republic in a day but is a result of a long-drawn struggle of its people. Since the 1950s, there was hardly a decade without one big anti-monarchy movement.

While the whole world was celebrating Valentine's Day, Nepal woke up to the news of an armed uprising in its remote parts on February 14, 1996. On February 13 that year, the Communist Party of Nepal (Maoist) declared a war on the government of Nepal with the aim of establishing a Communist rule. Initially, it was seen as an "adventure" of a handful of people who were still dreaming of bygone revolutionary eras of Lenin and Mao. For Nepal's ruling elite news of such a rebellion wasn't new. There had been many rebellions before it. Some of them were crushed cruelly under the heavy boots of the armed forces and some were co-opted into the system.

Then ruling party, Nepali Congress, had led the armed rebellion against the state in 1950s and the main Opposition party, Communist Party of Nepal (United Marxist Leninist), had come out of a Naxal-like armed uprising in Jhapa in 1970s. These rebellions did not bring down the monarchy but successfully negotiated their place in the system. Hence, when the Maoists declared the People's War, the government reacted with a snub. The government described it as a law and order problem and pledged to act accordingly. 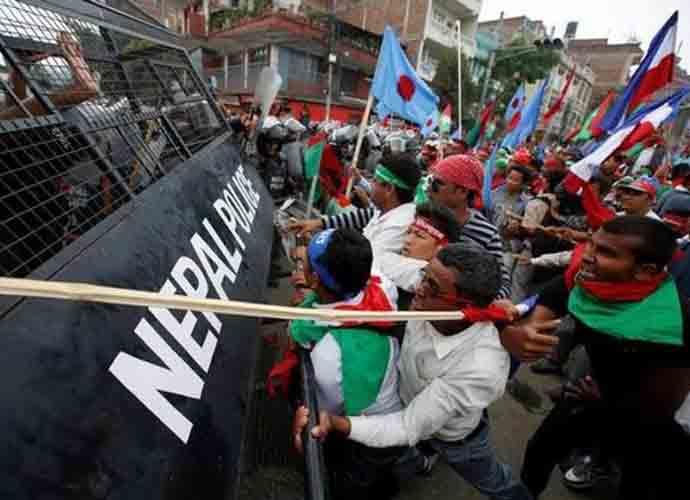 The Left leaders too distanced themselves from the Maoists' People's War. Narayan Kaji Shrestha "Prakash", who is now the deputy leader of the Maoist Centre, called it an "ultra Left deviation". Senior communist leader Mohan Bikram Singh, who was known as Nepal's Mao, too described it as an "ultra Left act", which would only help "reactionary forces".

Also, very few people, a small circle of the Maoist Party's top brass, had heard of Prachanda. His catapulting to the top of the party too was accidental. He became the party's general secretary when he was just 35 and unlike other senior leaders he had not yet written very convincing treaties on revolution. Even inside his party, very few believed in his leadership skills.

But once the movement began, it didn't look back. Day after day it not only swelled as masses in remote parts of Nepal joined in. Within 10 years of its initiation, the Communist Party of Nepal (Maoist) and its People's Liberation Army had control over the 80 per cent of the country's territory.

Regicide and the psychological end of the monarchy

June 1, 2001, is arguably the most important turning point in the history of Nepal. That day, crown prince Dipendra Bir Bikram Shah, in a fit of mindless rage, killed his father King Birendra Bir Bikram Shah and other members of the royal family, save his cousin Paras and few lesser royals. Uncle Gyanendra Bir Bikram Shah Dev was not in the Narayanhiti Palace so he survived the massacre.

The massacre hastened the end of the monarchy in the country. There are many theories on the massacre, including a love story, but sadly no official narrative can be referred to as believable. The killing led to people to break with the 250-year-old royalty emotionally. The massacre was so dramatic and surreal that it forced the staunchest supporters of the monarchy to discard it openly. Nepal's hugely circulated newspaper Kantipur published an article by then underground Maoist leader Baburam Bhattarai calling people to overthrow the "illegitimate" monarchy. Editor Yubraj Ghimire, managing director Kailash Sirohiya and director Binod Raj Gyawali were arrested on charges of sedition for publishing the article. The massacre freed the people from psychological confusion. They hated monarchy but loved King Birendra. He was seen as a symbol of Nepal. Even the Maoists, who enjoyed mass support in the rural areas, were trying to forge a secret alliance with the King against the 'corrupt' politicians and ever-interfering India. However, with the killing of the king, ending the monarchy became their top agenda.Royal coup d'état

In February 2005, King Gyanendra declared a state of emergency and disposed the Sher Bahadur government. He blamed the government for failing to bring peace and promised to do so within three years. He had sacked the Deuba government previously too in 2002 but restored him in 2004 after his appointed prime ministers failed to bring result. But this was too late, too little.

Meanwhile, the Maoists had opened dialogue with parliamentary parties as well as India and had successfully traded their People's War with the end of monarchy. King Gyanendra's sacking and restoring prime ministers had already alienated him from the major political parties, which otherwise, were handy in dealing with the Maoists and negotiating deals with India.

By November 2005, the Maoists and the alliance of seven parliamentary parties had held several rounds of negotiation and reached the 12-point agreement. According to the agreement, both sides committed themselves to jointly fight the monarchy. The Maoists also agreed to end the armed struggle and put their Army under UN supervision.

In April 2006, the Seven Party Alliance began pro-democracy demonstrations in Kathmandu and other parts of Nepal. To support the demonstrations, the Maoists declared a three-month unilateral ceasefire and its supporters swelled the streets of Kathmandu. There was no turning back from here and the rest of the story is just the dates.