Why 1955 Japanese report about Netaji's death is bogus

The pro-Congress faction in the Bose family, of which Ashis Ray is a prominent part, is trying to project the report as the ultimate truth.

My previous article exposed a misleading claim made by Ashis Ray that he was releasing for the first time – the "world exclusive" as he branded it – a 1955 Japanese report about Subhas Chandra Bose's death.

The present article is about the Japanese report, which has received considerable media attention thanks to Ray’s credentials as Netaji’s grandnephew and his excellent connections as a former top journalist. Many ran it as if the Japanese report was a gold standard of proof in establishing Netaji's death.

Ray and his aunt, a former Congress party MP, resorted to histrionics on a channel which appears to support a particular line on the controversy surrounding Netaji's fate.

For a start, it is vital to understand the circumstances in which the Japanese put together this report in late 1955 and handed it over to Indians.

One must always keep in mind that right from the start, the attitude of the government of free India towards the Netaji mystery matter was hostile. All the public inquires into Bose’s fate did not come about due to the free will of those in power - but because of public pressure.

The first prime minister of India was not even open to the idea. As a declassified file reveals, on August 6, 1952, legislators in the West Bengal Assembly exploded with rage while discussing a resolution seeking an inquiry. Former revolutionary Dr Atindra Nath Bose called the demand "a very faint echo of the national desire which is surging in the heart of Bengal."

Atindra Nath fulminated that the only people who believed in Bose’s death were "his erstwhile colleagues who cannot hear his name." Then he launched into a furious diatribe against New Delhi: "Is there any free government in any part of this world which can get rid of their national hero in such a disgraceful, in such an unsympathetic and unseemly fashion? Could you imagine a more wretched instance of such jealousy, meanness and ingratitude?"

The Assembly resolution requesting the government of India to "take all necessary steps for ascertaining the real efforts about the alleged death" of Bose was eventually dismissed by the prime minister: 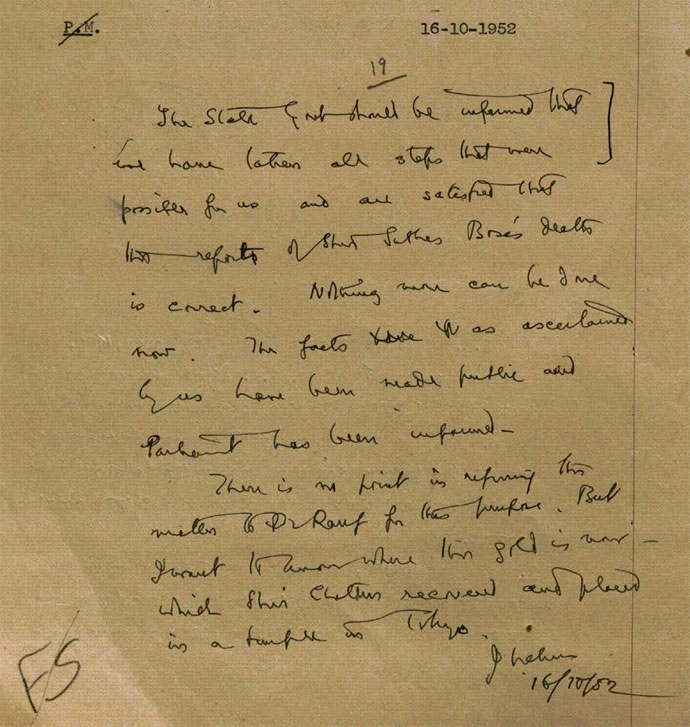 "The state government should be informed that we have taken all steps that was possible for us and we are satisfied that the reports of Shri Subhas Bose’s death is correct. Nothing more can be done. The facts ascertained have been made public and Parliament has been informed..."

The only "inquiry" that the independent Indian government had carried out by this time was through a dubious character, a former Bose aide turned Jawaharlal Nehru loyalist, accused in the declassified files of having a hand in the loot of the INA treasure.

Perhaps by coincidence, Bose’s fate became a hot topic, both in Japan and India in 1955. A decision by the priest of the Renkoji temple, where Bose's presumptive ashes were enshrined, to hold a memorial service as per a Japanese custom and the Japanese government’s September 17 offer to send the ashes to India sparked off a controversy.

Local Indians demanded a full-fledged investigation into the death as well as the missing INA treasure. "Alive or murdered? Indians seek truth about Chandra Bose" screamed a Nippon Times headline on September 18, 1955. 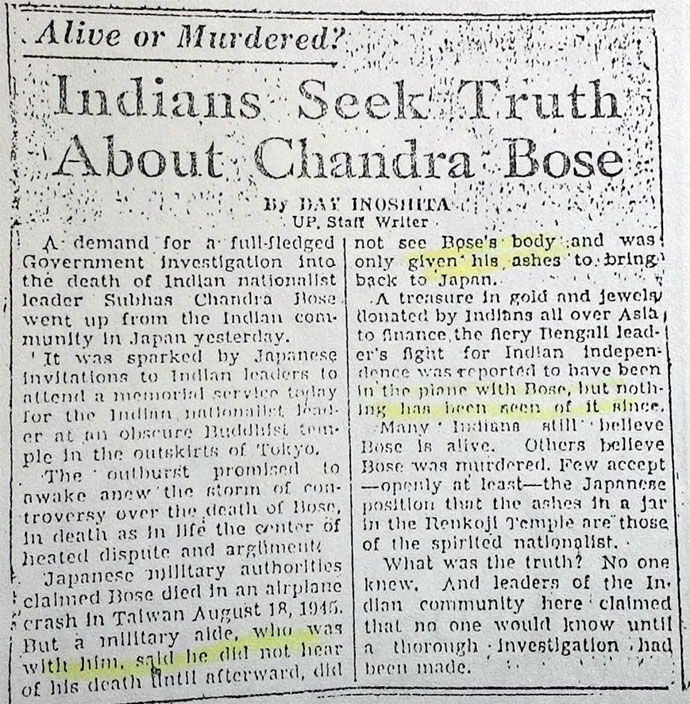 "A treasure in gold and jewels donated by Indians all over Asia to finance the fiery Bengali leader’s fight for Indian independence was reported to have been in the plane with Bose, but nothing has been seen of it since," read the story.

It was to counter this conspiracy theory about Bose’s "murder" that the Japanese were compelled to jettison their original claim that Netaji had died while he was on his way to Tokyo to hold consultations about the modalities of surrender in the wake of the end of the Second World War.

News agency Domei (now Kyodo) that had first circulated the official version of Bose's death now organised an extraordinary press conference where it paraded three former army officers who vouched for Bose’s death and explained what had happened to the INA treasure.

For the first time since the end of the war, the Japanese publicly owned up what the British intelligence had figured out in 1945. The Nippon Times reported:

"According to the former army men quoted by Kyodo, Bose was being transported from Singapore to Russia to escape prosecution by the Allies. A Lt Gen Shidei, a Russian expert who was being transferred to the Manchurian theatre, was to see that Bose got to the Soviets."

Totally oblivious to the revelation about Russia, the Indian embassy in Tokyo saw the Japanese government's hand behind the blitz. New Delhi was informed on September 20 that "the Gaimusho [Japanese foreign ministry] are interested in having the ashes sent to India in order to close the still lurking suspicion in their mind that the Indians somehow hold the Imperial Japanese Government responsible for some negligence in not safeguarding the life of Netaji and the property of the INA which he was carrying."

Simultaneously, the Nehru government was coming under increasing pressure to form an inquiry. A showdown took place in Kolkata on September 6, 1955 during a meeting of Netaji memorial committee, attended by the Red Fort trial hero Shah Nawaz Khan.

Now a Congress leader, Shah Nawaz himself inadvertently triggered a backlash against the government by telling the gathering that the prime minister was not ready for any official probe. It resulted in the adoption of a resolution envisioning a public-funded inquiry into the mystery.

If it had come into being, this civil society-led unofficial committee would have had Justice Radha Binod Pal, the only Asian judge at the Tokyo war crimes trials, as its head.

The judge already had some idea about the Bose death issue. He had been dramatically informed by a fellow American judge that the Taipei crash was "possibly a myth".

Pal discussed it publicly more than once. Writing to Japan-based freedom fighter AM Nair in 1953, he had rooted for a proper inquiry: "The whole thing demands a thorough investigation. Statements by individuals made here and there will not convince me as to the truth of the story given out. I have reasons to doubt its correctness."

In pursuance of the Kolkata resolution, Shah Nawaz Khan met prime minister Nehru. Thereafter he was never seen again by the side of those who doubted the crash theory. Gone was the man who had himself believed, as government papers show, that his former leader never perished in any air crash.

The following excerpt is from a declassified 1948 intelligence report, released by West Bengal government in 2015 due to the efforts mounted by the writer and his friends: The Nehru government suddenly woke up to Shah Nawaz’s eminence. There was a shift in the official position, which as late as September 29, 1955 remained stridently opposed to a proper probe.

On October 13, 1955, Nehru minuted that he had decided to set up a team of three people to inquire into the matter. It was to be headed by Shah Nawaz Khan, whose career graph was now going to go up.

The PM defined the task before the official inquiry panel in the following words:

"The purpose of the inquiry will be to find the circumstances of the death and how far the ashes kept in a temple in Tokyo are Shri Subhas Bose’s ashes."

Thereafter, the Indian embassy in Tokyo took up the issue with the Japanese foreign ministry. The director of Asian Affairs Division at the Gaimusho told AK Dar, the point man in Indian embassy, that the Indian government's proposal to inquire into Bose’s death was "acceptable to the Government of Japan in the terms in which the proposal was made by the Indian Ambassador to the Foreign Minister [of Japan]" at the specific instruction of prime minister Nehru. Dar’s subsequent note for New Delhi threw further light on "the terms" and their implied meaning:

To ensure that there was "no departure from the main objective in view", the terms of reference for the inquiry committee came preloaded with the assumption that Bose had died following an air crash.

It was in these circumstances that the Japanese handed over to Indian embassy a dossier, a part of which was the report Ray has now circulated. The main report runs into six loosely typed pages, of which four deal with Bose's death, and the rest try to account for the missing INA treasure.

These four pages merely outlined the results of an investigation into Bose's death. They provide an itinerary of Bose's last known days, names a few officials who were with Bose in those days and briefly refer to their claim about his death. Appended to this six-page report are four sketches showing the sitting arrangement in the plane which had carried Netaji and others, and sketches of the hospital ward and room where he died. 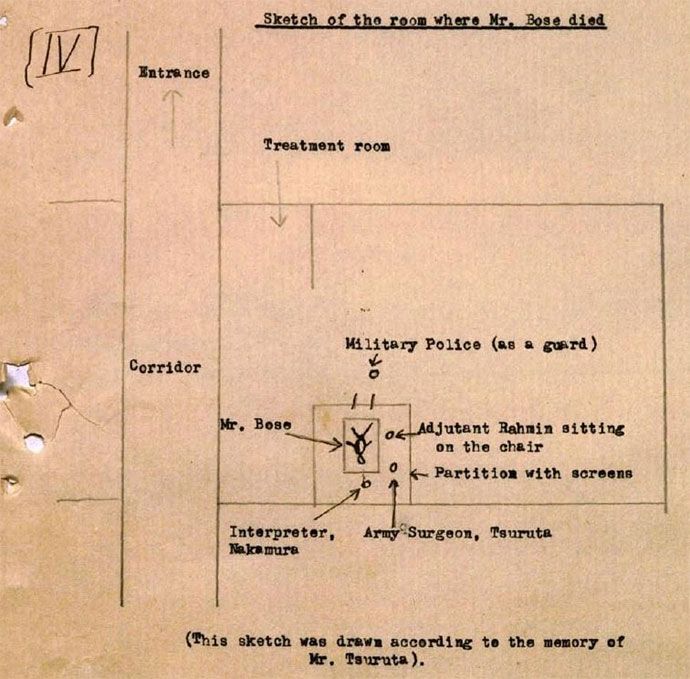 It goes without saying that in matters of such importance brevity is generally not appreciated. People want to know all relevant details in order to get to the bottom of barrel to remove all suspicions and doubts.

But the sheer size of the Japanese report is indicative of it being an eyewash. At that, whatever details it offers highlight more lacunas in the eyewitness account - first noted by the British India intelligence sleuths, who spotted inconstancies and contradictions in the versions of Habibur Raham, the main eyewitness, and the Japanese.

Take for example the following portion from the Japanese report describing how Bose’s plane crash landed barely after taking off.

Set against this is the version given by main witness Habibur Rahman, who appeared before the Shah Nawaz Committee in 1956. This too comes from files declassified by the Narendra Modi government:

While the Japanese report and the sketch in it claim that the plane crashed near the runway, Rahman puts it one or two miles outside the aerodrome. There is no way to reconcile such conflicting accounts. And there were many of them.

The Japanese report states that Bose was wearing a thick sweater, which was permeated with gasoline, and this led to his entire body being engulfed in fire.

Rahman, who saw this unfold in front of his eyes, asserted that unlike him, Bose was not wearing any sweater, and that’s why he (Rahman) escaped serious burns but Bose couldn’t.

It goes without the saying that if the Japanese report had established the fact about Netaji's death without a shadow of doubt, the government of India would have gone all over the town with this clincher of evidence soon after it was received from the Japanese side.

The entire story of Netaji's death was based on eyewitness accounts. And since these accounts were marred with holes and contradictions, they did not add up. All that the Japanese report does is to add to suspicions.

Therefore, it cannot be the gold standard of proof of Netaji's death as the pro-Congress faction in the Bose family, of which Ashis Ray is a prominent part, has projected.

Also read: How a Congress supporter's site is spreading lies about Netaji's death