Netaji files: Did Nehru hide the fact that Subhas Bose was in Russia?

A recently declassified file has yielded the sensational claim that Netaji was alive even after his reported death in 1945.

One of the files declassified by the central government on June 29 has yielded a sensational claim that Netaji Subhas Chandra Bose, reported dead in 1945, was in Soviet Russia as late as 1968.

According to this claim, rather allegation, Bose was compelled to seek asylum in Soviet Russia over charges of war crimes and the machinations of Jawaharlal Nehru and Krishna Menon.

The claim was made in 2000 through a duly sworn affidavit filed before Justice Mukherjee Commission of inquiry, which deemed its contents fit to be raised with the central government. 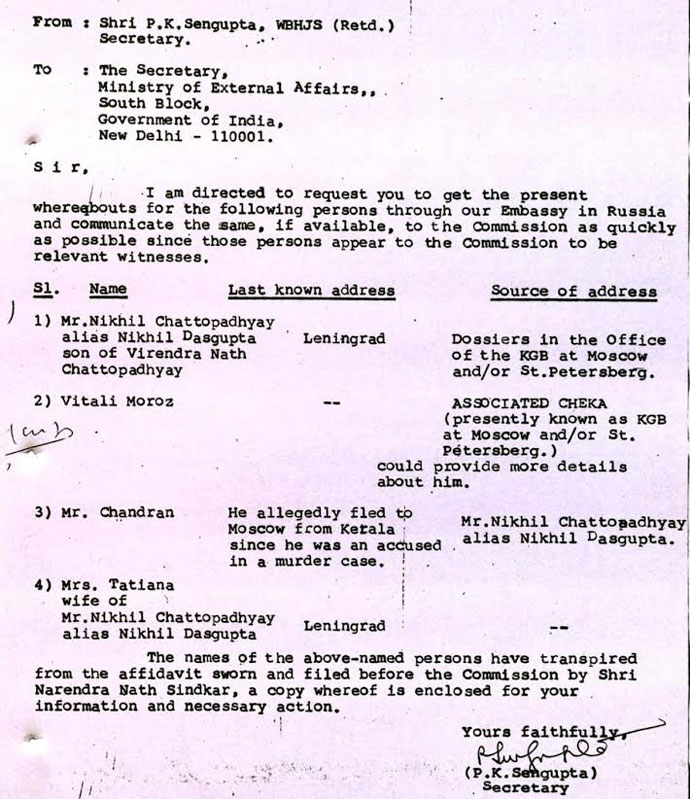 Narendranath Sindkar, a retired journalist living in Pune, affirmed in his affidavit filed with the Mukherjee Commission that he had worked as an announcer for "Radio Moscow" from 1966 to 1991. During this period, Sindkar came in touch with several Indian Communist leaders. While most were considered by him as "informers" of the Soviets, one stood out.

For years Virendranath's fate was unknown. Now we know that he was arrested on July 15, 1937 during the Great Purge. His name appears on a death list signed on August 31, 1937 by Joseph Stalin.

Virendranath was married more than once. Nikhil Chattopadhyaya’s mother, in view of details furnished by Sindkar, could be Russian.

Also read: How Netaji's kin are fuelling mystery around his disappearance

According to Sindkar, "Nikhil Chattopadhyaya however became a trusted comrade of the Soviet Communists. He did not frequently mix with the CPI leaders in Moscow perhaps due to their internal feuds, but wielded very good influence in the higher echelons of the Soviet and Indian Communist leaders."

According to Sindkar, Nikhil "worked as an interpreter for Netaji" when he was on his way to Berlin in 1941 following his escape from India. "One Vitali Moroz also accompanied him, when Subhas Chandra met Herr Von Schulenburg, the German Ambassador in Moscow."

It was during one of this private talks with "Nikhilda" that the issue of Bose cropped up.

"He [Nikhil] accused Nehru of forcing Netaji Subhas Chandra to exile in Soviet Russia. It was an exile because Netaji feared that he would be declared a war criminal with the connivance of Nehru," wrote Sindkar in his affidavit.

He added that after Bose’s arrival in Russia via Manchuria, the Soviet leadership consulted "Krishna Menon in London through the Soviet Embassy".

What this writer can add to the above is that in September 1946, when Nehru was the interim prime minister, Krishna Menon’s meeting with Soviet foreign minister Vyacheslav Molotov over some "highly secretive matters which could not and would not be disclosed" had raised eyebrows.

Was the Netaji matter discussed as well? "Krishna Menon categorically asserted in favour of Nehru and urged Stalin not to divulge the information since Nehru was about to become prime minister and who would follow a strict pro-Soviet policy," Sindkar continued.

Towards the end of his affidavit, Sindkar referred to Nikhil Chattopadhyaya’s meeting Bose in 1968 in Omsk, southwestern Siberia, where according to one report Bose's Azad Hind government had stationed a representative during the war. Now, assuming Sindkar’s account is credible, how will it square with the three prevalent theories about Netaji’s fate?

The plane crash theory would be defeated, and so will be the conspiracy theory that Stalin ended Bose’s life at Nehru’s behest. Stalin died in 1953.

This leaves only the so-called Gumnami Baba theory for us to consider. To cut the long story short, it is not for nothing that Allahabad High Court wanted an inquiry to fix the mostly unseen Baba’s identity. The Akhilesh Yadav government since then has set up a commission of inquiry, which would be led by Justice Vishnu Sahai.

Sindkar’s account is in some ways similar to what Gumnami Baba told those who knew him - that he was granted asylum by Russians, that Stalin did not behave like an enemy towards him; and that he had been declared a war criminal with the connivance of the leadership of free India.

He also claimed that after he secretly returned to India, he would all the more secretly slip out and visit Soviet Union, which continued to maintain a contact with him.

Evidence for and against such claims is unlikely to emerge unless India releases all relevant material from her intelligence archives and then requests the Russians to do the same.

Sindkar’s account also lends some credence to the now proven charge that the free India government was wary of "dead" Bose’s return. This would explain the long-drawn snooping launched on all those who had the misfortune of being linked to Subhas Bose in one way or the other.