How government hid US intelligence's concerns about Netaji's death

A newly declassified file says America at the end of World War II believed there was no 'direct evidence' of Bose's death in an air crash.

A ministry of external affairs file created in 1978 which has now been declassified tells us that US government at the end of Second World War believed that there was no "direct evidence" of Subhas Bose’s death in an air crash.

The revelation is particularly significant because inquiries into Bose’s reported death in Taiwan on August 18, 1945 were first undertaken by the US military in Southeast Asia, then under the command of General Douglas MacArthur.

The revelation is equally shocking because the file was not shared by the government with the Mukherjee Commission.

Also read: What Bose family doesn't want you to know about Netaji mystery

The information in the file was collected in 1978, when Janata Party was in power, by the Indian Embassy in Washington, DC from the US state department. It followed a parliamentary query by late Prof Samar Guha, known for raising issues related to Netaji.

In July 1978, S Sundaram, second secretary at the Embassy, forwarded relevant documents to ministry of external affairs in New Delhi with the comment that "these papers do not in any way establish the accuracy of the reports of Netaji’s death". Documents accessed by the Embassy from the state department showed that the American assessment itself had been made following a request by the British intelligence.

In May 1946, several months after Bose's reported death, Lt Colonel Hannessy, head of military intelligence in Bombay, met US consul N Donovan there. Hannessy told Donovan that "the hold which Bose had over the Indian imagination was tremendous, and that if he should return to this country, trouble would result which... would be extremely difficult to quell".

Donovan then wrote to the state department:

"Hannessy asked me if I could ascertain whether American intelligence reports substantiated the fact that Bose actually died following the air crash." 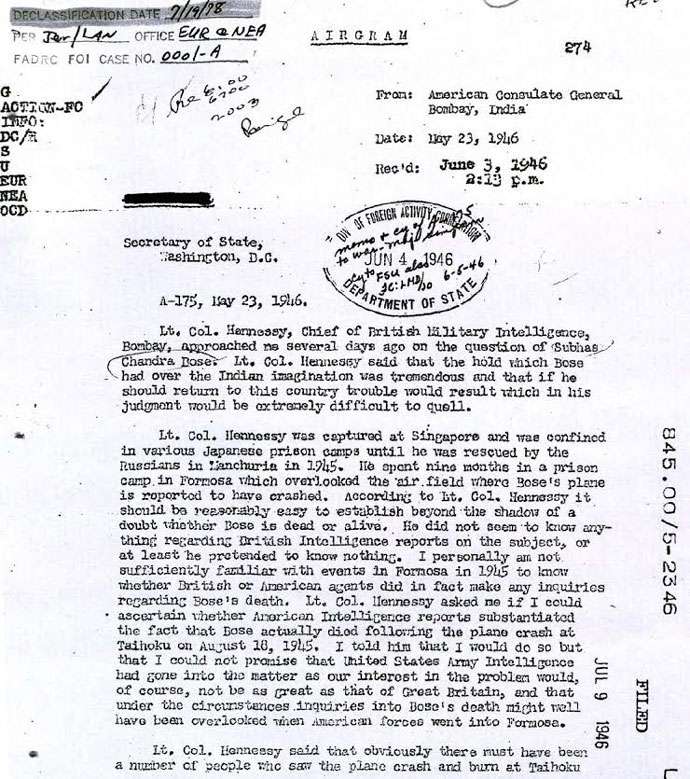 The state department in turn checked facts with the war department, now department of defence, at the Pentagon.

On July 3, 1946, the war department informed state department that "a search of our files in the intelligence division reveals that there is no direct evidence that Subhas Chandra Bose was killed in an airplane crash at Taihoko [sic], Formosa, despite the public statements of the Japanese to that effect. Nor is there any evidence available to the intelligence division which would indicate that the subject is still alive." 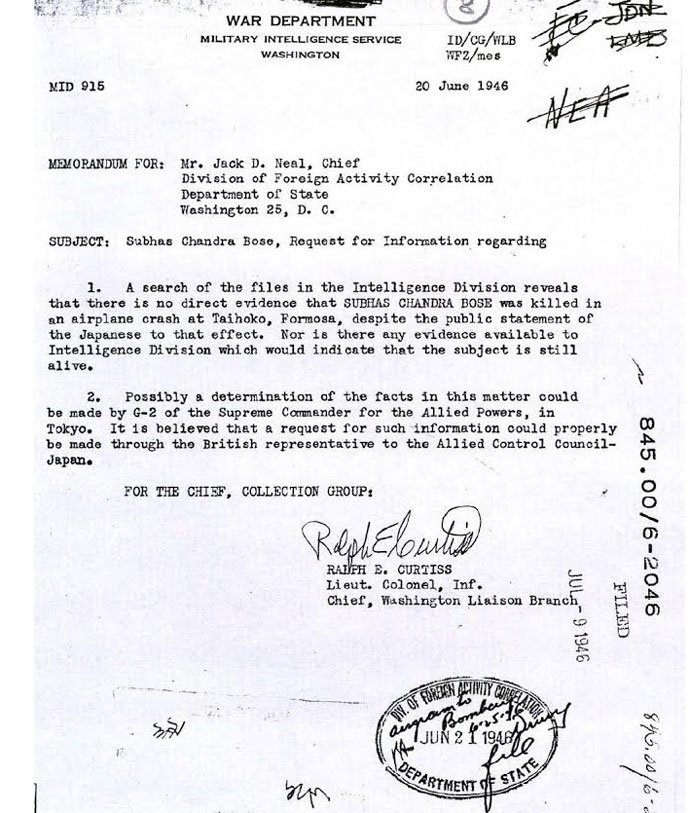 War department’s communication was then relayed by the state department to Mumbai, for onward transmission to the British intelligence. The British were advised to check facts with General Douglas MacArthur’s intelligence agency G-2, which was in control of the situation in Southeast Asia.

Disturbingly, this particular MEA file was not placed before the Mukherjee Commission (which probed Bose’s death from 1999 to 2005). Why? To conceal facts.

Also read: Why the declassification of Netaji files is a sad, cruel joke

This act of concealment was carried out to give the lie to a statement made in Parliament on August 28, 1978 by then Prime Minister Morarji Desai that findings of previous enquiries set up under Congress rule were not "decisive" as some "contemporary records" to contrary had become available to the government of India.

After he took over as chairman of the inquiry, former Supreme Court justice MK Mukherjee repeatedly asked the government to send him the "contemporary records" Desai had referred to. But the authorities wouldn’t do that. They made excuses that were not acceptable to the judge.

So Justice Mukherjee wrote in his report that the commission found "it extremely difficult to persuade itself to believe that a Prime Minister of the country would make an incorrect statement on the floor of the Parliament to invite the risk of breach of privilege".

In hindsight, the judge was right. And so was his observation:

"The stand taken by the Ministries/offices concerned of the Government of India that there are no contemporary official documentary records with them on the basis of which the late Prime Minister Shri Morarji Desai had made the above statement…put a spoke in the wheel of this inquiry".

#Netaji Subhas Chandra Bose, #Netaji Files
The views and opinions expressed in this article are those of the authors and do not necessarily reflect the official policy or position of DailyO.in or the India Today Group. The writers are solely responsible for any claims arising out of the contents of this article.