An abandoned memorial. Is that all India can offer Netaji?

Delhi has places for babus and netas to meet over drinks, but nothing for the man instrumental in bringing freedom to the country!

It is as clear as daylight that the Indian government does not want its citizens to keep any good memories of Netaji Subhas Chandra Bose and his efforts to free us from the yoke of colonialism. Netaji and the Indian National Army's (INA) efforts to liberate India get only limited space and ink in school textbooks. Even after seven decades of his sibylline disappearance, nobody knows as to what really happened to him. Even today, the mystery amounts to a lot of speculation and unofficial theories about Netaji's death in Taihoku, and an incredible afterlife in Russia and India. Mission Netaji, the pressure group to which I belong, has long been fighting for the truth. During the process, our government has insolently accepted several times that it has stowed away a mound of secret information about Netaji in its hidden archives with no further plans to reveal them. One does not need to think twice to know who the principal sponsor of the disappearance mystery is.

To honour the Netaji's memory, there has been a long-standing demand for the construction of a memorial at a prominent place in New Delhi. A portion of vacant land between Rajpath and Rajendra Prasad Road was recently considered for this purpose. A request made in this respect by the INA Trust was forwarded to the ministry of culture for an opinion. The land is currently allotted to the Indira Gandhi Centre for Arts (IGNCA), which falls under the same ministry. In all, the IGNCA has 24 acres of land at Man Singh Road, but even this untenanted plot was not given for the memorial-construction, citing alternate plans to utilise it.

The demand for a memorial for Netaji in central Delhi is no crime, and it requires only a fraction of the cost needed for ambitious projects such as the Statue of Unity. The truth is that no political party today wants a share of Netaji's legacy, for reasons unexplained. Most of them look for business benefits and political mileage out of erstwhile leaders. Apart from the INA Trust, several other groups and individuals have also requested for a Netaji memorial in New Delhi. One such person is Somnath Gupta, an activist from Durgapur, West Bengal. In 2012 and 2014, Gupta wrote to the President and prime minister about the need for a memorial for Netaji and his requests were forwarded to the ministries of culture and urban development for action. Finally in 2014, the urban development ministry in its response, resorted to a Cabinet decision of October 3, 1956 that no statue or memorial should be put up in New Delhi without the Cabinet's permission. Gupta was also told that the Supreme Court, through an order on January 18, 2013, has restrained the installation of statues in state union territories. 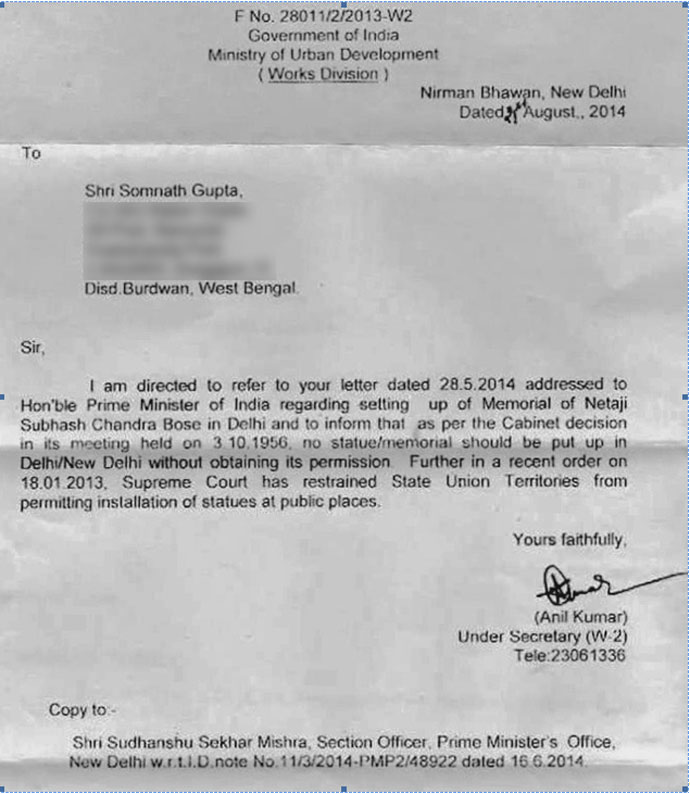 Come March 2015, and the BJP government decides to construct a memorial in New Delhi for former prime minister PV Narasimha Rao. Under the leadership of urban development minister Venkaiah Naidu, the government goes ahead with the plans, gives all approvals, and in three months, the memorial becomes ready at Ekta Sthal, pretty much in the Union Territory. Political analysts saw it as a clever move by the Narendra Modi government to dislodge the legacy of the Nehru family in the Opposition's camp.

It will be false to say there is no Netaji memorial in Delhi now. There is one at Tikri Kalan in outer Delhi, which does not have a presence even on Delhi's tourist map! It was built in 1998 but has been abandoned since 2000. Land disputes and legal procedures have marred the sanctity of the place. For our political leaders, Netaji is a second-grade citizen, and they might think an abandoned memorial is best suited for a forgotten hero.

With messianic zeal, Netaji once roared to the INA soldiers to gird up their loins and march to Delhi to encounter the enemy in its den. And what has Delhi returned him? A deserted memorial at a far-off place, and heaps of disrespect and political relegation over the years. Times have changed, but Delhi is still an enemy's den for Netaji's memories - pretty much hostile as it was in the 1940s. History has it that independent India's first government had forbidden the display of Netaji's images in barracks and offices of our armed forces. Fast forward 70 years, and the government hides its face behind administrative red tapes to not sanction a memorial for Netaji. Delhi has places for babus and netas to meet over drinks for striking deals and flaunting the power of golf clubs, but nothing for the man who was instrumental in bringing freedom to the country!

I can understand why Louis Mountbatten ordered the demolition of the INA monument in Singapore. At least, Mountbatten showed the heart of a lion in hating Netaji - an enemy of the British empire - from the beginning to the very end. But my own government is acting like a monkey at the circus - it tries to hold aloft the ideals of Netaji with its hands, and at the same time, attempts to bring down his legacy with its prehensile tail. In the process, the monkey looks terribly odd, bringing no fun and frolic, but just pity and contempt on itself.

Post your comment
#Netaji, #INA, #Jawaharlal Nehru, #Subhas Bose
The views and opinions expressed in this article are those of the authors and do not necessarily reflect the official policy or position of DailyO.in or the India Today Group. The writers are solely responsible for any claims arising out of the contents of this article.