But for two life-size cut-outs greeting visitors at the entrance, Stall 292-303 at New Delhi World Book Fair wouldn't stand out.

It is hosting an exhibit by the "literary" wing of India’s most powerful far-Right group, the Rashtriya Swayamsevak Sangh (RSS), and the two figures flanking its entrance are Hindutva ideologues KB Hedgewar and "Guruji" MS Golwalkar.

That the RSS aspires for a Hindu Rashtra - a nation governed by Hindutva beliefs, where every Indian, irrespective of faith, reconciles with his/her Hindu origins - needs no introduction.

Yet, for the uninitiated, the "literature" at the RSS’ stall would betray the Hindu Right’s deliberate tossing of a Molotov Cocktail. 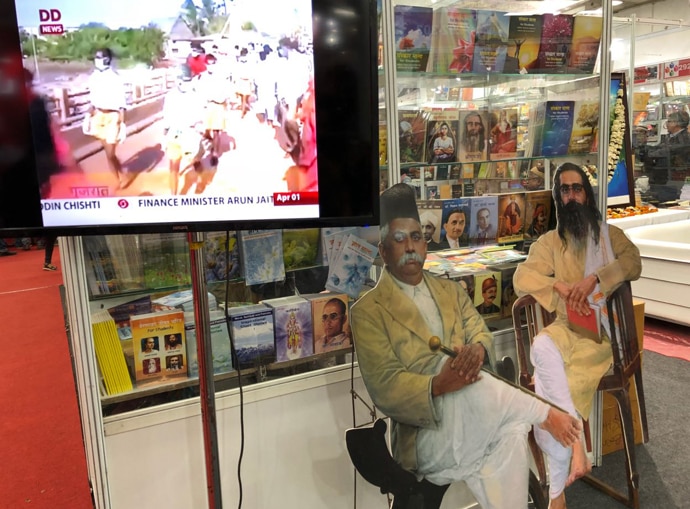 Sample these titles from the "Jwalant Vishay" or "Burning issues" section: Christianity Exposed, Islamisation of India by the Sufies, Muslim Appeasement, India towards an Islamic State - A Warning! (Bharat Islami Rajya Ki Or - Ek Chetawani!), Two faces of Islam and Shri Guruji and Indian Muslims.

Written by Golwalkar and Hedgewar, the most revered sarsangchalaks in the RSS, and sundry other karyakartas, these slim titles exhort Hindus to consolidate as an indefatigable force for future “wars” that may make the “community vulnerable”.

In Shri Guruji and Indian Muslims, Golwalkar is quoted as citing the “Islamic” invasion of the subcontinent, the killing of Hindus by Muslims - from the medieval era to modern India - as reasons for what is dubbed “Hindu terror” against Indian Muslims.

However, there is no mention of the numerous Muslim killings and casualties in wars and riots across the subcontinent.

Golwalkar evokes Hindu asmita (pride) in nearly every paragraph, calling for "panth nirpekshta", or non-sectarianism, unlike secularism itself - which is embedded in the Constitution of India.

He describes Indian Muslims as a monolith - who are historically belligerent, whose ethos hasn't moved an inch since the medieval era.

But the RSS ideologue assures that Indian Muslims - who he calls “Ahindus” - won’t be treated as second-class citizens in Hindu Rashtra. A few titles from the 'Jwalant Vishay' or 'Burning issues' section on display. (Credit: Charumathi Sankaran)

Browse the other titles and they echo Golwalkar’s views: his criticism of secularism, its “misuse” to appease minorities wherever they are in a majority in India and his conviction that Muslims have practised gau hatya (cow killings) to spite the majority.

This forms the crux of arguments to support Hindutva goals such as removal of Article 370 from the Constitution and bringing into force the Uniform Civil Code.

In fact, Golwalkar’s branding of Indian Muslims, riddled as it is with historical inaccuracies, seems tepid compared to the alternative facts in few of the other titles published by the Sangh.

In Muslim Appeasement (Muslim Tushtikaran), written by Nityanand, the Sabarmati Express carnage of 2002 that triggered the Gujarat riots is used to pivot the narrative towards anti-Muslim rhetoric: the refrain being "the creation of several Pakistans within India".

Nityanand asks why “secular politicians” didn't weep when “5,000 Muslim rioters set a train carrying Hindus on fire with petrol bombs” in a “genocide”.

Basic fact-checking is necessary to debunk this claim. While the Sabarmati Express carnage was indeed a conspiracy - 59 lives were lost in the train burning incident - 5,000 Muslim rioters were not responsible for it. In March 2011, a SIT court convicted 31 people and acquitted 63 others in the case.

What Muslim Appeasement doesn't mention is that the Gujarat pogrom claimed the lives of 790 Muslims and 254 Hindus.

During the pogrom, Prime Minister Narendra Modi, a former pracharak himself, was chief minister of the state.

The same text also warns of the “dangerous trend” in population growth, citing Census 2001 figures as proof of the rising number of Muslims in the country.

In what looks like a style guideline for titles published by the RSS, Hindus, Jains, Buddhists and Sikhs are categorised as “Samasth Hindu” while the Census of India recognises independent faiths Hinduism, Sikhism, Buddhism and Jainism.

The author’s account lacks facts on this count too.

That India’s Muslim population grew by 89 per cent in 60 years doesn't even qualify as an overstatement.

Far from shrinking, the population of Hindus saw a record growth of 103 per cent in 60 years up till Census 2001: the category “Hindus” earlier included communities like Lingayats, Sarnas and Jains that broke away from the fold.

To warn the Hindu population of a potential modern-day invasion, Muslim Appeasement also cites “Jauhar", or mass suicide through immolation, by "Hindu women" during Partition as evidence of Muslim aggression and anti-Hindu sentiment.

Women were brutalised in uncountable ways during Partition, their bodies treated as a battlefield for what feminist historians call a staggering range of atrocities.

But, contrary to the narrative spun by works like Muslim Appeasement, women of every faith - Sikh, Hindu, Muslim and Christian - were victims in the mass violence.

While "Jauhar" has been memorialised as self-sacrifice for centuries, to glorify the practice today is to glorify honour killing of women in modern India.

Such celebration of women’s valour hinges on a false sense of validation - a recurring theme in the Sangh titles I read.

In Sanvardhini, a selection of thoughts on the Indian perspective on women, one essay on women’s political outlook questions the worth of freedom outside the supreme structure that is family: what good is such individual freedom, it asks, with “broken family” and “broken values”?

Another essay warns of the perils of “love jihad”, urging parents to protect their daughters from infiltration the Hindu faith is vulnerable to.

Ironically, women’s agency, their right to choose partners of any faith and their right to privacy - guaranteed by the Constitution - are obliterated from this narrative.

At a time when attacks on India’s religious minorities by Hindu Right groups have become a pernicious norm rather than an exception, Sangh "literature" at a world book fair in India’s capital is calling for a communal revival.

It is amplifying the voices of vigilantes and rabid exclusionists committing human rights violations.

That the Sangh, in the written word, is splintering the plurality that makes India - the very plurality Modi, a former Sangh pracharak, took an oath to protect as prime minister - is a grand paradox. PM Modi took pride in celebrating India’s unity in diversity most recently on his radio address Mann Ki Baat.

But the bookshelves have dropped pretence, and the writing is on the wall: Agent Provocateur is the mainstream in New India.