The green body could have made other changes, including restoring the previous duration of the pilgrimage.

A pilgrimage is undertaken for that special inward journey, for soulful awareness and, if it is a pilgrimage to a shrine in the captivating Himalayas, the immense pleasure of just being there adds to the overall experience.

While some pilgrimages are undertaken alone, others are a manifestation of a boisterous assemblage. Just as chanting “Bam Bam Bhole” or “Om Namah Shivay” is the very essence of the pilgrimage to the Amarnath Cave, considered the dwelling of Lord Shiva, in the Kashmir Himalayas. Last reaches of the Amarnath Yatra, a must trek across glaciers. If it rains, muck and snow-melt make it all the more slippery. PC: Anantnagonline.in

The collective energy and enthusiasm derived from the sloganeering keeps pilgrims inspired during the high-altitude trek, boosts the enthusiasm of the oh-when-will-I-reach kind of tired trekker and, in general, marks the spiritual camaraderie in the overtly religious mood.

After a gradual yet exhausting trek of 35km, if one has taken the Pahalgam route or the 18km arduous trek on the Baltal route, upon reaching near the cave at the altitude of 13,000-odd feet, one is often faced with breathing trouble, cold and god-forbid if it has rained, muck on the slippery glaciers dotting the higher reaches of the route.

What keeps pilgrims going are constant chants of “Bam Bam Bhole”, “Har Har Mahadev” or “Om Namah Shivay”, which only intensify as they begin climbing the ultimate set of steps to reach the cave.

The frenzy, if it can be called so, reaches a crescendo as the pilgrims stand right in front of the ice stalagmite – the natural Shiv Linga – and repeatedly seek blessings, chanting jaykaras and sloganeering in the name of the lord.

This is what the National Green Tribunal (NGT) banned on December 13.

The green court ordered that “the devotee/pilgrim or anybody while standing in front of the Amarnath Ji Maha Shivling – a natural formation in the cave – shall maintain silence at that place. This restriction is not applicable to any other part including the main stairs leading to the holy cave”. 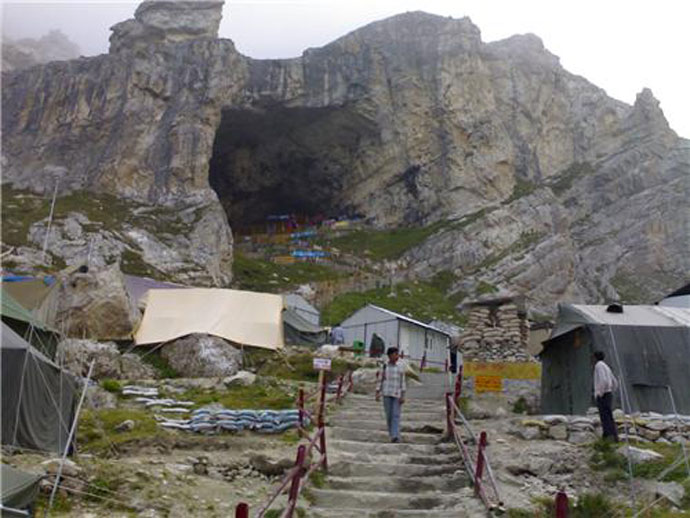 “On the last stairs, proximately 30 steps leading to the holy cave, it should be ensured that no person/pilgrim/devotee carries any material as it is already the practice of the board. We make it clear that on the stairs which are below these stairs, we place no restriction of any kind,” the NGT clarified on December 14, after its order was misread and led to much confusion and protests the previous day.

Excepting the daily aarti, the NGT justified the decision: “This direction in our considered view is required to maintain the sanctity and pristine condition of the holy cave on the one hand, while, on the other, to ensure that there are no adverse impacts of noise, heat, vibrations etc upon the Amarnath Ji Maha Shivling, so that the pilgrims coming in the later part of the limited period available to the pilgrimage are also able to have the Darshan of the Amarnath Ji Maha Shivling.” 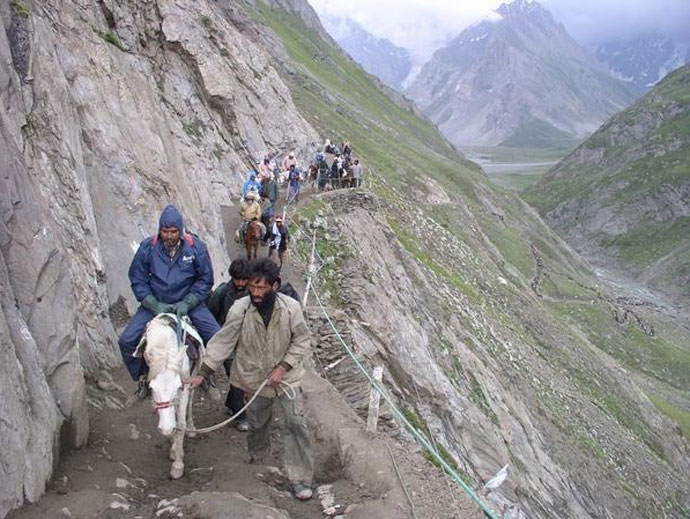 The crowded hill trek – the narrow path is shared by pilgrims on foot and those on ponies. PC: BiharPrabha.com

Despite its good intentions, I feel even this decision is bound to create politico-religious ripples in the already charged, polarised atmosphere of India and it also needs a re-look when it comes to weeding out the actual problems to protect the fragile environment of this pristine site in south Kashmir.

The NGT’s principal bench, headed by chairperson Justice Swatanter Kumar, also directed that a single queue of people walk towards the main cave from the last check post; it said pilgrims would have to deposit mobile phones and other belongings at the last check post and that the shrine board authorities should consider buiding a separate room where people can keep their valuables.

As I said earlier, there can be no questioning of the “intention” of the NGT; of course, it aims to preserve the delicate ecology of the region bombarded with lakhs of people in a short time period. But “silence” in front of the shrine appears impossible. 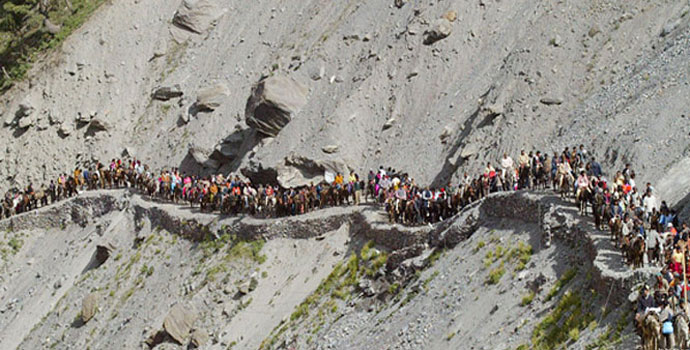 Negotiating the fresh, slippery snowfall, trekking at 10,000plus feet, thousands and thousands of pilgrims opt for the arduous trek for a glimpse of the ice stalagmite – considered as Shiv Linga by the devout – inside the more than 100-feet high, huge, almost cubical, cave on a rocky mountain face. The height of the ice stalagmite varies from year to year.

For the NGT to hope that the teeming millions of pilgrims of all hues from across India will not chant “Om Namah Shivay”, “Har Har Mahadev” or “Bam Bam Bhole” when they are face to face with the Shiv Linga is a tad too optimistic. The sheer numbers tell it is impossible.

It was these rising numbers that led to increased instances of pilgrims dying en route or falling sick; the almost stampede-like situations at critical junctures on narrow paths along the slopes with an almost 1,000-ft deep valley on the other side, and the poor maintenance of the camp sites dotting the route that prompted NGT’s directives for the SASB.

And then, there is also the issue of rehabilitation in relation to horses/mules.

The Amarnath Shrine is managed by the SASB, constituted by an Act of the Jammu & Kashmir state legislature in 2000. It is responsible for the better management of the Amarnath Yatra, upgradation of facilities for holy pilgrims and related matters.

It has been embroiled in legal battles, first in the Supreme Court and now in the NGT, vis-à-vis facilities and infrastructure for the pilgrims even while protecting the environment along the yatra route.

What can be done instead?

I undertake what I call adventure pilgrimages and embarked on one such to Amarnath in the year 2000. Going by my personal experience in the mighty Himalayas and from accounts of similar treks undertaken by my friends in recent years, I have a few suggestions.

The NGT might as well have restored the Amarnath Yatra’s duration to the traditional one month – from Guru Purnima to Rakhi Purnima – according to Hindu calendar. It has been almost 8-12 days ahead of Guru Purnima for many years now.

There have been attempts and demands for restricting the number of pilgrims on any given day. The NGT could have put a cap on it and asked for strict implementation of its diktat. If pilgrim numbers can be restricted at the Gomukh glacier, another Himalayan shrine, and the origin of river Ganga — its main stream Bhagirathi — why not at Amarnath? The crowded and congested Sheshnag Camp with litter on the lower side of the mountain slope and glaciers on the higher reaches. PC: Ghumakkar.com

The langars/bhandaras (free food distribution stalls put up by non-profits or religious groups) along the entire route offer anything and everything – right from the basic fare of daal-bhaat-roti-sabzi and hot milk to fancy items such as aaloo tikki, aaloo chaat, chilla, dahi bhalle, chowmein and even dosa. Imagine having dosa — a dish that needs fermentation, which becomes difficult at that cold, high altitude — on the pilgrimage!

Few years ago, the Supreme Court had banned the sale of junk and oily food and aerated drinks on health grounds. The NGT could well have banned all fancy food items and ordered soul food, appropriate for pilgrimage at that altitude.

Incidentally, there has been no word about the helicopter sorties that go on during the entire duration of the yatra. Earlier, helicopters landed barely 500 metres away from the cave, but few years ago, the location was changed to Panchtarani, about 6km from the holy shrine.

But the sheer increase in the footfall of pilgrims opting for helicopter rides has meant an increased number of chopper trips in the verdant valley. The noise generated from helicopters — especially during landing or take off — triggers avalanches and even when the site of landing is a relatively open space, sorties might lead to such untoward events.

Instead, the NGT has ordered that the cave be a silent zone — this, I suspect, will be challenged by the overtly religious or pseudo-religious.

#Noise Pollution, ##NGT, #Amarnath Yatra
The views and opinions expressed in this article are those of the authors and do not necessarily reflect the official policy or position of DailyO.in or the India Today Group. The writers are solely responsible for any claims arising out of the contents of this article.