Nirav Modi fled from India, reportedly with about several thousand crores in his metaphysical pocket, in 2018. The figure is approximately a heady Rs 11,400-13,400 crores.

In early 2018, the Enforcement Directorate (ED) made inchoate efforts to procure Modi’s passport. 'Inchoate' because rather than impound, the ED merely revoked it. A diffusion notice was issued which is merely an alert mechanism that requests cooperation for his arrest — it does not really mandate the arrest of a person.

Quite a tepid reaction towards a man who had apparently looted the country.

Nirav Modi, nonetheless, continued to travel, and, to add insult to injury, he was recently found ensconced in London with a national insurance number in tow. A national insurance number permits him to carry on business in Britain's multicultural capital. According to recent reports, a UK court has issued a warrant for his arrest after the British Home Secretary certified India’s request for his extradition. 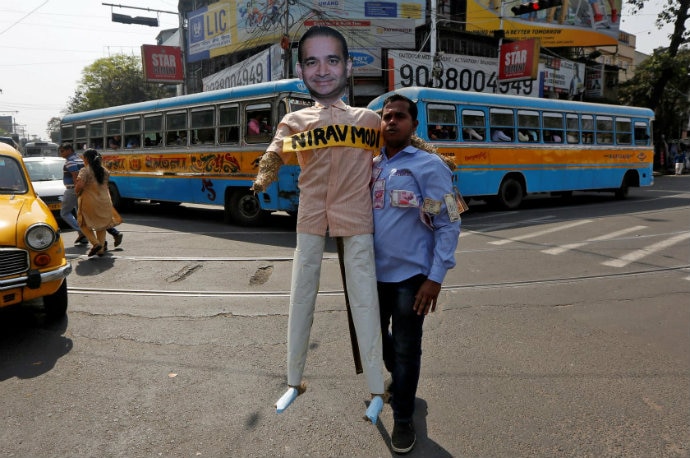 Within the country, the arrest of Nirav Modi is generating a sense of national pride. (Source: Reuters)

The recent actions of the past week regarding Modi, while appearing robust, may actually be more in terms of international posturing. They reflect India’s desire to be given recognition and acknowledgement, in the form of cooperation from western powers. This move was more imperative in light of the recent China snub qua the blocking of Mohammed Azhar from being listed as a global terrorist. It was, and is incumbent upon India, as an economy-in-transition, to show the other Asian hegemons that its needs will be addressed and that it has good ties with the developed nation(s).

Within the country, of course, it generates national pride that the wishes of the nation are being accorded due relevance by global powers, at the behest of an Indian government with a sense of direction. As for Britain, it may be sensible to support India in light of how easily China’s expansionist and economic neo-imperialist designs are making it harder and harder to keep such a large and ambitious land mass in check.

Legally, however, the route to achieving actual results has, and will be mired in politico-economic power play and legal procedures.

Earlier, Modi pursued legal remedies against the ED in India with regard to the attachment of his properties — this was to no avail. With these fresh developments, Modi will probably attempt to challenge the ED once again in India.

Modi’s extradition will be largely governed by the Extradition Treaty between the Government of The Republic of India and the Government of the United Kingdom of Great Britain and Northern Ireland, 1993. Under Article 12, while a provisional arrest may be made upon an application by the Requesting State, once a warrant is issued, the person will be released unless a request for extradition is made within 60 days. A telling recursivity loop will emanate from this proceeding as well as those pending against Mr Vijay Mallya. (Source: Reuters)

What is most important in such circumstances is how the treaty is — and will be — interpreted and applied domestically by actors within the UK.

In their book Bankrupt: Global Law Making And Systemic Financial Crisis, Halliday and Carruthers (2009), write about the cycle of recursivity to show the interaction between the law in the books (enactment) and the law in action (implementation). Feedback loops starting from local actors and government and going all the way up to international institutions and then back down again indicate how changes in law and its application may occur over time. Via this cycle, local actors can resist law and frustrate global efforts by either ignoring the law by not utilising it at all, or ruling against it.

A telling recursivity loop will emanate from these proceedings as well as those pending against Mr Vijay Mallya.

This treaty reflects an interplay of legality as well as diplomacy. Diplomacy is important because Article 11 specifically mentions the request for extradition is to be via diplomatic channels. Furthermore, it is only via diplomacy that it may be ensured that both nations are at parity regarding their good intentions towards each other in how to proceed with the matter.

Britain’s trial of Modi will be telling of how it views its relationship with India.

Another alleged offender, i.e. Mr Vijay Mallya, is still in London and out on bail since his extradition hearings began in April 2017. Given the changes in the Asian landscape regarding aggressive power moves by China and Pakistan, it may be for the best that India is not alienated by the western powers.