Not Just a Shah Nama: Why I think Narendra Modi's successor could well be a woman

The mocking levity around Nirmala Sitharaman and Smriti Irani shows we can’t stand women making strides in politics. Thankfully, they aren't waiting around to listen to misogynistic criticism.

Narendra Modi never fails to surprise his fans and foes alike. Thus, when almost everyone had all but made Amit Shah Finance Minister in the Modi 2.0 cabinet, he stumped them by giving the portfolio — to Nirmala Sitharaman.

The commentariat had to quickly change tack from how Gujaratis were genetically engineered to handle finance to women having a natural aptitude for managing budgets, as they do it at home all the time. A rather sexist take, one must admit, but, perhaps, the best one could think of when caught unprepared. Equally sexist were WhatsApp jokes doing the rounds with memes of Amit Shah and Nirmala Sitharaman: “India is changing under Modi. Now man will manage home and woman will manage finance (sic).” Funny much? 'Jokes' like these reveal our deep sexism. (Photo: Received via Whatsapp)

However, the common refrain — especially among women journalists — was how Sitharaman had once again shattered the glass ceiling (the last time was when she became India’s Defence Minister, only the second woman to do so after Indira Gandhi, who handled the portfolio for a brief period while she was Prime Minister). A time-worn idiom that prompted a local wit to quip, at this rate, Saint Gobain or Asahi Glass may introduce a new brand of toughened glass called “NS Proof Glass”.

Levity apart, these frivolous comments tend to put a premium on gender over merit, which does not help the cause of diversity.

It is particularly disappointing when such superficial assertions come from other women professionals, who ought to know better.

Women politicians in India may have been short on numbers but never lacked in impact. Successive governments have passed the buck on the Women’s Reservation Bill but that has not deterred the rise of “nari shakti” in Indian politics. In fact, it can be argued to the contrary that of all professions — showbiz and media included — politics has been the least inimical to accepting women in its fold.

This is probably because in India, the tradition of women participating in public life and politics precedes the Independence movement.

Even before the mutiny of 1857, there were the likes of Rani Laxmi Bai and Begum Hazrat Mahal, who fought against the British, resisting the Doctrine of Lapse. Rani Avantibai Lodhi of Ramgarh, Rani Jindan Kaur and many others participated in the revolt. The history of India’s Independence struggle is full of brave women, who matched men step to step, shoulder to shoulder. While the names of Sarojini Naidu, Aruna Asaf Ali and Savitri Bai Phule are easy to recall, there were also Matangini Hazra of Tamluk, West Bengal, Umabai Kundapur of Hubli, Karnataka and Rani Gaidinliu of Manipur, names that are sometimes lost in history.

Captain Laxmi Sehgal became an icon for leading the first women’s regiment of the Azad Hind Fauj — but many may not know Sucheta Kriplani was a member of the Constituent Assembly and part of the sub-committee that laid down the Charter of the Constitution.

But even without counting the first lady Prime Minister, President and the all-powerful chairperson of the UPA, the country has produced iconic and firebrand politicians and parliamentarians cutting across party lines over the last 70-plus years. Among the socialists were stalwarts like Mrinal Gore and Pramila Dandavate. The communists had their own list of luminaries like Geeta Mukherjee, a seven time-member of Parliament to KR Gowri Amma in Kerala.

The Congress too produced a galaxy of women leaders outside the Nehru-Gandhi dynasty through the decades. Ambika Soni, Margaret Alva, Mohsina Kidwai, Jayanti Natarajan to name a few.

The remarkable feature of women politicians has been, barring a few who were there due to family linkages or as proteges of powerful mentors, that the majority came up on their own right. Who can be a better example in recent times of a mass leader coming up from the grassroots than Mamata Banerjee? 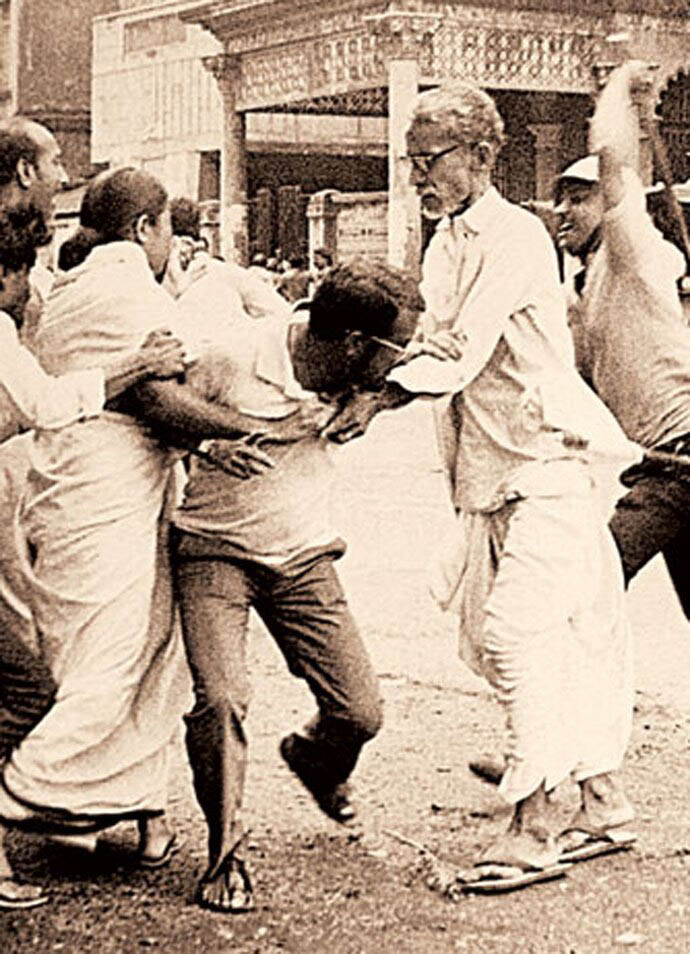 She stood her ground: Mamata Banerjee is an example of a brave woman leader who literally fought it out. (Photo: India Today)

One of the factors that contribute to women politicians making their own place in party organisations and governments is because of the strong commitment with which they come into politics. Many are products of student politics in university or youth activism that shaped their beliefs in formative years. They come with a different order of conviction and ambition rooted in idealism. They seldom enter politics by default or drift. It is a career call they take fairly early, making conscious adjustments between personal and professional lives.

Therefore, by definition, they are fighters who do not give in easily.

People have been less than fair to the BJP about the space it provides to women.

Since the BJP draws much of its talent from the Akhil Bharatiya Vidyarthi Parishad (ABVP), it has traditionally had an active women’s cadre. Though Sushma Swaraj, Anandiben Patel, Sumitra Mahajan and Uma Bharti were the few names known nationally, it has a tradition of grooming young leaders.

Significantly, what distinguishes stalwarts like Nirmala Sitharaman is that they earned their spurs batting for the party even when it was out of power. They were in it for the long run and did not hanker for office at the first opportunity.

That there is more discussion on portfolios assigned to a woman minister than to men in the cabinet reflects the inherent misogyny in our society.

But, as we know, it is not just the men who gossip — women do not display much ‘sibling sympathy’ either.

Smriti Irani was at the receiving end of many unkind cuts when she was made HRD Minister in Modi 1.0 Cabinet. Even now, people have tried to make light of her Women and Child Welfare Ministry. Many refuse to recognise how khadi made a massive comeback during her previous tenure in the Textile Ministry. There have been snide suggestions that Nirmala Sitharaman is a nominee of Arun Jaitley and will keep the seat warm till his return — nothing could be more unfair after Sitharaman proved her executive acumen as the Commerce Minister first and then, Defence Minister in the previous Modi government.

Here too, the Lutyens’ mindset is at play.

Although the elite chatterati may have reluctantly come to accept Narendra Modi for another five year-term as Prime Minister, they would still like him to submit to the Khan Market consensus for selecting his team.

However, a captain like Narendra Modi follows his own counsel since he knows the buck stops with him, literally. Modi has always laid emphasis on last-mile delivery. If there could be a criticism about the Finance Ministry in the last term, it had to be on its execution ability, especially on demonetisation and the Goods and Services Tax (GST). With a disciplined administrator and an eye for detail, the Finance Ministry under Sitharaman can be expected to vastly up its implementation act. Macro-economic policy will always be decided collectively at the highest level of government. However, its successful and time-bound rollout would be the key.

In that, Sitharaman can make a crucial difference.

If people bring up the question of mass base, they have to only be pointed towards Smriti Irani to understand what a woman can achieve by sheer grit. Forever mocked as a politician who never won an election, she silenced her critics — and how — by the resounding victory in Amethi, built on tireless efforts of five years.

Meanwhile, the corporate world and the media should make more room at the top for women. Bollywood must bring pay parity.

As far as politics goes, for all you know, Modi’s successor could well be a woman.

Also read: Women in politics are just politicians. They are not saris, jackets, or a particular kind of laughter