With the PM's own magic on the wane, the BJP cannot depend on only him to deliver the goodies.

It is a sign of his desperation that PM Narendra Modi does not want to leave anything to chance in the 2019 general election.

Acutely aware that the clock is ticking away and what remains of his tenancy will only add to anti-incumbency, he has seduced Nitish Kumar, neutralising the only other “challenger” on the political landscape.

Possibly, Modi believes that once the political rivals are fixed, then the need for performance on the governance front simply does not arise.

But Modi needs to keep in mind that fruits of development must be visible on the ground and the people should feel they are active participants in the growth process. Unless this happens no amount of sophistry will help.

An equally pliable and desperate Nitish has allowed himself to be coopted so that he can piggy-ride on the NDA in the 2019 election; but a man of all seasons, Trojan horse Nitish can be trusted to catapult onto the national stage at a time of his choosing.

Given that the “pretender-messiah” has no qualms in abandoning the Bihar electorate - which had embraced him with gusto - Nitish could still spring a surprise on the political merry-go-round.

But weaning away smaller players from their existing formulations will not help the BJP unless the Congress is “ostracised”. So, what was in 2014 a tirade against the “nikkami maa-bete ki sarkar” has now become a campaign to rubbish the Gandhis as the fountainhead of corruption.

Ironically, like the Congress, over the years, the Modi-led BJP has begun to suffer from the delusion that it has the inalienable right to rule the country and that it is the sole harbinger of good governance.

But once one sleep walks into this ''good governance'' trap, one is also lulled into believing that a single party's political domination will alone ensure incumbent Modi's triumph in successive elections. The BJP, therefore, loses no opportunity to drum it into the captive TV audience that the Congress can now be written off as a political party, which will self-destruct sooner or later. 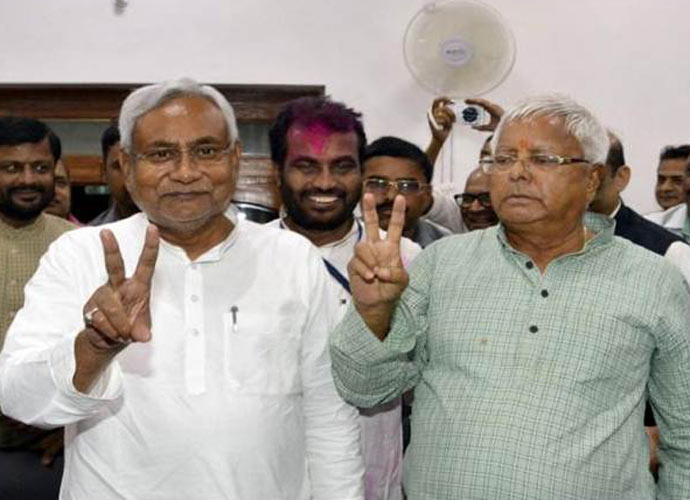 Once upon a time.

The entire “Congress-mukt Bharat” prognosis hangs by this highly toxic thread of political hegemony that the BJP is seeking to establish.

However, such a fantasy is possible only if the already diminished Congress suffers some kind of national erosion. That explains the high decibel “malign Gandhis” undertaking which has been again outsourced to party mavericks like Subramanian Swamy - the latter is now flogging the comatose Bofors horse after raking up the alleged legal infringements in the National Herald.

Apparently, the tirade now goes beyond lampooning the infirmities of Rahul Gandhi. And as the political halo around Modi dims, the enthusiasm and the audacious presumption with which BJP spokespersons fritter away their energies on national TV in targeting the Gandhis will surely touch a crescendo.

Modi also realises that the incompatibility between the demands of the Sangh Parivar and the agenda of development is eroding the credibility of the regime, and in 2019 the BJP cannot afford to put all eggs in one basket.

Also, with his own magic on the wane, the party cannot depend on only him to deliver the goodies.

With that has come a change in emphasis and the acceptance that a local face will be needed to connect with the electorate in states where the caste calculus and local factors are paramount.

With that, a great debate has ensued as to who will oppose the BJP in the 2019 elections. No one expects the Congress to change the balance of power on its own. But a partial revival of the fortunes of the 2014 losers - the Congress, the Left and the DMK - would have far-reaching consequences.

It matters little that the Congress and the Left are on the same side of the fence in West Bengal even as they are at each other’s throat in Kerala. Next, Mamata Banerjee could be a part of the Opposition matrix - the other “challenger” on the horizon - the state-specific hostility with the Left notwithstanding.

But these are early days and the Amit Shah-Modi combine has just begun weaning way winnable “allies” from their existing formulations, using cooption and seduction as political weapons. There will be more surprises and people like Tarun Gogoi need watching.

For BJP, Bihar was not a tough nut to crack: the Nitish-Lalu Prasad alliance had become feasible because Lalu had been disqualified from contesting elections. Ironically, it cleared the way for the Yadav “inheritors” but Modi caught up with them, first.

Also read: How is fascism not corruption, Mr Nitish Kumar?

Post your comment
#2019 Lok Sabha polls, #Bihar alliance, #Modi-Shah, #Nitish Kumar
The views and opinions expressed in this article are those of the authors and do not necessarily reflect the official policy or position of DailyO.in or the India Today Group. The writers are solely responsible for any claims arising out of the contents of this article.