Five things we learnt from the No Confidence Motion debate

Most voters will probably choose to remember July 20, 2018 as the day Rahul Gandhi did a Modi on Narendra Modi.

1. Pappu can hug saala: This was never so much a No Confidence Motion (NCM) against the NDA (the ruling alliance always had the numbers) as much as a test of confidence in Rahul Gandhi’s ability to lead the Opposition in Parliament.

Mr Gandhi’s performance thus far in the Lok Sabha has been singularly disappointing: he hasn’t made a significant speech in 14 years now as an MP, has an average attendance record, and even opted out of the Leader of the Opposition post in 2014. 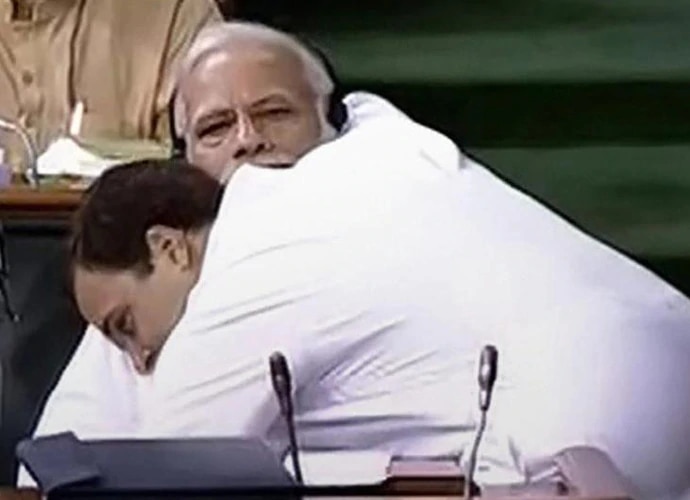 The hug was well-choreographed, a deliberate send-up of the prime minister’s inclination to embrace the rich and mighty. (Photo: Twitter)

Having promised a political earthquake last year if only allowed to speak in the Parliament, he had much to prove. As it transpired, Mr Gandhi did what a batsman is often advised when faced with unfamiliar, hostile conditions: use bold attack as the best form of defence.

His speech was limited in substance — he hardly offered an elaborate analysis of any major issue — but stood out for style, marked by sheer aggression and a self-deprecating manner (recall his confession that he knew the prime minister thought he was a ‘Pappu’!). If he wanted to contrast himself as the leader of the marginalised versus a “suit-boot ki sarkar”, or as representing the politics of compassion versus conflict, he partly succeeded by refusing to hold back in his criticism of the Modi government’s alleged big business links and authoritarian decision-making style.

Yes, there was an element of the familiar “shoot and scoot” politics in the manner in which Mr Gandhi raked up the Rafael aircraft issue, but, in an election year, where perceptions matter more than reality, the Opposition often punches wildly in the hope that the occasional blow lands at the right spot.

Interestingly, he didn’t mention the taboo ‘M’ word even once: he spoke of Dalits and tribals as victims of the Modi government but no mention of Muslim discrimination. Does the fear of being identified as a “Muslim party” so haunt the Congress leadership that it is now left to the Owaisis and Abdullahs to be the sole spokespersons for a politically disempowered community?

Of course, there was the dramatic hug at the very end, well-choreographed and designed to grab the headlines — a deliberate send-up of the prime minister’s inclination to embrace the rich and mighty.

It was pure political theatre — you would be tempted to call it reality tv ‘nautanki’ — that ended with an impish wink to a colleague. It was hardly the earthquake we were promised, it still will not erase the ‘Pappu’ image in the eyes of his detractors, but it does suggest that Mr Gandhi has finally learnt that to take on the Modi juggernaut, you have to be the unconventional rule-breaker.

Will Rahul the ‘love-guru’ be able to combat Mr Modi’s larger-than-life, charismatic but divisive presence? More crucially, can he be a magnet to bring together the disparate anti-Modi opposition? That question can only be answered by his first winning an important state election for the Congress this winter. For now, his partymen must be satisfied in the knowledge that their president is finally ready for a joust, even if it means having to ‘jhappi’ your way to the political centrestage.

2. Modi is still the Big Boss: Sycophantic Congressmen have a tendency to set the bar rather low, so Rahul’s histrionics left them feeling pleased as punch. Truth is, Rahul’s oratory can’t come close to matching Mr Modi’s dialogue delivery.

Narendrabhai loves a stage: in school, he would relish performing in one-act plays. He prefers election rallies and one-way ‘man ki baat’ programmes to the cut and thrust of Parliamentary debate, where he is forced to share the limelight with his critics.

And yet, he is unarguably one of the finest political communicators of our times, a neta who can play demagogue and governance guru with equal ease. By his high standards, this wasn’t the best Modi intervention: much too long-winded and a tad bureaucratic in its detailing.

The personal attacks on the Gandhi family, including mocking Sonia Gandhi’s accent, betrayed an angst from the past that will never go away. The lack of humility — he ever so often refers to himself in third person — remains his weakness, but the intense self-belief he exudes remains a big strength.

As he rattled out figures of his government’s achievements and mapped out an agenda of governance, few would be unimpressed with his grasp of issues, desire to “fix” the system, or by his steely determination to look for a place in history (note how he pointedly referred to being ready to face a similar NCM in 2024!). 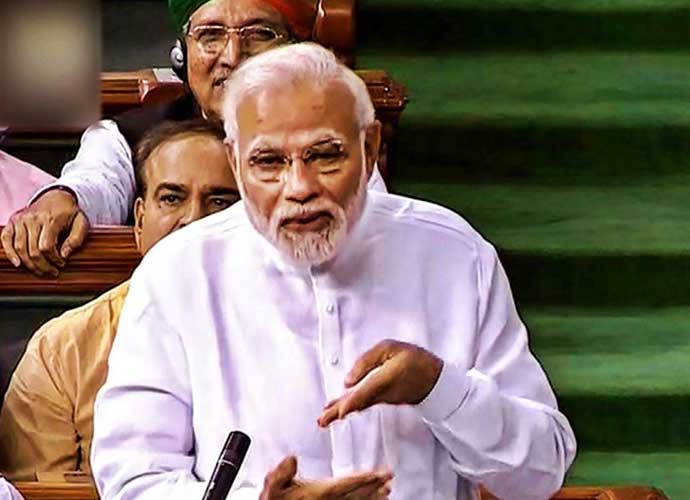 Modi is one of the finest political communicators of our times, a neta who can play demagogue and governance guru with equal ease. (Photo: PTI)

The problem is that in the Modi worldview, there is no room for self-doubt or self-criticism. Which is why the darker aspects of the regime’s past four years — from the failings of DeMo to agrarian distress to the lynchings of minority groups by murderous gau-rakshaks — are never fully confronted and explained.

Maybe, one day Narendrabhai will realise that “raj dharma” or good governance isn’t just about individual glory or unalloyed state power, but about institutional autonomy and a de-centralised polity. Till then, he can be smugly content that he remains the Big Boss of the political jungle.

3. Hey, there is more to Indian politics than Rahul versus Modi: TRP-hungry TV forces you to do things that aren’t strictly journalistic. One of them is rating a speech with numbers. So when asked to rate the Modi and Rahul speeches, I arbitrarily gave one of them a seven (Modi), the other a six (Rahul). Truth is, the best speech in the NCM was probably given by Jaydev Galla, a billionaire NRI MP from the Telugu Desam Party (TDP) who kickstarted the debate. The quality of backbencher MPs in the Lok Sabha is well below average, but Galla rose to the occasion with a speech that was marked by facts and rhetoric, emotion and conviction.

Yes, the American accent may have jarred a desi audience, but that can’t be held against him. The TDP had initiated the motion over their demand for special status for Andhra, and if the theme of Centre-state federal inequities was picked up by several regional party speakers as a parallel concern to the Modi versus Rahul main act, then Galla deserves some credit for it. 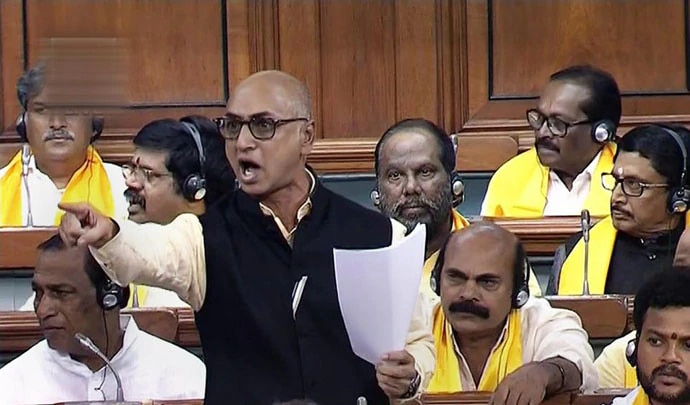 Galla's speech was probably the best in the entire debate. (Photo: Twitter)

Maybe, the TV camera too needs to discover new voices beyond the traditional national party spokespersons.

4. The speaker isn’t quite a neutral umpire: Sumitra Mahajan is a formidable eight-time Lok Sabha MP. She hasn’t lost a single election since being first elected to Parliament from Indore in 1989. And yet, as Lok Sabha speaker, she has lacked the political heft to hold the House together.

There have been enough occasions in the past four years when she appears to lose the plot amid allegations of partisanship: remember how the Union Budget was rammed through earlier this year without enough effort to ensure a proper debate? The no-confidence vote was another example where the speaker was partial to the treasury benches: could the Opposition, struggling to have its voice heard, have been given more time rather than simply allowing the ruling alliance to use their numerical strength to call the shots? 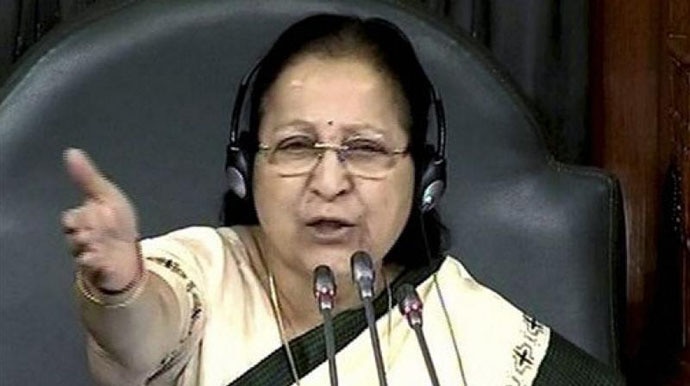 As Lok Sabha speaker, Mahajan has lacked the political heft to hold the House together. (Photo: PTI)

Even her admonishment of Rahul Gandhi was unerringly head-mistress like: was it really necessary to pull up Mr Gandhi for the “hug” almost as an after-thought more than three hours after the much-hyped event had gone viral? And what is more undignified in Parliament: MPs rushing into the well of the house at the slightest pretext, or a relatively harmless hug and a wink?

5. Indian politics is still in flux: In TV debates and blogs like this, we tend to position the 2019 General Elections rather conveniently as a Modi-versus-all battle. This may well be a narrative that suits Mr Modi and his lieutenant Amit Shah, who likes to describe the next election as the “51 per cent poll”, a reference to his firm belief that the BJP can get a majority of the vote share if a “maha-gatbandhan” (MGB) is formed against it.

The reality is that Indian politics is in a pre-election flux: there is no MGB yet nor is the NDA fully intact. The Shiv Sena’s decision to boycott the NCM suggests that the party is still smarting over its political isolation under the Modi-Shah regime. The TRS move to walk out without voting confirms that the Andhra-Telangana divide won’t be bridged easily, while the AIADMK’s decision to vote with the government is proof that there is now a direct hotline between the leadership in Chennai and Delhi, one that could make wounded Dravida pride a major issue next year. And the Biju Janata Dal still maintains genuine equidistance from the principal players.

Once the dust settles, a truism of coalitional age politics could reveal itself: most regional parties now prefer post poll to pre-poll alignments, since it allows them to keep all options open. Ironically, the one party that could play a key role in 2019 – the Bahujan Samaj party – wasn’t even present in the House during the NCM. Mayawati doesn’t have a single Lok Sabha MP: how much that changes, if at all, in 2019, is just one of the crucial questions blowing in the monsoon rains.

Post-script: The buzz before the NCM was that the Parliament debate could trigger off an early Lok Sabha campaign, with the possibility of the Modi government catching their rivals by surprise by pre-poning the general elections to December.

That may yet happen, but somehow, the rather uncertain post-NCM mood suggests that we could still be nine months away from the final denouement. And when the voting takes place then, it is unlikely that the Parliamentary debating skills of our MPs will resonate in the minds of the average Indian.

Instead, most voters will probably choose to remember July 20, 2018 as the day Rahul Gandhi did a Modi on Narendra Modi by, for once, catching the original master of surprise clearly off guard!