A gated colony guards its privilege much like the nation-state polices its borders, ignoring lived lives.

In Arvind Adiga’s Booker Prize-winning novel The White Tiger, the underbelly of globalisation is depicted from the perspective of a rich man’s driver working in Delhi, who kills his “master” and flees to Bangalore.

It was a disturbing account of jostling worlds so close to each other, yet so far apart, with the one inside the gated colony or a mansion deploying every means possible to keep the class and cultural “Other” out, while depending on the cheap labour of the very Other for its upkeep, its maintenance.

The story of globalisation, in which the lowest tier comprising the teeming multitude of people consuming under 10 per cent of its resources cater to the top tiers comprising barely 10 per cent of the people consuming over 90 per cent of the resources, is similar to the story of India’s privileged households, which employ domestic helps – “maids”/“manservants” – to get the jobs done. Cheap labour, acute exploitation, rampant abuse including sexual violence, harassment etc, are routine features of such a transactional but deeply class/caste/religion inflected relationship between the “babu/madam” and the “maid”.

And, sometimes, the daily violence – not always physical but mostly in the tone, tenor, distancing, curtness of language, in the maintenance of separate lifts/staircases/elevators for the household helps, in the daily apartheid between the employer and the employee – is met with a hitting back, a counter-attack, which then spirals into a full-scale class warfare, a standoff the privileged would keep under wraps to hide their unearned everyday excesses.

The case of Mahagun Moderne, described so often as a “posh” housing society in Noida’s Sector 78, is that, plus a bit more. A typical nouveau-riche enclave mushrooming in the sub-cities around the national capital, whose expansion is directly proportional to the country’s sense of self-worth, its nationalism measured in bricks and mortar with a nice varnish, its self-proclaimed cosmopolitan aspirations chalked out in the tennis and badminton courts as well as swimming pools inside the “condominium”, this is what the “New India” is all about.

Mahagun Moderne, the name itself betraying the pretentiousness elementary to this culture of pseudo-fusion, where eclecticism is limited to surfing restaurants on food apps and capturing selfies at perfect pristine moments, with the maid artfully edited out from the frame to look good on Instagram – this is the site that has decided to “ban Bangladeshi maids” after experiencing what some on Twitter have called #MaldaInNoida.

A maid was 'accused' of stealing & illegally detained in a Noida apartment complex. This is how our entitled NorthIndian middle class reacts pic.twitter.com/O0rnVMQFCu

Isn’t it strange that residents of Mahagun Moderne have heard of Malda, a nondescript northern district of West Bengal mostly known for its poverty and proximity to Bangladesh? That’s because #Malda is synonymous, thanks to immersive coverage on quite a few TV channels, with communal riots and its “Muslim population”, its harbouring of “illegal immigrants from Bangladesh”.

Googling Malda, perhaps for the very first time, the residents of Mahagun Moderne, did they sigh in desperation for their country as much as they started worrying about their own homes, as soon as they realised the helps within their own posh homes hailed from parts of West Bengal? Had anyone crossed over from Bangladesh?

The incident at Mahagun Moderne, where two rival complaints depict two rival worldviews, makes it amply clear. Zohra Bibi, 26 or 27-year-old, is a mother of three children and the domestic help working in one of the glitzy flats in a high-rise at this housing society, who according to her FIR, was beaten up when she demanded her two-month salary coming to Rs 12,000.

Mitul Sethi, the employer in question, however, said in his FIR that Zohra Bibi had tried stealing Rs 17,000 and he had CCTV footage to prove that. Between these two jostling claims, lies a yawning gulf of inequality, and a bitter class war is brewing in it.

The utter despondency of domestic labour in India has been captured in a few books and reports, that look at the paucity of laws to ensure the domestic workers get adequate pay, that they don’t get abused at the hands of their employers, or become victims of violence. 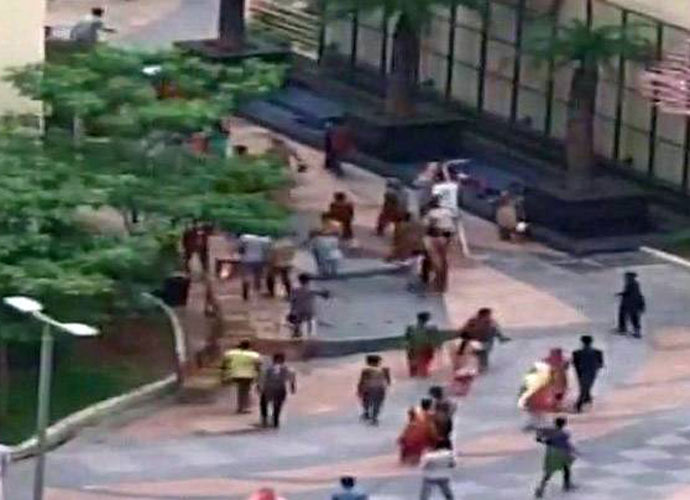 This isn’t just a case of keeping the poor out of a swanky colony, even as they plumb its pipelines and keep it clean, lubricated daily with staggeringly underpaid services. Photo: ANI

Tripti Lahiri, author of Maid in India: Stories of Inequality and Opportunity Inside Our Home, says even if the employers are themselves in a care-giving profession, such as teaching, medicine, nursing, the behaviour with the maids often assumes the residual toxicity of a class war.

Deep mutual suspicion, fronting of “merit”, guarding of privilege occur at the expense of ignoring histories of oppression, displacement (such as of tribals, Dalits) due to land encroachment, communal violence, natural disasters and many other instances of globalisation and/or development creeping in to exclude the many and further enrich the few.

In his fascinating study of Delhi and its suburbs, Rana Dasgupta writes of Gurgaon (but it’s equally applicable to Noida):

“The compounds in which its richest citizens take refuge from society are only the most extravagant manifestations of a more widespread isolationist ethos. Delhi is the pioneer after all of India’s private townships, where life is administered by corporations and surrounded by fences, and where one is cut away, therefore, from the broad currents of the country. Gurgaon, the Delhi suburb established by real estate giant DLF in the 1990s… has imitators all over the country… Gurgaon makes no pretense of being a ‘public’ space: the great numbers of the poor who clean and guard its houses and offices, for instance, cannot live there. To live in Gurgaon is to live in a housing complex protected from the outside by security cameras and armed guards… It appeals to people for whom the corporation has come to seem a far more fertile form of social organisation, than the state, and who seek out enclaves of efficient, post-public living.”

Of course, the very “armed guards” who are supposed to protect the gates of such housing societies, are also the ones related to, friendly with the domestic helps, the drivers, the cleaners, and others informally servicing these posh oases of living it up. In the case of Mahagun Moderne, a report in Hindustan Times says how the guards brought the situation under control by firing into the air.

Other accounts say Zohra Bibi’s friends and relatives, who live in Barola, a ghetto barely a kilometre away from Mahagun Moderne, were beaten up, and then resorted to stone-pelting. In a circular logic, who hurled the first stone is really irrelevant in this vicious cycle of poverty, privilege and their clashing discontents.

Yet, this isn’t just a case of keeping the poor out of a swanky colony, even as they plumb its pipelines and keep it clean, lubricated daily with staggeringly underpaid services. The banning of Bangladeshi maids after the July 12 ruckus, the accusation of stealing and violence, the instance of stone-pelting – all point towards a collective of individuals sure of their nationality and the privilege it accords in the new scheme of things.

Amid the din of “Digital India”, “Make in India” and other such patriotic schemes flooding our public sphere consumed online via social media and on TV, ganging up against another lot to keep it out is really the national pastime, the utmost compulsion.

Here, the border of the upscale colony becomes a synecdoche for the national border, and keeping the Bangladeshis out becomes a bigger duty, almost nationalistic in its single-minded zeal. There’s very little compassion, kindness and the ability to sympathise with those who cross over under perilous circumstances and transgress a border, a fence, braving seas and security forces, in order to come to the heart of the city, Delhi, Kolkata, Mumbai and their glittering, all-engulfing suburbs.

The insistence on gatekeeping isn’t only about preventing a ruckus – it’s as much about policing its own privileged sanctity. Hence, the responses to the Mahagun Moderne incident has been uniformly patronising: from the residents who have come together to banish the Bangladeshi maids and prevent a #MaldaInNoida, to the usual lamentations on oped pages of liberal news outlets about a lack of protection of domestic workers' law in the country. Statistics replace sympathy, data replaces concern and the gated colonies and air-conditioned offices go back to living the usual life of part-condescension-part-preaching from the pulpit.

This is sad. Just like the nation-state is erecting its borders for the poor and downtrodden, those fleeing persecution or penury, those braving the life of a refugee or an illegal immigrant in a hostile environment, our gated colonies are erecting higher walls of intentional blindness to “keep the dirt out”.

Even though the maid cleans their Italian marble floors in builders flats advertised as residential utopias, the maid herself is too dirty to be there, out of place, out of time. The hierarchies of new India are becoming ever more rigid and unkind and unresponsive to the pain in its neighbourhood. The walls are everywhere.

Also read: Only in Delhi do you get judged for where you live

#Bangladesh, #Class divide, #Domestic workers, #Mahagun Moderne
The views and opinions expressed in this article are those of the authors and do not necessarily reflect the official policy or position of DailyO.in or the India Today Group. The writers are solely responsible for any claims arising out of the contents of this article.