No salary for North Delhi Municipal Corporation staff: Why Centre vs State ego clash is to blame

The North DMC employees have not received their salaries since February.

If one asks an employee of North Delhi Municipal Corporation when was the last time they got their monthly salary on time, the answer would be ‘never’. Unlike Central government employees or even the employees of the Delhi government, the North DMC staff always gets their salary after two or even several, months. This is an average delay and most of the employees have made peace with this unpleasant situation. The reason being that this ugly scenario has become the norm rather than an exception.

This time though, the situation has hit rock bottom as the North DMC employees have not got their salaries since February! It’s a five-month delay, and that too during the time of an unprecedented pandemic like Covid-19. This is the unforgivable situation in India’s national capital. The authorities who are trying to pin it on Covid-19 — due to which Delhi government’s tax collection was severely impacted owing to businesses running dry — holds no truth because this has been the situation since 2014. This is pretty much the same time when the Aam Aadmi Party (AAP) government came to power in Delhi and BJP came to power at the Center. 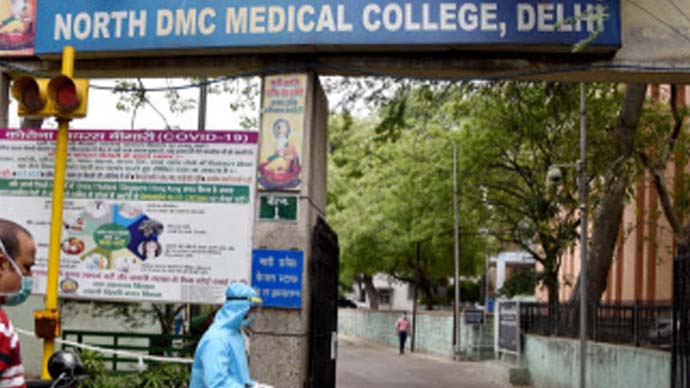 This time too, the salary issue came to notice only when the doctors of all hospitals run by North DMC threatened to resign en masse. (Photo: Twitter)

The constant bickering and tussles between AAP and BJP have led to North DMC staff becoming collateral damage. Both AAP (state government) and MCD (run by BJP) blame each other for this crisis. It seems that the MCD salary issue gives election fodder to both these parties. They are being bystanders in this crisis, which is a creation of their own fights and ego clashes. Interestingly, the Congress, which is now almost non-existent in Delhi, be it the legislative assembly or MCD, is much to blame for sowing the seeds of this crisis.

The Congress in Delhi under the then-CM Sheila Dixit decided to trifurcate the MCD into North, South and East Delhi Municipal Corporations. This led to a situation where Delhi now has three commissioners, three mayors, three standing committees and the paraphernalia that is attached to all of them, including three separate offices.

According to a media report, two of the three new corporations — the North and East Delhi Municipal Corporation — faced severe financial crunch post this trifurcation. A North DMC councillor explains that the North DMC had a debt of Rs 1,000 crore per year due to its expenditures being much higher than its earnings. Similarly, East DMC also had a debt of about Rs 500 crore to Rs 600 crore per year. Only South DMC, he said, was able to meet its expenses and even then, it was not making profits.

Evidently, the poor division of assets and expenditures between the three DMCs has led to a scenario where South DMC remains flush with cash as the tax collections and revenue generation is much higher from this part of Delhi. On the other hand, North and East DMC have become increasingly poor with extremely limited avenues of tax collection as most of the poorer regions of Delhi fall within these areas.

This is the reason why South DMC employees never complain. The sheer lack of foresight on part of the former Congress government in Delhi has proven extremely costly to all North DMC  employees and their families since then. Time and again, this situation keeps cropping up and every time, there has been abundant blame game within and outside TV studios. However, a concrete solution is yet to see the light of day.

The whole reason behind this systemic failure is that Delhi has two ‘power centres’. There are two foreseeable solutions to this. First is that the MCD’s trifurcation is undone and it is unified again. This is imperative so that the equitable distribution of resources can happen throughout Delhi and the status quo that existed pre-trifurcation can be reached again. The other solution is that the Centre takes the responsibility of paying the MCD staff directly, thereby entirely eliminating the role of the state government and the two power centres.

The bitter truth is that political parties have created this mess but none of them has to face the brunt of non-payment of salaries. Politicians — irrespective of whether they are from Congress, BJP or AAP — are getting their salaries on time without any delay. Their families don’t have to go through the pain, harassment and trauma of not having money. Also, Delhi’s public is to be blamed equally since they never come out in support of their civic staff. Only when civic workers stop cleaning the garbage produced by Delhi and the stench of that garbage reaches those living in highrise buildings, gated communities and apartments, do the people even bat an eyelid. Not because they have suddenly developed empathy for their civic staff, but because it bothers them and makes them uncomfortable.

This time too, the salary issue came to notice only when the doctors of all hospitals run by North DMC threatened to resign en masse. It was then that the Delhi High Court took suo moto cognisance of the matter. This is not because the system feels for them, but because at the time of Covid-19, Delhi requires the services of all doctors on duty and can’t afford their resignations. This would have derailed Delhi’s fight against Covid-19. The system acts only when something starts hurting its interests.

It is to be mentioned here that large sections of the media only covered the non-payment of the salaries to North DMC doctors. They did not report in detail about the same issue being faced by North DMC engineers, sweepers, cleaners and teachers (who have been at the forefront of distributing ration and cooked food in North DMC schools). Over 8,000 North DMC teachers are waiting for their salary since March, and many of them have had to sit on hunger strikes for weeks this month. However, their pleas and protests have fallen on deaf ears. Calling them Covid Warriors is a rude joke when the system can’t pay their salaries on time. These people who risk their lives for the citizens of Delhi are being put at financial risk by the system. If something happens to these Covid Warriors in the line of duty, who would be answerable? Especially when their entire financial resources would have either run dry or would be on the verge of it due to non-payment of salaries since February.

The apathy of Delhiites has made the system corrupt and political parties unaccountable. Today it is the North DMC staff; tomorrow, it could be anyone, considering the state of the economy. It is high time that the North DMC employees are paid their entire backlog of salaries till June 30. Also, the Centre and the state governments need to relook at the mess that the MCD trifurcation has caused. They need to come up with a lasting solution so that this kind of a situation never emerges again.

#Covid-19, #Staff salaries due, #North delhi municipal corporation, #Delhi
The views and opinions expressed in this article are those of the authors and do not necessarily reflect the official policy or position of DailyO.in or the India Today Group. The writers are solely responsible for any claims arising out of the contents of this article.

Freelance writer based in Delhi.