Many decades have passed since the US adopted and maintained a policy of “strategic patience” against North Korea’s military provocations. The brazenness with which North Korea threatens the US and its allies and the way the US administration and the powerful media have been consistently choosing to ignore those threats as mere provocations is not only mindboggling but nonsensical, and which can have devastating consequences for the West.

When US president Donald Trump and his administration declared that the time of strategic patience with North Korea was over, it was widely anticipated that a strong response was forthcoming against North Korea if it conducted any new missile or nuclear tests.

North Korea took the new US administration head on by conducting successfully a test of nuclear capable ICBM. And, furthermore, the North Korean state media declared the successful ICBM tests conducted on July 4 as “a gift to US on its independence day”, to denigrate the only superpower in the world.

The US and its allies as usual did tough talk and no action. That sort of timid response was not expected at a time when experts believe that North Korea is now in possession of powerful technology that could decimate US cities.

What remains even more puzzling is the fact that despite the huge threat posed by the North Korean ICBM tests, no great media attention was generated in the otherwise overzealous US and pro-western media.

It has been an amazing journey for the North Korean missile and nuclear weapons programme when analysed through the prism of media coverage. Firstly, the western media had been consistently playing down and questioning the notion that North Korea even possessed the technological capabilities to conduct nuclear tests. And, when that assumption was proven wrong, the western media began questioning North Korea’s capabilities of developing ICBMs that could put US cities in imminent danger of nuclear weapons attack.

Finally, when North Korea conducted a successful ICBM test, the same media outlets are now trying to befool Americans and the world in believing that North Korea may never be able to produce tactical nuclear weapons that can be delivered through ICBMs. 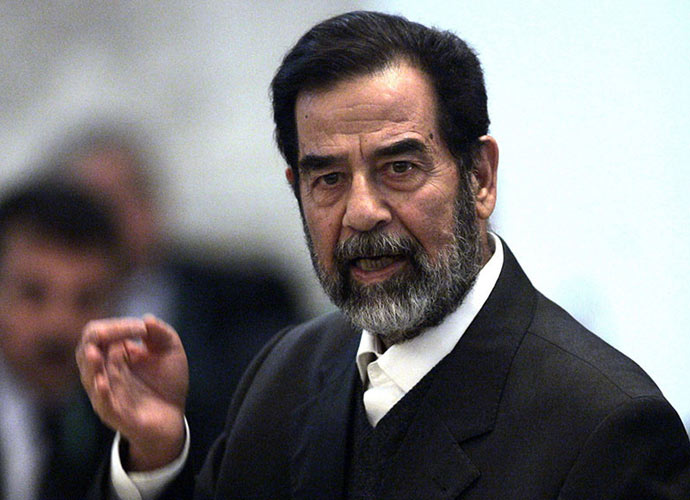 The US falsely accused Saddam Hussein of possession of weapons of mass destruction. Photo: Reuters

That begs a question - why are the US and pro-west media in no hurry to sound the war bugle against North Korea when the situation demands even greater urgency? Compare the North Korean situation with that of Iraq.

After the US falsely accused Saddam Hussein of possession of weapons of mass destruction, the US and the western media, both print and electronic, ran stories after stories to make Americans and Europeans believe that Hussein was hiding weapons of mass destruction and that he was one of the greatest devils who must be confronted militarily to preserve western civilisation.

The western media and on-payroll experts reasoned callously against showing strategic patience with Hussein, putting Iraq and the wider Middle East on the irreversible path of death and destruction with no obvious benefits for the US, the West and the World.

A similar story was replicated with Afghanistan, Libya, Syria, Pakistan, etc. despite the vast devastation caused by the west’s two decades of war on radical Islam and Islamic terrorism - individual cases of violence committed by disgruntled and petty criminals in the name of Islam continue to attract prominent coverage in the western media.

And, in the process big news events such as coming out of North Korean belligerent nuke capable ICBMs tests and China’s assertive foreign policy objectives and the magnitude of threat that these events pose to the western civilisation remain sharply attenuated.

That begs explanation. Why did the western media exaggerate threat perceptions emanating from individual Muslim terrorists and Muslim countries that have no practical means of unsettling the west as opposed to North Korea or China that can practically decimate western civilisation?

The answer is the following: It has been more than two decades since the US and pro-west media strategically and according to a well chafed out media policy began raising the red-herring of Islam being incompatible with the west, which is a blatant lie given the fact that almost all of Muslim majority countries of this day are allied with the west.

The vicious anti-Muslim media campaign helped the rise of anti-Muslim sentiment and right-wing nationalism in the US, Europe and beyond in India, Myanmar, etc. Powerful pro-west media has invested huge resources in building an anti-Islam media empire and a vast public base that follow anti-Muslim news.

And, North Korea and China’s aggressive policies in the Pacific and beyond remain a diversion to that investment. Needless to say, North Korea today poses a grave danger to western civilisation but focusing media attention on that threat will take the focus away from Muslim affairs and that would be a great setback for the vast anti-Muslim media empire. So, the media will never allow that to happen.

That unfortunately will mean Muslim bashing in the world may not end anytime soon unless North Korea attempts to fire a nuke at any western capital! The time has come to change the media focus/policy from the war on terror to the North Korean threat and the threat emanating from the Pacific and climate change that in reality pose grave danger to the west.

Also read: Every day Indian Muslims are being used as bait on social media to stir outrage