Skirting issues and presenting a false narrative won't bring about the much-needed change in our society.

I read your riveting open letter to the Delhi Police.

Of course, I found the statement of Delhi Police outrageous and damning; but that doesn't mean we counter it by presenting a false narrative of our society. Since we are both Manipuris, let me draw your attention to the things we pretend to "eat", but not really, at least in the Manipuri society.

1. We DON'T eat patriarchy. Maybe with growing social awareness, it is dwindling but unfortunately, it is still prevalent in our society. Our previous generation still prefer that a male child be the first-born in the family, no matter how euphoric they might at the birth of a girl child but there'll always be that yearning in their hearts for a male child. Yes, we don't sell our daughters with "dowry".

The term might be alien but our daughters are sent off to the groom's house with "gifts". Parents who can't afford struggle hard by taking loans so that they're able to provide with these "gifts" which range from the latest LED flat-screen, compulsory bed and furniture, fridge, washing machine and whatever else is trending in those days. If a bride doesn't bring a gift, she'll be mocked by the lovely aunties from the neighbourhood. 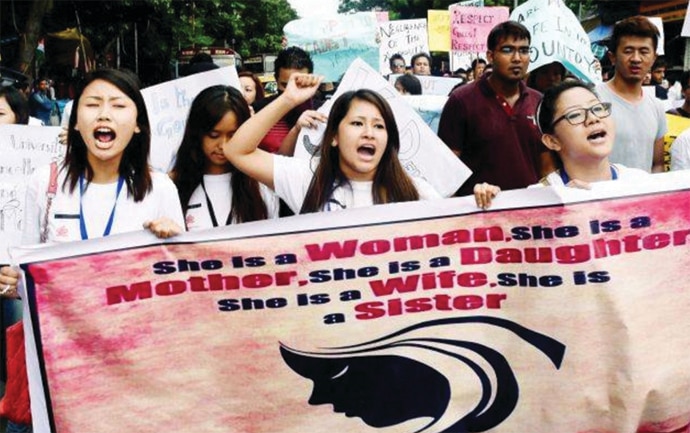 Students from Northeastern states protest against molestation on campus, at Visva-Bharati University.

Also read: Northeast as harsh for its women as Delhi, if not more

Therefore, her parents incur debts so that she isn't laughed at. Is it any different from dowry except for the fact that the demands aren't specified by the groom's family but has not it been pre-decided by the society? And let us not ignore the taboo associated with menstruation. Women can't cook for or eat with males of the household when she is on her period, anything she touches is considered impure so much so that she has to sleep separately from her husband. How is that not PATRIARCHY?

2. Maybe we eat forceful marriage but not entirely. Yes, arranged marriages aren't the norm; but let's not ignore the instances when a guy elopes with a girl without her consent. Of course, the elopement will be nullified by the elders by making the guy pay a ransom for stripping her off her "izzat". And hence, she won't be treated the same by all around.

3. We DON'T eat caste system at all. Maybe our version of caste system isn't the same as the varna system but we do have it. Majoritarianism condescending attitude towards the minorities be it the tribals or "Lois" is evident at all spheres.

We also don't give our children the complete liberty to marry whom they want if they come from different communities. Coming from a Meitei-Brahmin family, I can tell you first hand about how my aunt was ostracised for not marrying a Brahmin, the number of years my mother was NOT allowed to enter the kitchen for not being a Brahmin, or the hue and cry created by our relatives when my sister decided to marry a guy from Uttarakhand. The same treatment is seen wherever there is inter-community marriage - be it between Meitei and Tribal, Meitei and Nepali, Meitei and Loi, et al.

4. We DON'T eat moral policing. Our daughters are not allowed to venture out uninformed after dark, the general perception when a girl stays out after sunset is that she has ELOPED. They are not given the freedom to wear what they want once they are married. Many married women, who live in metros and wear jeans-skirts, change into "phanek" or "salwar-kameez" once they enter Manipur.

5. Of course, we would love to eat morons. Let's start with the ones within ourselves first.

I am sorry for breaking the mainland image of the so-called "liberal" Northeast, but I am tired of this facade. Skirting issues and presenting a false narrative won't bring about the much-needed change in our society. Our daughters should have a real chance at equality, which won't be possible unless we acknowledge our shortcomings. Yes, we are better on many fronts than mainland India and I could list them all (maybe I'll write a book) but I will end this letter by saying let us strive together for real change. And until then, we must continue shedding light on ignorance - be it the Delhi Police or the next-door neighbour.

#Women, #Manipur, #Delhi Police, #Northeast
The views and opinions expressed in this article are those of the authors and do not necessarily reflect the official policy or position of DailyO.in or the India Today Group. The writers are solely responsible for any claims arising out of the contents of this article.