Muddying the Brahmaputra: How both Congress and the BJP are using Assam NRC draft for their own political ends

As the Lok Sabha polls near and a 40 lakh population awaits its fate, it's clear that both the parties are riding an NRC tiger they can't dismount.

For some of us growing up in mofussil Assam, the writing on the wall wasn't always clear.

In hazy blue or red ink, plastered across the walls of small towns, there were messages mostly in Assamese and the occassional English. "Assam for the Assamese" or "Bengalis go back". For a newly formed All Assam Students Union, the point was often made. With violence.

The Ahomiya culture of the tropical state in the valley of the Brahmaputra was quickly being eroded by the foreigner. Including the Bengali, the Marwari and the all-pervasive Bangladeshi. The awe and the fear of the formidable AASU was palpable.

If AASU was violent, a decade later another force emerged. Bloody, ruthless and armed, the ULFA emerged as one of the most powerful insurgent groups of South Asia. The message coming from both: Clear Out.

As the foreigner was hounded out often at gunpoint, as enterprising businessmen, mostly Marwaris from Calcutta, fled, as tea estates witnessed flash strikes and day light murders of tea planters, the politician read the message, plastered in blood.

A solution was found. The Congress decided to dig its heels in. The Illegal Migrants (Determination by Tribunal) Act was enacted in 1983. The legislation thumbed its nose at all attempt at deportation. The onus was on the complainant to prove a person a foreigner. If a foreigner was detected, the police had no power to search and seize. The migrant managed to flee to another district.

The figures are telling. Over 300,000 migrants were deported from Assam alone between 1962-84. In the decade post-1983, Wikileaks quotes media sources as saying, that a mere 1500 were deported.

But brute force was met with more blood. Then Prime Minister Rajiv Gandhi signed the Assam Accord with the AASU. In a classic volte-face, the spirit of the Accord was diametrically opposed to the IMDT Act. Detection, deletion, deportation was the guiding light of the Accord. Predictably the Accord remained on paper.

The flip-flop of the ruling party of the day over Assam and its nativity continued. During the 2006 election, Wikileaks quotes then Congress President, Sonia Gandhi as saying "her party is committed to minority rights and has introduced the Foreigners' (Tribunals for Assam) Order 2006 under the Foreigners Act. This order will protect illegal Bangladeshi immigrants, making the process for identification of an illegal migrant and possible deportation, too difficult and time-consuming to implement". 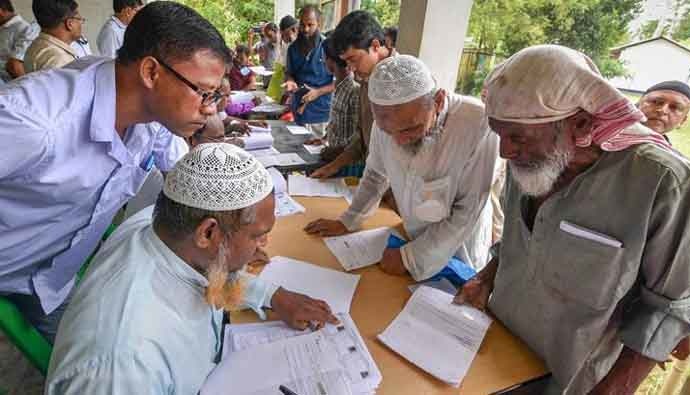 Cut to the monsoon session, 2018. The party speaks with a forked tongue. If Tarun Gogoi proudly owned up to the mess aka the NRC, calling it his brainchild, top leaders distanced themselves.

The only honest admission of what politicians were doing to Assam came from ex-Congress MP Kripa Chaliha. Wikileaks quotes Chaliha as saying, "Although Congress must publicly oppose the repeal, Chaliha agreed privately that the act was a detriment to security and that the government "can not be blind on infiltration."

On its part, the BJP finally woke up to smell the coffee in 2015. A marginal player in an exercise largely monitored by Justice Ranjan Gogoi of the Supreme Court, it did its bit to muddy the churn further. It sought to draw a wedge between the foreigner fleeing religious persecution, essentially minorities from Afghanistan, Pakistan and Bangladesh.

"There are reports that a number of Bangladeshi and Pakistani nationals belonging to minority communities in those countries, such as Hindus, Sikhs, Christians, Jains, Parsis and Buddhists, were compelled to seek shelter in India due to religious persecution or fear of religious persecution, " said a government released based on a 2015 MHA notification.

In other words, the BJP was fulfilling its election promise to the Hindu Bengalis of the Muslim majority districts of the Barak Valley. The 2015 notification was quickly followed up with an Amendment to the Citizenship Act, 2016.

It matters little that a Sarabanand Sonowal, then of the AGP, successfully challenged the IMDT Act in the SC in his bid to throw out all foreigners. The 2016 amendment has ironically not worked. The balance has tilted against the BJP. Sonowal is fast losing ground as people view the Citizenship Act as being diametrically opposed to the Assam Accord.

The Congress finds itself between a rock and a hard place. It has always stood with the migrant but stands to lose the native Assamese vote if it publicly supports the NRC. The AUDF is meanwhile eating away at its traditional Bangladeshi migrant vote bank.

Significantly, it is an Assamese Muslim who is at the forefront of the NRC petition in the Supreme Court. The Assamese, whether Ahomiya or Muslim or Hindu wants Assam for the Assamese.

Now, as the Lok Sabha polls near and a 40 lakh population awaits its fate, it's clear that both the Congress and the BJP are riding an NRC tiger they can't dismount. The question is can both read the writing on the wall finally.

Post your comment
#Bangladeshi immigrant, #Muslim, #Congress, #BJP
The views and opinions expressed in this article are those of the authors and do not necessarily reflect the official policy or position of DailyO.in or the India Today Group. The writers are solely responsible for any claims arising out of the contents of this article.