The release of the National Register of Citizens (NRC) has opened a Pandora's box of troubles for the state of Assam. The entire process of the inclusion of names on the basis of a legacy or a family has thrown up a few loopholes too.

Ward no 4 has a total population of about 2000 people out of which there are approximately 500 Hindus and the rest are Muslims. But the names of more than 95 per cent Hindus figured in both the lists - not even 50 per Muslims figure till now. The number of such cases reflects the situation and raises eyebrows.

Case 1: 64-year-old Abdul Latif is extremely annoyed. He says, "We are six brothers and five of us have been listed in NRC... now my son and I are not on the list... I don't know how that is possible despite submitting all documents... who will answer this.. have I been left out because of my name, surname or community. I feel that they are now doing it with mala fide intentions. I want my name also in the NRC...I deserve it."

He is not the only one annoyed. Many have been left out of the second list too and are clueless as to why.

Case 2: Clad in a purple kurta, Abdul Salam is unable to understand the reason behind striking away names.

He said, "I am a Thanaghora village resident... most of the names of the Hindu families have been listed in the two drafts released till now... but the names of Muslim families are still not there... we now feel that this has been done intentionally with a particular motive. Families are waiting to solve this jumble of words of the NRC status. All documents were given... and they said it is ok... then what is the problem in putting our names on the list."

The rest of the 10 wards in the entire Gram Panchayat are mostly composed of Hindus. But in ward no 4, it is quite the opposite.

More than 400 Muslim names out of 2000 have not made it to the list, despite relatives being a part of the same family tree.

Case 3: Mohd Miraz Ali said, "Now there are around a thousand people in our village... there are some families that may have some problems but there are many families where members have been missed out or they have not been included in the NRC draft till now. My wife did not get the NRC... but all other family members got it. Now I am worried and angered. This will lead to more problems."

But his concern is beyond just inclusion or exclusion. It is about the intent of the authorities in the process.

Ali questioned, "We are Muslim families... now many are raising questions and fear that out of vested interests and jealousy, our names are being struck out. How is it possible that out of ten, eight are NRC holders and two are left out? "

He has a problem in his family itself as his daughter's name has not been included till now. He said, "I had filled up the NRC and all the records are in place... my daughter's name was not included in the second list also... we have submitted all documents but no response till now. I am clueless... what is the problem... I have given school ceritificates... if I am a citizen now, then why not she?"

Case 4: His daughter Ayesha is now worried about how she will apply for a job, given her name missing in the NRC list. "All my family members have their names in the list... I don't know why my name has not been included. What is the reason for leaving me out... I need this for applying for both higher studies and jobs."

Case 5: Similarly, Shajida Khatoon in her 30s is at her wits' end to understand why her name is not in the second draft - even after being on the first list. Her husband, Jamir Hussain, is a valid citizen and so is her son, but she is not. "My name was in the first draft but not in the second draft. My husband's name was not there but now my husband and son's names are there. We are five members but only three have their names on the NRC list now." 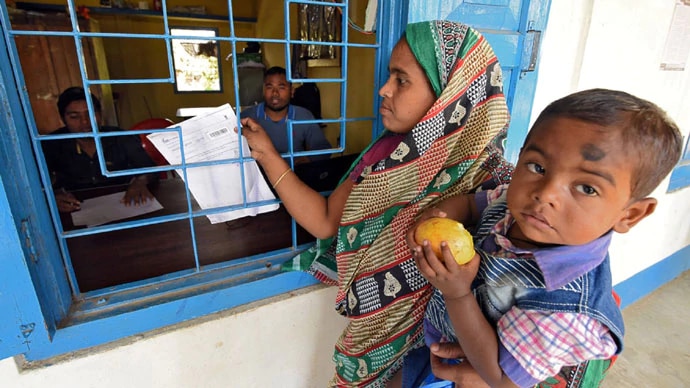 Case 6: Iman Hussain has a similar story to tell.

We travelled to the residence of Hindu families to speak about the stress, but found them comparatively relaxed, even playing carrom post-the two NRC lists.

Case 7: Most of the people in this area are Hindu and all names were there in the 1st list, so there was no need to apply in the second list.

Case 8: Dipali Deka too sounded fairly relaxed, "The names of all people on the list was there. The families had submitted all documents and had got the names in the list."

Case 9: Such serenity aside, there is also anger raging and so is deep politics with a storm brewing over Assam in Parliament too. Just as 34-year-old Moyna pours her heart out, she also voices her hidden fears. "I was assured that my NRC documents are complete and I will soon find my name in the list. There are family members who have been missed out. I don't understand if they have not included me because I am a Muslim."

The Apex court has asked for a detailed submission from the NRC authorities on the next course of action and this would be the toughest challenge – to face the land's highest court with a final and fair solution.