How India should respond to Imran Khan’s nuclear threats

A Balakot 2.0 cannot be ruled out.

Even as Prime Minister Narendra Modi wraps up his bilateral meeting with Russian President Vladimir Putin in Vladivostok, there are whispers in the corridors of Islamabad that Pakistani Prime Minister Imran Khan is fast losing the confidence of the Rawalpindi generals who engineered his election to power. 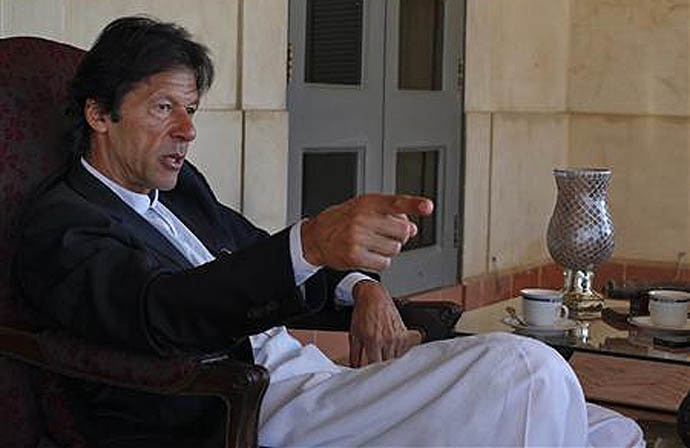 The Fifth Eastern Economic Forum in Vladivostok, where Modi was the special guest, demonstrated India’s strategic thrust in the region. Meanwhile, by unilaterally postponing a boundary negotiation meeting scheduled for September 9-10 between China’s powerful state councillor Wang Yi and Indian National Security Advisor Ajit Doval, India sent Beijing a clear message that China’s unalloyed support for Pakistan would not come without a cost.

In Pakistan, when the chips are down, the generals in Rawalpindi play the nuclear card. Imran Khan went by the Rawalpindi playbook, threatening a nuclear conflagration that would not be confined to the subcontinent. A discreet phone call from Washington made Khan back down. Speaking to a gathering of Sikh religious leaders in Lahore earlier this week, Khan was forced to say: “There will be no first use of nuclear weapons from our side, ever.”

Snubbed globally as he tried to ratchet up pressure on India over the revocation of J&K’s special status, Khan phoned Saudi Arabia’s crown prince Mohammed bin Salman thrice over the past three weeks to persuade him to send his foreign minister Adel bin Ahmed Al-Jubeir to Islamabad on the same aircraft as the UAE’s foreign minister Sheikh Abdullah bin Zayed bin Sultan al-Nahyan in a paranoid show of solidarity.

There are three reasons why the rhetoric tumbling out of Islamabad in inchoate bits and pieces is still so shrill. The first, of course, is the overwhelming approval by both houses of Indian Parliament of the revocation of J&K’s special status. This has struck a dagger at the heart of Pakistan’s claim on J&K.

The second reason behind Islamabad’s meltdown is India’s new conditionality: The only issue left on the table for discussion is Pakistan occupied Kashmir (PoK). That has incensed Rawalpindi. For 70 years, the “core Kashmir dispute” was predicated on Islamabad’s narrative of reclaiming the whole of J&K from India. Now it has been brusquely told by the Indian government to forget about that. “When,” asked one Indian Union minister tauntingly, “was J&K ever a part of Pakistan?”

PoK, the only issue

The focus now is on PoK. This is dangerous territory for Pakistan. PoK is a vast underdeveloped wasteland. Its inhabitants are angry that large parcels of their land have been “stolen” by Pakistani Army officers who have accurately been described as property dealers rather than military officers. Focus on PoK will also draw attention to how Pakistan carved out Gilgit-Baltistan from J&K and ceded parts of trans-Karakoram near Siachen to China. These are the real depredations on the Kashmiri people — not India integrating J&K into the mainstream by invalidating provisions in Article 370 which kept Kashmir socially and economically isolated for 70 years. The third reason that has unnerved Pakistan is the subtle shift in India’s nuclear doctrine from no-first-use to possible-first-use.

The last thing the generals in Rawalpindi want is war, nuclear or conventional. As an Indian Army officer said, “In the event of a nuclear conflict, India will lose two cities. Pakistan will be wiped off the face of the earth.”

Washington has drummed that message into Khan though ministers in his Cabinet continue to brandish the nuclear “option”.

According to a report in the Russian media, “Pakistan’s railways minister Sheikh Rashid Ahmed this week warned India of area-specific nuclear attacks with a series of minute atomic bombs. The minister went on to schedule the time for the war, arguing the appropriate time for a ‘final freedom struggle has come’, and that the war with India would be the ‘last this time’. Rashid Ahmed claimed that Pakistan has 125-250-gram nuclear bombs at its disposal, which can hit and destroy whatever targets Pakistan were to pinpoint.”

Imran Khan’s mixture of threats of war directed at India and pleas directed at the rest of the world to intervene to avert a global catastrophe have been met with a shrug — even from China and the Islamic world. What India must guard against, however, are the only two destructive actions Pakistan’s Army can take one month after J&K’s changed status rewrote the region’s strategic paradigm.

One, Islamabad will fuel violent local unrest in the Kashmir Valley when restrictions on movement and communications are fully lifted. And two, Pakistani-trained terrorists will launch a major attack in J&K or other parts of India in the hope that it sparks Indian military retaliation and international intervention.

A Balakot 2.0 would be India’s response, striking deep into PoK, the only issue that awaits resolution in J&K.

Post your comment
#Article 370, #Pakistan, #Imran Khan, #Nuclear Threat
The views and opinions expressed in this article are those of the authors and do not necessarily reflect the official policy or position of DailyO.in or the India Today Group. The writers are solely responsible for any claims arising out of the contents of this article.