Why is India’s super-rich 1% upset with giving the poorest 20% some NYAY?

Distinguished members of India Inc. are flustered by NYAY because they feel the scheme is robbing Peter to pay Paul. Given India's backdrop of crony capitalism, NPAs et al, this is richly ironic. And utterly unfeeling.

A tweet by a celebrity big business gentleman on Sunday (March 31) morning accumulated large traction, with several finding his parable of the 'lion and the sheep' allegory — to depict exaggerated promises — funny.

However, it was not funny.

The mogul had taken a sardonic dig at Congress President Rahul Gandhi’s NYAY (Nyuntum Ayay Yojana) scheme — also known as Minimum Income Guarantee. The scheme is a watershed as it intends to cover five crore households (approximately 25 crore individuals) — about 20% of Indians who struggle to eke out an existence on less than sustainable means on a current estimated average income of just Rs 6,000.

By assuring them of a direct unconditional cash transfer of Rs 6,000 per month, NYAY becomes the most ambitious social security scheme ever.

It is revolutionary in impact, and yes — totally unprecedented in scale.

At Rs 72,000 per annum, it marks an extraordinary breakthrough as it pushes up the basic minimum income to Rs 1,44,000 — over and above existing income/subsidies. Previous efforts have had smaller budgets and limited constituencies. For instance, the BJP’s PM-Kisan Yojana, which provides an embarrassingly paltry amount of Rs 6,000 per year to beleaguered farmers. That, as I see it, is almost a laughable travesty. NYAY corrects the in-built institutional bias that is the hard reality of our annual budgetary carnival, where the big thrill is how the bulls and bears will react to the Finance Minister’s offerings. Who cares for the poor suffering individual — an Indian surviving on a precipitous edge — whose only defining introduction is a BPL (Below the Poverty Line) card?

So, why are some distinguished members of India Inc. feeling profusely flustered by NYAY — whose potential outlay is about Rs 3,60,000 crore of our annual budgets, or 1.9% of our Gross Domestic Product (GDP)? This is because, in their Alice in Wonderland existence, NYAY is apparently robbing Peter to pay Paul.

If there is a corporate tax rate cut, that is treated as “essential for growth”, but if there is welfare expenditure incurred, it is dismissed with contemptuous disdain as a wasted “dole”. They have branded it as “povertarian economics” — a term that has no compunctions about being insufferably derisive about the poor.

In my opinion, this is crude hypocrisy and total double standards.

It is time to expose this elite snobbishness that has the blessings of sections of mainstream media as well. Ironically, it is crony capitalists who have gamed the ecosystem to gradually and imperceptibly have a stranglehold on government finances and have seen their wealth grow manifold. Governments come and go — but they remain the stationary bandits in bespoke suits who wield disproportionate influence on policy-making.

India’s well-named 'Billionaire raj' are adding Rs 2,200 crore to their wealth every day — this explains the worsening income inequalities in India.

As the gargantuan, in-your-face Rafale deal has demonstrated, crony capitalists have even entered sensitive businesses that have national security ramifications, in my view, by allegedly establishing political proximities.

The affluent First Class cabin rich or the private jet owners (top one per cent) experienced income growth of 39%, while the bottom half grew by 3% during the preceding year.

At this rate, we will become dangerously polarised on the economic front at two extreme ends and that can have deleterious consequences for society. The poorest 10% of Indians have lived in debt since 2004, while India will add about 70 new millionaires in USD terms every day between 2018-2022. 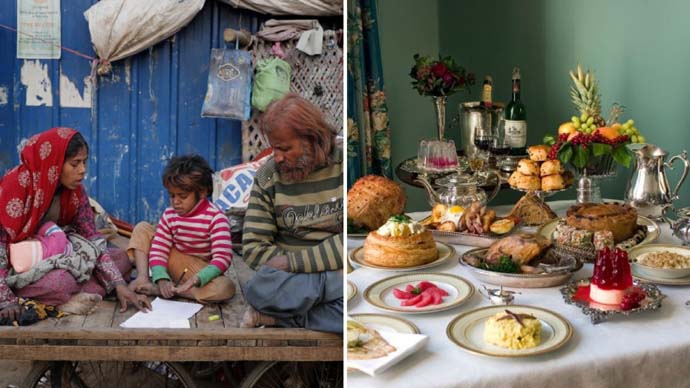 Where's the NYAY? Two sharply separate worlds. One of deprivation and want. The other, of all the good things of life. (Representational image: DailyO)

Growth is good and we welcome new millionaires and billionaires — but why are these globetrotting, loaded types so paranoid of the poor?

Why does India Inc. appear so blissfully ignorant of their own country’s raging problems? It appears that many shareholder values are more important than serious societal concerns. Don’t forget that had there not been an official government fiat making Corporate Social Responsibility (CSR) mandatory, most would have bought more destination beaches abroad and constructed skyscrapers with helipads atop.

India is thus a country of the haves, have nots — and the have-yachts.

There are schisms, and they show. They showed in the heartless tweet.

Meanwhile, the biggest threat to the modern democratic order is the increasing infringement of the political process by the powerful capitalist lobby through campaign finance. Have you heard a single voice from India Inc (many boast of Ivy League educations and talk interminably on corporate governance) criticise the electoral bond scheme of the Modi Sarkar that makes donor identity anonymous — thus seemingly legitimising quid pro quo deals and slush money transfers?

Not one. There is a deafening silence.

But NYAY is opening up their vocal chords.

I am being charitable in calling them pusillanimous — the fact is they are all crawling, wearing their priceless Savile Row suits. Yes, Savile Row does the best suits in the world. But does it also make stuffed shirts? (Representational image: Reuters)

Prime Minister Narendra Modi has been given a whole list of wilful defaulters of bank loans reportedly by former RBI Governor Raghuram Rajan. They have not been publicly disclosed. The public sector banks Non-Performing Assets (NPAs) have apparently crossed over Rs 11 lakh crore, but that is perfectly fine. Corporate debt write-offs have happened reportedly to the tune of Rs 3,20,000 crore but that is also kosher.

But when an egalitarian political party talks of allocating 2% of India’s GDP for 20% those who suffer from hunger pangs, that causes a stomach disorder to those conditioned to champagne, caviar and cigars. The irony there, as they say, dies a billion deaths.

Rahul Gandhi is right — the election of 2019 is a battle for the soul of India. But what do you do with those who are soulless?