Today, 1984's traumatic Operation Blue Star appears water under the bridge for Delhi's Sikh elite. Why has such a different impression of the event, which scarred Punjab back then, emerged?

In 1939, the sixth anniversary of his rise to power, Adolf Hitler prophesised that all European Jews would be annihilated in the event of a world war. "If the international Jewish financiers, inside and outside Europe, succeed in plunging the nations once more into a world war," the Führer told the Reichstag, "then the result will not be the Bolshevisation of the earth, and thus the victory of Jewry, but the annihilation of the Jewish race in Europe!'

Yet, when the Nazis slaughtered six million Jews, thousands of soldiers of Jewish descent fought for Hitler's Third Reich in World War II.

"The Nazis allowed these men to serve but at the same time exterminated their families," American writer Bryan Rigg told the Los Angeles Times in 1996. Rigg, 25 then, had documented the Jewish ancestry of more than 1,200 of Hitler's soldiers. Soldiers of Jewish heritage were awarded the Knight's Cross, Germany's highest military honour, in about 20 cases, the LA Times quoted him saying.

But the veterans he met with encountered a challenging question: Were they villains because they fought for Hitler — or victims because their parents died in Nazi concentration camps?

Thirty-five years after Operation Blue Star — when military tanks pounded the Akal Takht facing the Darbar Sahib (Golden Temple) — I found members of the Sikh elite in similar duality over the invasion that had lacerated the Sikh soul in June, 1984.

This duality could have been persistent for years, but I noticed it first in 2018 and again, in 2019 when the Sikh Forum, a prestigious non-profit institution linked to someone as towering as the late Lt-Gen Jagjit Singh Aurora, invited me to attend their annual commemorative events on the OBS anniversary.

A panel of celebrated Sikh veterans, socialites and scholars proudly released the third edition of a book titled Blue Star Over Amritsar — the Real Story of June 1984, written by a woman Sikh author and distributed by Amritsar's Singh Brothers. Reading is unfortunately not so common among the common Sikh masses.

In a profession that requires vast research, I do turn to books though in order to enrich my understanding.

I went through this new avatar of Blue Star over Amritsar. A book of contentions: Its analysis of one of the stormiest military ops in India raises further debate. (Corporate Vision; Photo: Twitter)

In the chapter titled The Invasion, the book portrayed a situation that the state had no other option but to launch an army operation to flush heavily armed “terrorists” out of the Darbar Sahib complex. At times, a reader is given a visual experience of the battle largely from the lens of military. Words like "fundamentalist", "extremist", "terrorists", "gangsters" are thrown in like popcorn.

The Invasion is essentially the operative part of Blue Star Over Amritsar. But the main action is largely a collection of army versions from various interviews that seek to legitimise the raid.

A chapter titled A Saint in Arms follows next in what is a reference to militant leader Jarnail Singh Bhindranwale. His passage can be summed up thus: 'The main culprit behind Operation Blue Star' was Sikh fundamentalism mishandled largely by top Sikh politicians.

But that's not all to it.

Woven into this chapter, which moves incoherently in its anecdotes about Bhindranwale, is a narrative that Indira Gandhi and her successors had simultaneously floated to denigrate the Sikhs of Punjab. This startling insinuation on page 81 in the book caught my attention: "But the loss of these followers was more than made up. Since the Sant's (Bhindranwale's) camp was an open house, former Naxalites, anti-social elements, smugglers like Harminder Singh Sandhu's brother, Upkar Singh, and fugitives from the law, disgruntled civil and military officers and victims of police atrocities all began to rally around him. It was, therefore, not surprising that smuggling operations were being carried out openly and dacoities were planned from within the precincts of the temple complex."

Writers are very much within their rights to express their thoughts.

But I wondered how a representative organisation of the Sikh elite, which ostensibly has been seeking answers to the unanswered questions around Operation Blue Star since 1984, could officially release a perspective that the rest of the community, the Akal Takht included, does not subscribe to.

The book also carried allusions that might be offensive to Sikh religious sensibilities.

When contradictions were brought to the notice of the Sikh Forum, it acknowledged none of its members had read the book before releasing it. It admitted that the views were solely those of the author.

But a year later, in 2019, the same author was again projected as a panellist on the Sikh Forum's podium marking the Operation Blue Star anniversary.

With a theme on drugs and disappearances in Punjab, the elite Sikh organisation wore another paradox on its sleeve. It showcased a relative and a vocal supporter of the late KPS Gill as another panellist. Remember, the "Super Cop", as Gill was hailed by the hard-hitters of the Indian state, had himself been accused of extra-judicial methods as Punjab's police chief. It's always been contested: Some have described Indira Gandhi's decision as the finale of several calculative steps. (Photo: India Today)

But intellectual perspectives varied at the height of unrest in the state — back then, the intelligentsia, Sikh, non-Sikh, Indian and non-Indian alike, described Indira Gandhi's military attack on the Golden Temple as a calculated move aimed not at insurgency but at a culture. “The army went into (the) Darbar Sahib not to eliminate a political figure or a political movement but to suppress the culture of a people, to attack their heart, to strike a blow at their spirit and self-confidence,” a piece in the HuffPost quoted anthropologist Joyce Pettigrew, an author and an expert on the Punjab trouble.

Legendary writer Khushwant Singh returned his Padma Bhushan in protest against Operation Blue Star. ''Only a minuscule proportion of Sikhs subscribed to Khalistan before the temple (Darbar Sahib) was stormed,” he told the New York Times in 1984. "I wanted to find one and talk to one, but I couldn't.'' 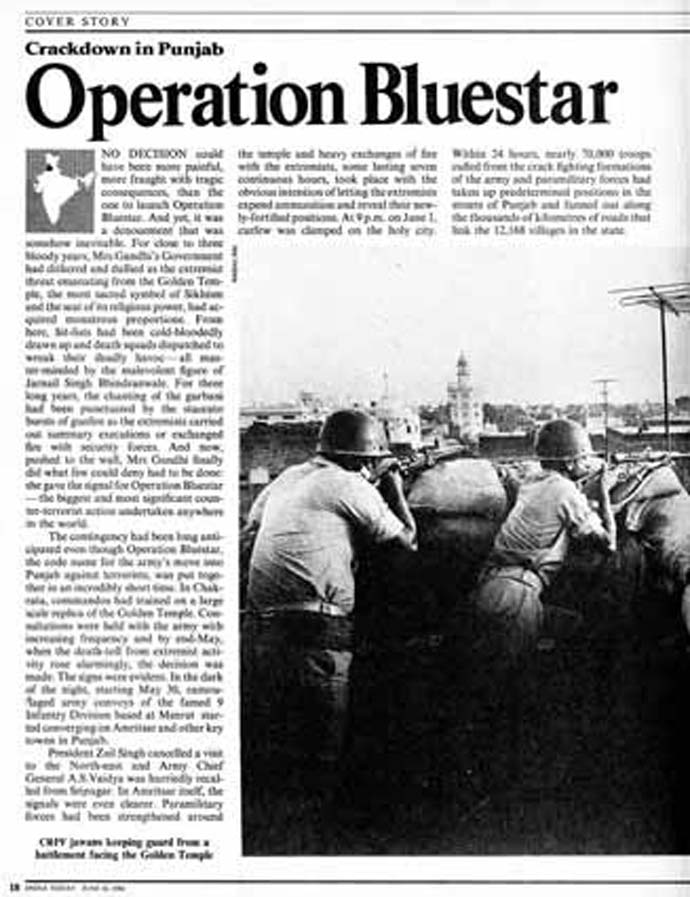 Much more than meets the eye: Some say that Indira Gandhi apparently ignored Bhindranwale's offers of a compromise. (Photo: India Today)

Columnist Rajinder Puri insisted Indira Gandhi ignored Bhindranwale's offers of compromise. "Was an avoidable Operation Blue Star undertaken to serve national interest, or some foreign interest?" he asked in a 2007 piece in Outlook. "It was avoidable because this scribe, on Rajiv Gandhi’s request, had obtained from Jarnail Singh Bhindranwale an acceptable compromise one month before the operation. The offer of compromise was ignored."

Cut to 2019, Operation Blue Star appears to be water under the bridge for members of Delhi's Sikh elite. But then, they should be open about it.

Commemorating OBS anniversaries on the back of third-party proponents of Gandhi's or Gill's iron-fisted policy sends out conflicting signals. It's like having your cake and eating it too.

Also read: Why the Kartarpur Corridor could revive the Khalistani movement

#Indira Gandhi, #Golden temple, #Operation blue star
The views and opinions expressed in this article are those of the authors and do not necessarily reflect the official policy or position of DailyO.in or the India Today Group. The writers are solely responsible for any claims arising out of the contents of this article.