BJP knows it can’t form a government in Karnataka: This is what Modi-Shah actually want to tell voters

The Karnataka conundrum is being drummed up at a time when the prospect of a 'khichdi sarkar' is beginning to look real post-general elections.

People in drought-hit Karnataka are angry.

They are angry because at a time 23 of the 30 districts in the state are suffering because of deficit rainfall in the monsoon, the 224 MLAs supposed to be working to bail people out of the crisis are spending time in luxury hotels and resorts instead, locked in a bitter power struggle that has thrown constitutional morality to the winds. The newly elected MLAs in the Karnataka Assembly. They are to be seen more often in five-star resorts though. (Source: PTI)

The problem came to the fore when senior Congress leader and minister DK Shivakumar claimed that the BJP was poaching MLAs of the ruling combine — the Janata Dal (Secular) and Congress — with the intent to topple the government.

While the BJP too levelled similar counter-allegations against the ruling combine, it is being speculated that the party is attempting a coup in the state right ahead of the Lok Sabha elections to firm up its base in the southern Indian region.

A close analysis of the numbers punctures this theory. The BJP falls short of the majority figure by nine MLAs — with the stringent anti-defection law in place, the BJP cannot welcome JD(S) or Congress MLAs to its fold. If a government was to be formed in this way, it won't be able to stand legal scrutiny.

Now, the other possibility for the BJP to stake claim to form a government in Karnataka is to affect a vertical split in either the JD(S) or the Congress. While this could have been a possibility in some other situation, with the general elections round the corner, this is unlikely to happen.

So, what is the BJP actually trying to do by creating this confusion in Karnataka?

Well, the party is trying to underline not just to voters in Karnataka, but across the country, that a coalition government is ridden with inherent instability because there are always chances of governments being toppled.

So, what happens when there is instability?

Exactly what is happening in Karnataka — parties including those mandated to govern spend their time only trying to keep their flocks together. 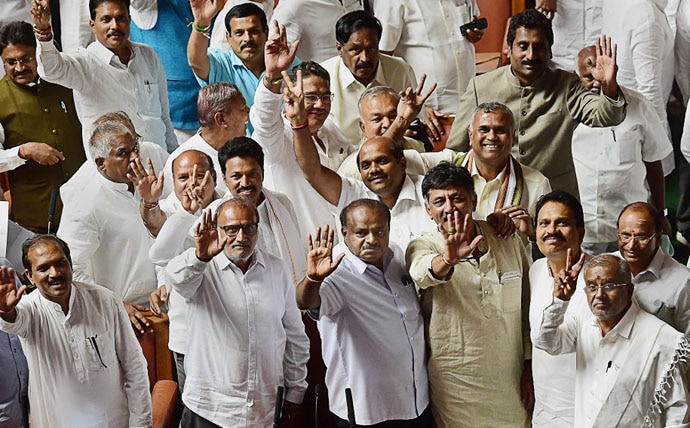 The challenge now for both the JD(S)-Congress combine and the BJP is to keep their flock together. (Source: PTI)

India saw a prolonged period of coalition governments through much of the 1990s and then till 2014.

This was also a reason India had started rooting for a decisive leader — but leaders can only be as decisive as their mandates.

The rest is a farce.

Come 2016, a single sweep of Rs 500 and Rs 1,000 notes being outlawed suddenly made people wary of what 'decisive' mandates could do, preparing the ground for people to look at other options, including 'khichdi' governments. It was the demonetisation announcement which, for the first time, made people realise the possible perils of a 'brute majority'. (Source: Reuters)

The Karnataka conundrum is thus being drummed up at a time when regional parties from across India are devising strategies to be in the best bargaining position, post the announcement of the general election results.

The era of coalition politics gave India many accidental Prime Ministers — none managed to complete a term. The fall of governments meant early elections and thus added to the burden on the exchequer, which is nothing but an euphemism for taxpayers’ money. The instability percolated down to society which felt the burden of unease and lack of surety about where crucial matters were headed.

The point the BJP is trying to underline now is that unnatural alliances fall under their own weight.

This message helps the party make the 2019 contest a two-way war between the BJP and the Congress rather than one open to all forms of combinations — with the PM’s chair up for grabs to the highest bidder.

Will the message be taken?

Also read: Operation Lotus redux: Why BJP is so desperate to regain Karnataka

Post your comment
#Coalition politics, #Narendra Modi, #Karnataka politics, #Operation lotus
The views and opinions expressed in this article are those of the authors and do not necessarily reflect the official policy or position of DailyO.in or the India Today Group. The writers are solely responsible for any claims arising out of the contents of this article.