Presenting a riveting excerpt from Captain MNR Samant and Sandeep Unnithan's thrilling account of the war that made Bangladesh and India's secret naval service that swung the war.

The book gives you a glimpse into the less-talked-about naval operation behind the 1971 war between India and Pakistan that led to the birth of Bangladesh.

This is one of India’s largest clandestine — and most successful — military operations. 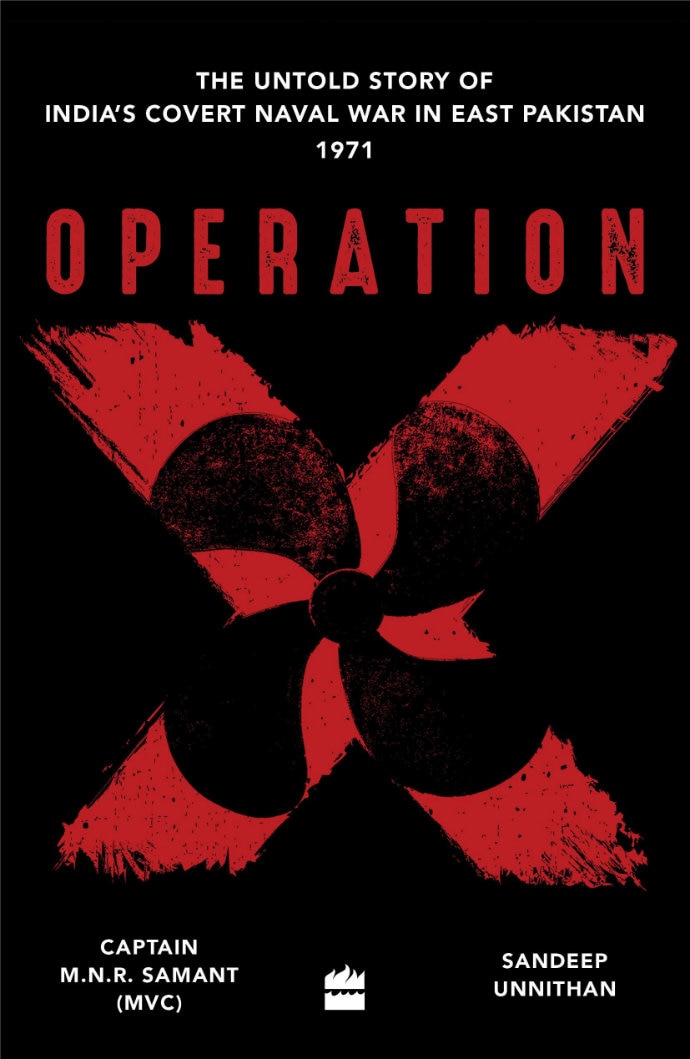 It was May 1971, and the human flood from Bangla Desh continued unabated. Over three million refugees poured in to occupy open spaces in West Bengal, its villages, towns and cities. Hundreds of tents lined the roadsides, even the ones leading to camp C2P in Plassey. In the heart of Calcutta, the camps were filthy, the sight of dead bodies was common, and there was the overpowering stench of human excrement. Aid workers thrust packets of dried milk and biscuits and clothes into forests of human hands.

That month, both India and Pakistan had begun arming and training civilians on both sides of the border. The Pakistan Army was training and raising a force of civilian collaborators to tighten its grip on the rebellious province. On 28 May, Governor-General Tikka Khan promulgated the East Pakistan Razakar Ordinance, which sanctioned the raising of razakars to augment the army. Around 50,000 volunteers — drawn mostly from the Urdu-speaking pro-Pakistani Bihari Muslims, Bengalis, and the Islamist Jamaat-i-Islami political party — were trained and equipped by the Pakistan Army. 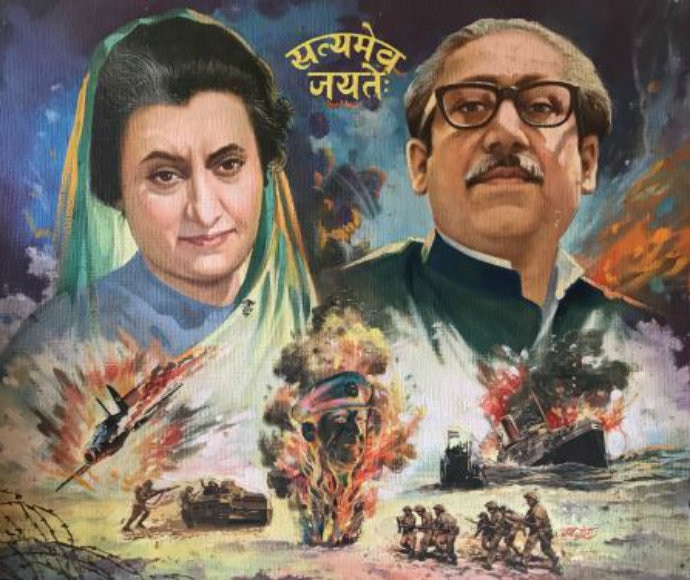 It was a ferocious battle and resulted in a new nation being born. (Photo: Publisher)

In one camp in Juliet Sector in the north-eastern Indian state of Meghalaya, Lieutenant ‘Delta’, an officer from an infantry battalion, was training the first batch of Bengali refugees to lob grenades, lay ambushes and fire weapons used by the Pakistan Army — .303 bolt action rifles, German G3 rifles and Chinese Type 56 self-loading rifles. The lieutenant had earlier been posted at Sikkim’s Doka La plateau as the army kept watch over a possible incursion route if the PLA decided to roll down from the Tibetan plateau down through the Chumbi Valley to aid East Pakistan. That month, he and dozens of army officers qualified as instructors in small arms and commando courses were vacuumed up by the Indian Army as training officers. In the camp, Mukti Bahini volunteers aged between seventeen and forty years were divided into five groups of ten each, and lived in thatch- and tin-roof dwellings. The lieutenant would, over the next three months, turn nearly 250 Bengali civilians into guerrillas and inculcate in them confidence and a fighting spirit.

Hundreds of miles away, Palashi’s villagers had by now got used to the sight of bare-bodied Bengali youth running and swimming near the sugarcane fields, the occasional boom of explosives, and the rattle of sub-machine guns. The camp, they reasoned, was no different from the dozens of Mukti Bahini camps along the border, about which word had started to spread. But just who was training them was never clear. From a distance, the trainers were indistinguishable from their trainees.

Inside C2P, however, things were different. The X-men had quickly become legends, the three officers Martis, Das and Kapil supervising and stepping in only when things got out of hand. The physically imposing Karan Singh whose drill-sergeant–like voice barking out commands rang in the ears of his trainees long after the day’s end. The short and ripped close-combat trainer Havildar Mane — affectionately called ‘Nanabuz’ by his recruits — who could never be thrown off his feet. Lt Samir Das, who effortlessly explained diving terminology to them in Bengali, was the star footballer during games sessions.

The camp pushed the college student trainees to their physical limits and, when they were finally proficient long-distance swimmers after several weeks, the X-men finally introduced them to the last lesson – camouflaged swimming — the art of stealthily navigating to their targets in the water without exposing themselves. Trainees slipped on their fins and tied two bricks to their stomachs with a cloth towel to simulate the weight of a limpet mine. They had to swim to their targets downstream and backwards, propelled only by their fins. It was the stealthiest way to manoeuvre a three-kg limpet mine on their stomach to the target. Intensive training. Fierce focus. And all in secret. (Photo: Publisher)

That month, the limpet mines began arriving at the camp. The first ones were dummies — inert rounds minus explosives, but as heavy, to give recruits a feel of the real weapon and its components. Training was rigorous and tempers were frayed. Arguments sometimes exploded into fisticuffs. Kapil separated one such bout between two trainees who seemed intent on killing each other. ‘It’s good to fight, but remember, your enemy is someone else, you’ve got to learn to fight them.’

On another occasion, Kapil noticed a Mukti Bahini trainee fumbling with the practice mines and took him aside to ask why. Atharuddin Talukdar confessed he suffered from acute long-sightedness. The Dacca University student had lost his glasses in the melee of fleeing Bangla Desh. He had hidden this fact from his recruiters and from C2P authorities when he reported at the camp in late June. Kapil sent him off to Krishnanagar to get a prescription and a new pair of glasses. On his return, Talukdar was an unusual sight in C2P. His thick, black-framed spectacles made him stand apart.

Recruits could leave the camp only in unusual circumstances like Talukdar’s. Two ‘welfare officers’ set up tent inside the camp as soon as C2P had begun training. These were Bengali-speaking operatives from the State Intelligence Bureau, the IB’s local unit, tasked with keeping a tab on the training and to ensure no spies infiltrated the camp.

NCO(X)’s strategists had envisioned the naval commando war as a ‘build to last’ campaign like the Vietnam War. If the early batches of commandos were either killed or captured, as they feared, more would have to take their place. The operation thus needed a steady assembly line of recruits. Nanda, in all his visits to the camp, asked his officers to ‘think big’ and authorized an expansion of recruits. These were the same sentiments he expressed when the defence ministry frowned upon the construction of the lavish WNC mess for officers in Bombay — Kapil’s den — in the late 1960s. ‘We will build it only once; let’s do a good job of it,’ he reportedly said.

Kapil and Das had established an efficient recruitment system. Light-weight units would visit refugee camps to select youth based on rigorous criteria — aptitude, swimming skills, educational background and dedication to the cause. This process became the camp’s recruitment blueprint. After doing the initial groundwork, both the officers concentrated on training and work-up, while senior CD sailors were sent for recruitments under a specialist recruiter whom Samant brought into the operation in June. Surgeon Lt Commander A. Abraham, a medical officer and submarine specialist screened volunteers for the navy’s submarine arm. Operating out of Samant’s office for a month in Fort William, he visited youth camps in various sectors to select and screen volunteers for the operation. The surgeon toured the border camps to personally select 150 naval commando volunteers.

Meanwhile, the soluble plug in the limpet mine was proving to be a four-inch-long problem that evaded a solution. Thirty minutes was way too short a time for mission success — a diver could be in the water for nearly an hour. And then, one night, over drinks at the camp, one of the exasperated X-men shouted, ‘Why not slip a condom on the damn thing?’ Yes, why not? There was laughter.

But then, a few days later, they actually did it. A condom was procured from a local medical shop, wrapped around the soluble plug and lowered into the water. It sat there undisturbed. It had worked — a solution so simple, they wondered why the answer had evaded them for so long.

A standard operating procedure was drawn up. An assault swimmer would roll the condom over the soluble plug before he swam to the target vessel. Once he reached the shipside, he would peel the condom away and stick the limpet mine on the side of the target. He now had thirty minutes to swim to safety.

In Fort William, Samant raised an eyebrow over Lt Cdr Martis’s indent for a large supply of condoms until a guffawing Martis assured him: ‘Sir, it’s not for what you are thinking!’ The X-men were far from home and incommunicado. Their absence was not unusual because naval families were used to their kin sailing for weeks and months on overseas deployments.

From vessels to warriors, the Indian Navy took on the 1971 challenge with great panache. (Photo: Publisher)

Letters were written home, but personnel were specifically asked not to reveal where they were based. The mail was despatched to the 2 Sikh LI camp, from where they passed through military censors before reaching the family. They could not reveal, for instance, that the camp had no electricity or running water. Shaves and haircuts were unheard of luxuries. The men marked their time by the length of their hair. The clouds of mosquitos that descended on the camp could be kept at bay only by applying a foul-smelling military-issue ointment that came in thumb-sized bottles.

C2P thus functioned as an island of military intrigue amidst nature. Nightfall only accentuated the camp’s solitude. The deathly stillness was only interrupted by stridulating crickets, the bark of village dogs and the distant gurgle of the Bhagirathi.

There were no radios, no newspapers and no entertainment. The exhausted trainees fell asleep almost as soon as they hit the floor of their tent, some using their plates as pillows. A few sat up at night talking amongst themselves and occasionally sang Bengali folk songs.

A few tents away, the X-men sat down together on evenings for their dose of military-issue rum. The tent was lit by a hissing kerosene lamp, the night-sky stretched above them like a diamond-strewn black carpet.

‘Saab,’ Maninder Singh said as he sat cross-legged on the sheet on the ground, cupping his hands around his glass — basically meant for tea — of rum. ‘Mujhe naik banwa do...’ (Please give me the rank of a naik.)

‘Kya karega naik ban ke?’ (What’ll you do with that title?) Martis asked.

‘Roti chadd jayegi!’ (I won’t have to make rotis) It took guts, glory and some secrecy. (Photo: Publisher)