Pakistan fully opens its airspace: Why India must remain cautious

Who budged under whose pressure will never find an answer. It's better to take measured steps now.

After five months, Pakistan’s airspace is now fully open for all flight operations. This will decongest two things: The air traffic, surely; the logjam in the bilateral relations, possibly.

But it’s time for India to act cautiously as this softening of the stand comes too soon after the ‘significant progress’ in Kartarpur talks.

After Balakot airstrike on February 26, Pakistan closed its airspace entirely. India too placed similar restrictions which were lifted on May 31, a day after Prime Minister Narendra Modi took oath for his second term. 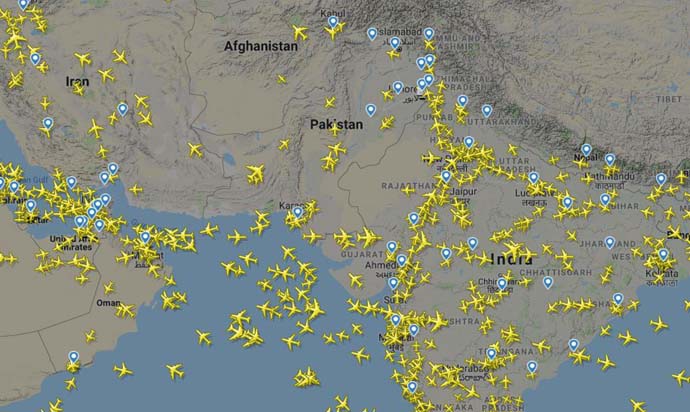 Relief for air traffic. But not a time to heave a sigh of relief as far as bilateral relations are concerned. (Photo: FlightRadar)

Pakistan’s airspace being the connecting point for major air routes, the decision snowballed into mayhem. It was revised and was partially lifted in the last four months, but the airspace was never made open for Indian flights or India-bound flights.

It seemed that Pakistan was waiting for the general election results to reconsider the decision. But the closure remained in place for almost a month and a half after May 23.

Last week, the Pakistani side didn’t agree to budge on this issue.

According to reports, Pakistan’s aviation secretary told a parliamentary committee that Pakistan declined a request to open its airspace until India de-escalates. By de-escalating, he meant that India will have to withdraw its fighter planes placed forward.

Meanwhile, on July 14, the second rounds of talks between the two sides on the opening of the Kartarpur corridor for Sikh pilgrims went on smoothly and ended mostly in consensus. The second round of Kartarpur talks concluded smoothly. (Photo: ANI)

Islamabad has apparently agreed to allow visa-free access to the shrine to at least 5,000 pilgrims every day. Earlier, it was not agreeing to the number of the pilgrims and was ready to allow only 500 to 700 pilgrims. It has also assured that no pro-Khalistani element will be allowed in this corridor.

Two back-to-back developments, apparently positive, would surely score brownie points — but on both sides of the border.

It will be seen as a giant leap as far as foreign relations are concerned — both for India and Pakistan.

Both Narendra Modi and Imran Khan will be applauded for the thaw that we didn't see coming.

While both the countries will claim credit for this, let's not forget the economic aspect of this and the international pressure on Pakistan.

Indian airlines suffered a loss of at least Rs 549 crore. Pakistan, meanwhile, underplayed its aviation losses and claimed that many new routes were opened and the Pakistan International Airlines (PIA) revenue actually jumped.

While this debate will never find an answer, it's not yet time to throw caution to the winds.