The politics of the upcoming Pakistan polls

With a queered pitch and biased umpires, Pakistan’s struggle for democracy is far from over.

The deadly suicide bomb attack on an election rally in Peshawar on July 10 underscores the dangers of campaigning ahead of the upcoming polls in Pakistan.

But the danger lies mostly in wait for those who don’t have the blessing of the powerful security establishment and the militants — are the military and militants the same thing, as some allege?

A slogan increasingly raised over the past months is: “Ye jo dehshatgardi hai, iss ke peechey wardi hai”, popularised by a youth-led, social media-powered movement that has powerfully challenged extra-constitutional methods of fighting terrorism, like extrajudicial killings and enforced disappearances. There is almost complete censorship of this movement in Pakistan’s broadcast and mainstream media. 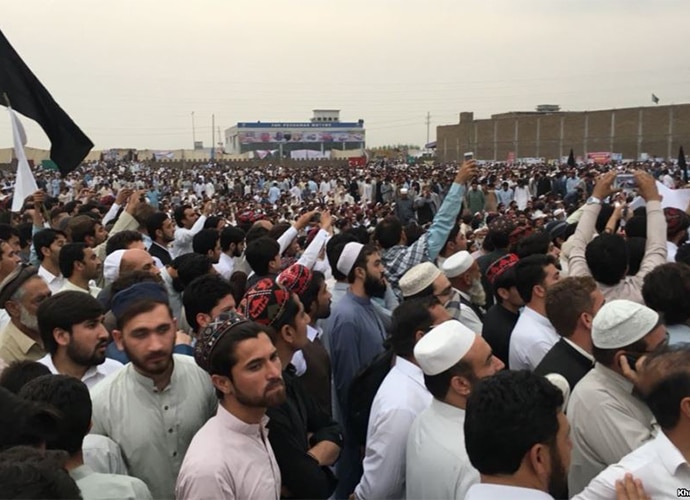 We See You: The powerful Pakistan Tahaffuz Movement has impacted the country's upcoming election. (Photo: RFERL.org)

“The military is behind this terrorism” is a rough translation of the slogan first heard during Genereal Pervez Musharraf’s 2007 Emergency.

But catchy mantras eschew nuance. It’s not that simple today.

The last two periods of direct military rule did contribute to the rise of militancy. During the 1980s Afghan war, General Zia’s military regime, in collaboration with the USA and Saudi Arabia, cultivated "mujahideen" to fight the Soviets. 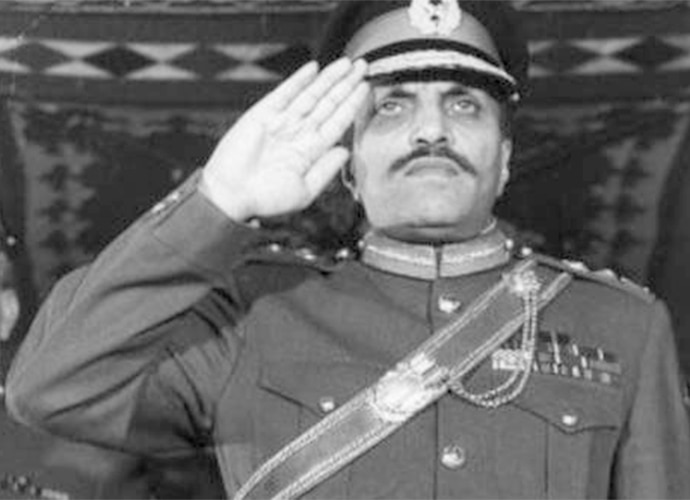 After 9/11, the next dictator General Musharraf took his famous U-turn, outlawing and banning some militant outfits. Militants targeting not the state but only expendable religious minorities and perceived enemies at home and abroad enjoyed impunity, that only exacerbated the militancy. Since then, militants, good and bad, have claimed over 60,000 civilian and 10,000 security personnel's lives. 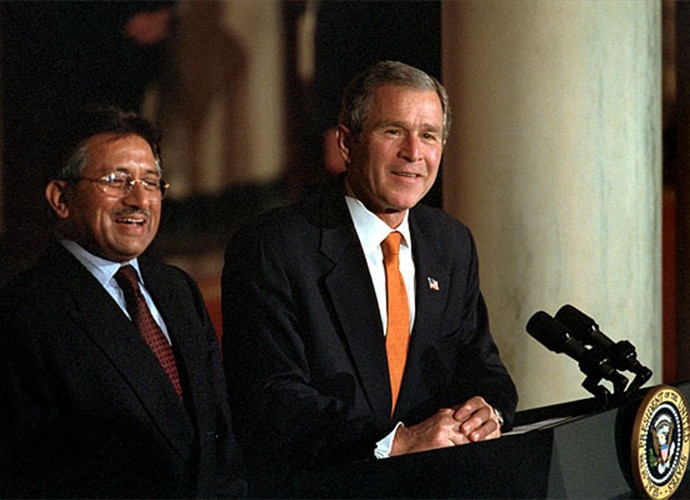 The military’s war on the bad militants is showing results. But ongoing impunity and now, attempts to mainstream "religious" hardliners, keeps the pot boiling. After the Tehreek-e-Labbaik Pakistan (good Taliban) blockaded the capital, Islamabad, last November, military officers openly distributed transport money to them. (Read "religious" in quotes because the agenda is political – taking over power). The TLP are now contesting elections. The seige of Islamabad by Pakistan's 'good' hardliners. (Photo: DailyMessenger.com.pk)

The keepers of Pakistan’s “ideology” — basically anti-India in tandem with a purist version of Islam (never mind that no one sect agrees with the other) — are uncomfortable with the rising clamour for rights and pluralism. They need blinkered hardliners to retain control of the narrative.

India’s Hindutva movement gives them grist for the mill.

And is mainstreaming hardliners inspired by the "India model"? After all, if hardliners could come to power in India not once, but twice, why not in Pakistan?

Pakistanis have so far been able to proudly assert that despite establishment support to religious elements, the people have never voted them into power. Religious parties have formed government only once in Pakistan, in just one province — that was after Musharraf held farcical polls in 2002 while mainstream political leaders like Benazir Bhutto and Nawaz Sharif were in exile. In the ensuing vacuum, religious parties under the umbrella Muttahida-Majlis-e-Amal (United Action Council) won in erstwhile North West Frontier Province, now Khyber Pakhtunkhwa, currently governed by "prime minister select", as Imran Khan is known. At other times, the few religious party candidates elected to Parliament had to ally with mainstream parties to share power. This may change, given the political engineering by hidden hands.

Since Pakistan was carved out of India in 1947, both nations have developed differently. In terms of political systems, India has had a continuous democratic political process barring Indira Gandhi’s Emergency rule. It is an avowedly "secular" state with a Constitution that democratic forces can rally around, despite the threats. Pakistan is a declared "Islamic" state, with a history of military interference in politics and governments ousted before completing their tenure. Its Constitution includes controversial amendments ostensibly based on religion that are regularly misused for human rights abuses.

Instead of Pakistan taking India’s example to stay the course in a democratic political process, India has followed Pakistan in injecting religion into politics. (See my essay: “View from Pakistan: ‘Religious’ Politics and the Democratic Political Process” in Making Sense of Modi's India, HarperCollins Publishers India, 2016)

Communal forces on either side increasingly mirror each other, oppressing religious minorities and lower castes. They use the beef ban in India much like the Zia-imposed blasphemy laws in Pakistan. Religion is equated with patriotism; those fighting for equal rights and democracy are 'anti-religion traitors'. 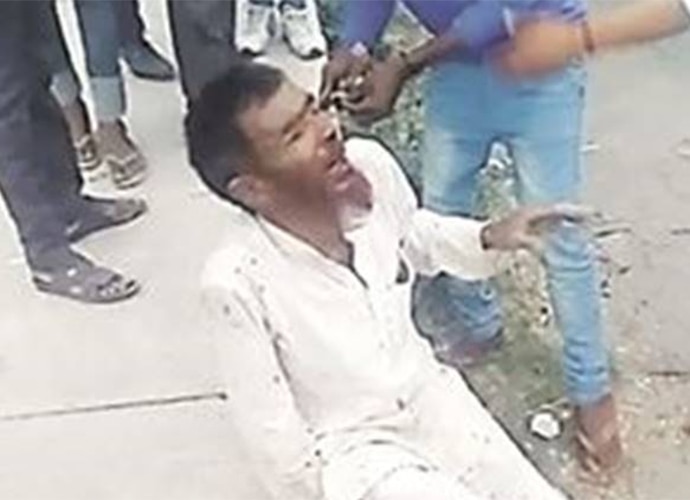 Disturbing signs: India is also seeing minorities targeted and a rise in majoritarianism. This showed in the lynching of Pahlu Khan, 2017. (Photo: Indiatoday.in)

The strength of the push-back against this fascism may be roughly proportionate to the democratic political process and the strength of the system, not just in India and Pakistan, but elsewhere too. In the long run, the continued fight for democracy and the democratic political process in India will eventually neutralise sectarian elements. But along the way, there will be much damage and bloodshed, like in Pakistan, where the armed militancy factor makes it worse.

Free and fair elections are only a part of the democratic political process. Democracy is not an event but a process that must continue over decades. It is in fact a never-ending process with no end goal post. There are road bumps and hiccups. Polarising leaders get elected, whose actions undermine democracy. The solution to this is not less, but more democracy.

The country’s history is already peppered with false starts on the road to democracy. Pakistan’s first ever peaceful, electoral transition to power was in 2013, when Benazir Bhutto’s Pakistan People’s Party, voted to power in 2008 after Bhutto’s assassination, following over a decade of Musharraf’s military rule, completed its term. It stepped down from office, formed a caretaker government to oversee the next elections, and handed over power to the winning party, PML-N. 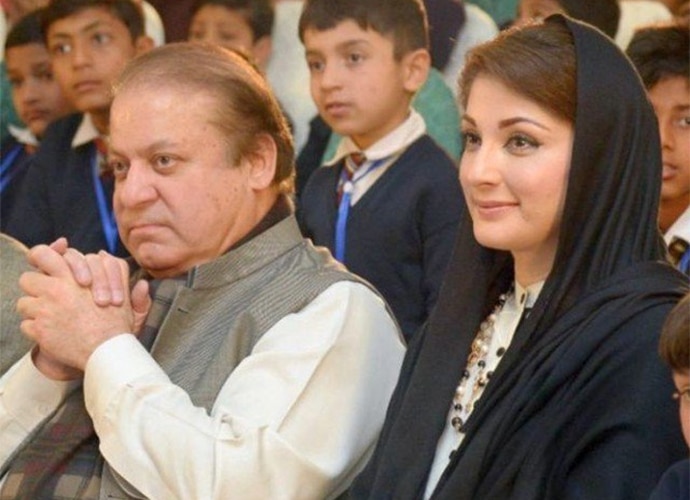 Although PML-N leader Nawaz Sharif was removed from office as Prime Minister in a move largely seen as political victimisation, his government completed its tenure. A caretaker government is in place to oversee the polls scheduled for July 25.

Regardless of who wins in the upcoming elections, what’s clear is that the Pakistani people’s struggle for democracy is far from over.

#Pervez Musharraf, #Maryam Nawaz Sharif, #Nawaz Sharif, #Pakistan election
The views and opinions expressed in this article are those of the authors and do not necessarily reflect the official policy or position of DailyO.in or the India Today Group. The writers are solely responsible for any claims arising out of the contents of this article.

Beena Sarwar is a journalist from Pakistan. She blogs at Journeys to Democracy