Does the Council of Islamic Ideology not know that millions of our women are tortured and killed in the name of religion?

In the 21st century, Pakistan is still bearing the brunt of anti-women laws. Three decades ago, former dictator Zia-ul-Haq presented the Hudood Ordinance in 1979, which goes against the basic rights of women.

Few years later, former prime minister Shaheed Benazir Bhutto could do nothing to remove the discriminatory law because it had been presented in the assembly in the name of Islam.

Whenever human rights' advocates, writers and women themselves speak about the Hudood ordinance, calling for amendments, it is declared that the groups have western agendas and speak against Islam. 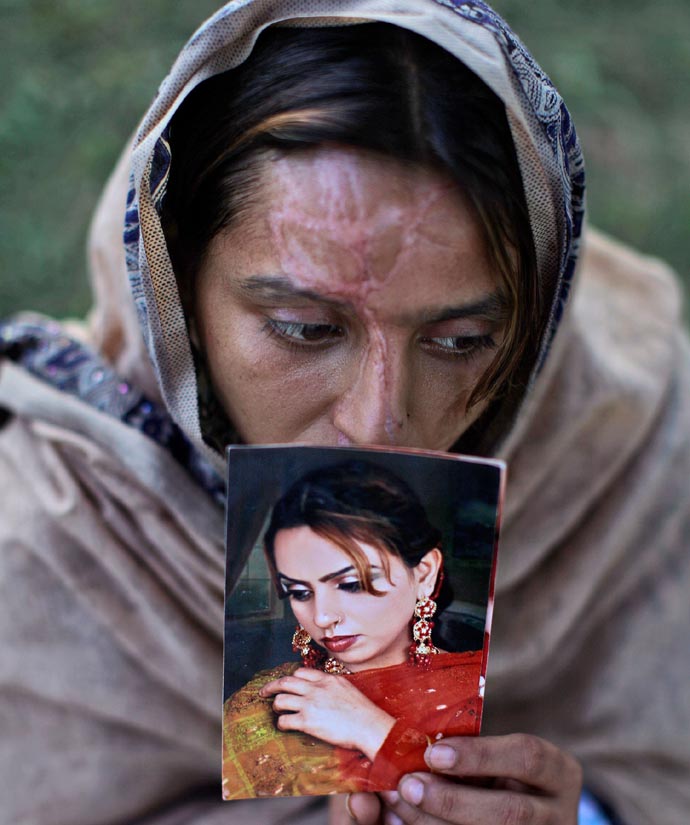 Pakistani acid attack survivor Shamma Maqsood holds a picture of herself before the attack.

"If we speak for human rights for women, religious voices say that we are rendering our society uncivilised and imposing the western culture upon Pakistan."

If women ask for equal rights, is it a western agenda? If they wish to be equal participants in the society to promote democratic values, would you term it a foreign practice?

Are women in our society to walk on the tightrope of laws that harm their lives?

No democratic and civilised society accepts such laws. Even so, when women speaking up for human rights, they are always targeted and named characterless and uncivilised. The reason being that conservative minds want to keep women confined to four walls and see them as slaves.

If women broke this tradition and contributed their share in the society at par with men, it would hurt their so-called egos.

Therefore, the conservative class does not want to see women empowered and tries to banish them behind closed doors in the name of Islam.

Whenever governments pledge to bring new laws to protect women and ensure their human rights, then the Council of Islamic Ideology (CII) speaks against them. It seems that CII has one responsibility alone - and that is to oppose women's basic rights.

It sees criticism from most fronts - be it social media or political parties. While it is entrusted with making recommendations, the CII presents itself as a law in itself, which is unacceptable.

The council has reduced its importance a great deal because of its inhuman statements concerning women.

"What is the use of CII in our system? When we have parliament system and parliamentarian bound to account for legislation and Supreme Court is present that can tell us about law - nowadays CII has lost its importance while making nuance statement. Those who want to keep Zia-ul-Haq's ideology alive in society, they back up CII, said Zaman Khan, coordinator, Human Rights Commission of Pakistan.

Pakistan's Punjab Assembly presented the Protection Of Women Against Violence Bill 2015 (PWAVB), appreciated across Pakistan, and the civil society expressed its doubts about whether the Pakistan Muslim league - N (PMLN) can implement the legislation in its spirit.

So far, the PWAVB has found support across the country and given Pakistanis a reason to hope because the PMLN has worked for the cause of women.

Unfortunately, the CII feels that such a bill needs its religious, scholarly review following which it will recommend what the legislation should entail!

On May 26, 2016, CII's recommendation on the bill led to strong disagreement among citizens, political parties and human rights organisations, including PMLN.

The CII "allowed a husband to 'lightly beat' his wife".

Does the CII not know that millions of our women are brutally beaten, tortured and killed in their homes?

Several prominent women in the Pakistani society have condemned the CII's recommendation.

PMLN Member of National Assembly(MNA) Maiza Hameed openly criticised the proposal: "Punjab Assembly has started working on PWAVB, and we cannot accept a single undemocratic or un-Islamic word which allows the world to laugh at us. Indeed, the CII's statements may have shown our religion in poor light. Our religion (Islam) does not allow violence against women. How can CII speak about them?"

Hameed added that Islam should not be abused by men.

The CII should think about the negative thoughts this will feed into innocent minds in our society, and how they will be used to create more problems.

This is not just a stray statement; it has a lasting impact on everyone's minds. We should think for our children, the young generation that lives in our society. We need to give them positive and not negative education.

"We will consider logical, humanitarian recommendations that reflect the tenets of our religion; those leading to further violation are unacceptable," said Hameed.

"These are insane statements and they (CII) have lost their nerve," said Asma Jahangir, human rights activist and former president of the Supreme Court Bar Association of Pakistan.

Such recommendations will only plunge Pakistan into darkness, forcing it to become a slave society.

#Islam, #Women's Rights, #Pakistani women
The views and opinions expressed in this article are those of the authors and do not necessarily reflect the official policy or position of DailyO.in or the India Today Group. The writers are solely responsible for any claims arising out of the contents of this article.