Truth behind how and when Pakistan started using jihad against India

[Book extract] The Pakistani state has allowed these Kashmiri militant groups to function as social-political-militant entities.

The Afghan jihad and the creation of jihadists

From 1977 to 1988, Pakistan was ruled by a military dictator, General Muhammad Zia-ul-Haq.

He was austere, a consummate British-trained army man, brutal and widely disliked. He ruled over Pakistan with an iron hand. He was personally devout, but he used Islam ruthlessly for political and strategic ends. He believed that without Islam "Pakistan would fail". His regime introduced and mainstreamed the concept and the terminology of the "Pakistan ideology", that Pakistan was created for Islam. As described in chapter 4, with the help of the Jamaat-e-Islami party, he used this concept to transform educational curricula. Under the guise of Islamisation, he also changed parts of Pakistan's legal system, rendering some laws discriminatory at best and draconian at worst.

But Zia's most damning legacy came from his role in the (US-and Saudi-funded and supported) anti-Soviet Afghan jihad. For all his hardline beliefs and policies, Zia was pro-America, and his term was a high point of US-Pakistan relations. He joined the US-Saudi alliance not to support the fight against communism but to acquire "strategic depth" for Pakistan in Afghanistan that would boost its power with regard to India. The argument was that a friendly government in Afghanistan would boost Pakistan's regional standing and counter the Indian threat on its east with an ally to its west. That the strategic decision to counter India in this way was taken during army rule is not a surprise.

The cause was strategic, but the methods used were not. The Afghan resistance against the Soviet occupation was framed as a religious jihad, its fighters called mujahideen. They were armed as much with ideology as with guns; the armed resistance was conflated deliberately with Islam. This suited Zia. Steve Coll argues that "a war fought on Islamic principles could... help Zia shore up a political base at home and deflect appeals to Pashtun nationalism."

Thus the same imperatives that led Pakistan to rely on Islam - the need for political legitimacy and fear of internal fractures - led it to use Islam in this external war. In fact both Islam and countering India - Pakistan's two narrative pillars - played a role in driving Pakistan into the Afghan jihad.

Both America and Saudi Arabia funded the jihad, and America provided arms and technical advice. Pakistan (and its Inter-Services Intelligence, the ISI) trained the Afghan fighters as well as Pakistani volunteers who joined the jihad. The training was both ideological and military, and it was conducted in new madrasas in Pakistan and in existing ones repurposed for the jihad. 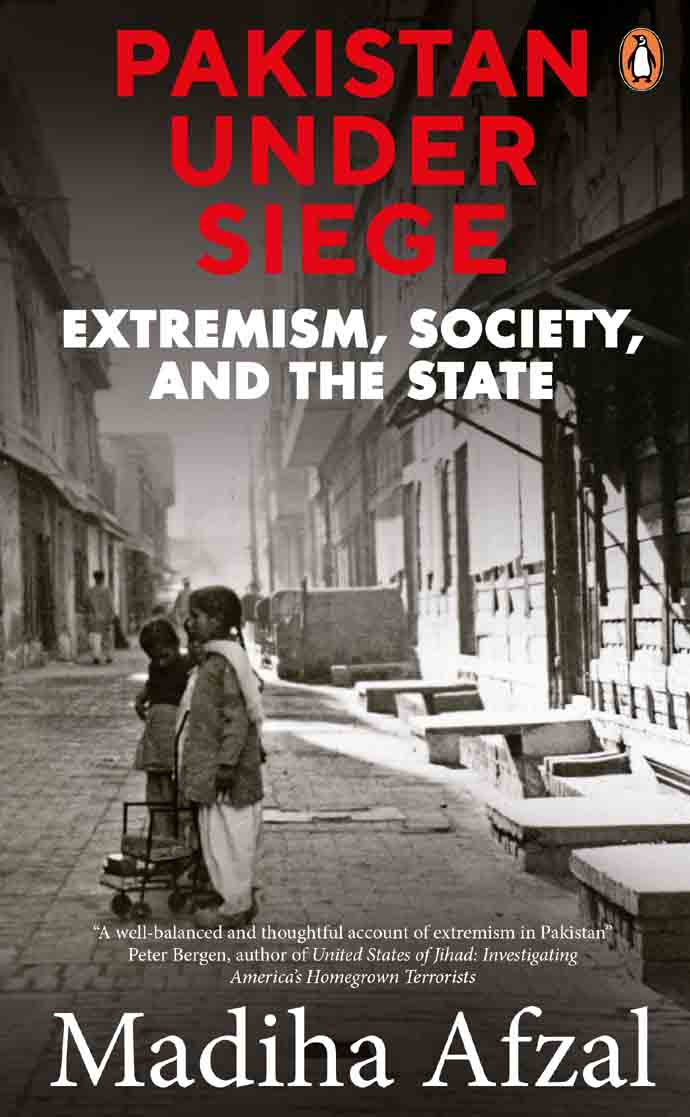 Pakistan Under Siege: Extremism, Society, And the State; by Madiha Afzal, Penguin

A mainstream Islamist party, the Jamiat Ulema-e-Islam (JUI), ran many of these madrasas. The JUI's rural madrassas were already the "main conduit for the dissemination of Wahhabi Islam" in Pakistan in the 1970s. These madrasas multiplied in number during the 1980s and, through them, the JUI became a major supplier of mujahideen for the Afghan jihad.

The military's ISI conducted the trainings and the management of the Afghan mujahideen. Coll argues that America left the choice of picking political winners among the Afghan resistance to Pakistan, and that Pakistan chose the more radical fighters over Pashtun leaders because the jihadists were better fighters (in its view) and because the Pashtun fighters were "likely to stir up Pashtun nationalism inside Pakistani territory," and would have been threatening to an internally insecure Pakistan.

Many of the well-known militant-linked madrasas in Pakistan today - the one at Lal Masjid, the Binoria madrassa in Karachi, and Lashkar-e-Taiba's Dawat-ul-Irshad - were established during this time. These madrasas were mostly Sunni, and the ones supported by Saudi Arabia were Wahhabi.

The immediate result of the Afghan jihad was a dramatic increase in money, arms, and hardline religious ideology in Pakistan; the latter two far outlasted the Soviet withdrawal, as did the jihadi groups created during this time, the madrasas, and the Pakistani men who were trained in them. The worst outcome of the whole affair in some ways was the normalisation of the concept of jihad as a tool in modern Pakistan. The success of this strategy in Afghanistan led the ISI to use it next to the east, in Kashmir, against its biggest foe: India.

Kashmiri jihadists and the state

Some of the Pakistani jihadi groups that fought the Soviets - the Harkat-ul-Mujahideen (HuM) and Harkat-ul-Jihad-al-Islami (HuJI) - turned their focus toward the Kashmir cause once the Soviets withdrew. It is understood that Pakistan's Inter-Services Intelligence directed them that way, to aid what had begun as an organic resistance in Kashmir against Indian rule in 1989. Here was a second example of the Pakistani army using Islam for war, in this case against its existential threat, India-another decision in service to its narrative.

Since then, the ISI has reportedly given cover and support to jihadist groups fighting in Kashmir - particularly to Lashkar-e-Taiba, Jaish-e-Mohammad, and Harkat-ul-Mujahideen. In some cases these groups have allegedly acted as proxies for Pakistan's security agencies; in others, they have acted more independently. The support they receive has meant a financial backing, but these groups also generate money through donations. They are able to function and organise in the heart of Punjab. These groups also have ties with Islamists. Hafiz Saeed, the head of Lashkar-e-Taiba (and its political and charitable arm, Jamaat-ud-Dawa), is a former member of the Jamaat-e-Islami.

In response to foreign pressure to take action against these groups, the Pakistani state has engaged in purposefully negligible prosecution towards them. This is why Hafiz Saeed can give public speeches and openly hold large rallies with a $10 million American bounty on him. It is also why Kashmiri jihadist groups are able to rename and reconstitute themselves after they have been banned.

During those times, the charity wings of these militant groups, such as the LeT's Jamaat-ud-Dawa (JuD), function as acceptable fronts for the groups. JuD was ostensibly officially banned in 2015, but it continues to function freely.

When one of these Kashmir-focused militant groups is held responsible by India (or the West) for a large-scale attack, like LeT for the Mumbai attacks in 2008 or JeM for the Pathankot air base attack in 2016, any punitive action against the group, its leader, and its facilities tends to be short-lived and largely symbolic. When the furore dies down, things go back to the way they were. Hafiz Saeed has been detained multiple times - after September 11, 2001, and after attacks in India in 2006 and 2008 - only to be released after a few months with the claim that there were no grounds to keep him detained. Similarly, JeM's Masood Azhar was taken into protective custody after September 11 and later released.

These jihadi groups do not target Pakistani civilians or the state directly; their enemy is clearly India. But the concept of jihad is unwieldy, and the rhetoric of these groups is not limited to liberating Kashmir. They are anti-Israel, anti-America, and anti-West. They say their ultimate goal is to impose Sharia in South Asia, and they talk of support for a global jihad. This is explicit in their pronouncements, as in the Jamaat-ud-Dawa's manifesto, titled Why Are We Waging Jihad: "Is there any place in this world today where Muslims are not suffering? Are there not cries for help from the downtrodden Muslim men, women and children in Indian Kashmir, the Philippines, Chechnya, China, Russia, Bosnia among other places, all pleading to be saved from their torments? The blurring of lines across jihadist groups is not limited to rhetoric; they sometimes provide sanctuary to members of other groups, and their own fighters "migrate" across groups. According to the US State Department, a top al Qaeda lieutenant was discovered at a LeT safe house in 2002.33 And Coll reported that LeT fighters joined the fight with the Afghan Taliban in the mid-2000s: "Some of its [JuD's] younger volunteers wanted to join the fight with the Taliban in Western Pakistan and Afghanistan . . . and so Jamaat [ud-Dawa] had evolved an internal HR policy by which these young men would turn in their Jamaat identity cards and go West 'on their own time,' much as think tanks allow policy scholars to take leaves of absence to advise political campaigns."

Thus these groups pose a direct security risk to Pakistan, but Pakistan's India-obsessed army fails to recognise that-it feels they can be contained, or that their strategic use is worth the risk.

The Pakistani state has allowed these Kashmiri militant groups to function as social-political-militant entities. They openly provide charity and extensive social services, as described in chapter 1. This helps them win over Pakistanis' hearts and minds. In 2016, Pakistani newspapers reported the existence of an illegal JuD Sharia court in Lahore, running parallel justice to the state. The government seemed to have no knowledge of it. JuD denied it was running a court and said it was engaged only in arbitration. But the person who first reported the story to the media - the "defendant" in a case - showed he had, in fact, received a summons to the court.

These militant groups are also able to freely publish and distribute their propaganda. JuD and LeT run a slate of magazines in multiple languages - Urdu, English, and Arabic - with large circulations. LeT also runs a magazine for students and one for women in addition to publishing dozens of booklets and maintaining websites in Urdu, Arabic, and English.

(Excerpted with permissions of Penguin from Pakistan Under Siege by Madiha Afzal.)

#Jamaat-ud-dawah, #Hafiz Saeed, #Afghanistan, #Terrorism
The views and opinions expressed in this article are those of the authors and do not necessarily reflect the official policy or position of DailyO.in or the India Today Group. The writers are solely responsible for any claims arising out of the contents of this article.

Work on education, development, politics, extremism in Pakistan & beyond.