Just one move from Pakistan can end all the tension: Hand over Maulana Masood Azhar to India

What rationale will Pakistan keep offering for harbouring a known terrorist? Is he worth risking Pakistan's everything before the world?

I have a habit of checking what’s trending on Pakistan’s Twitter. Last Thursday, I was in for a surprise — the term #Sialkot was trending.

Clicking on that trend, I was in for more surprises. The Pakistani Twitterati seemed convinced that the Indian Air Force had launched an air assault over Sialkot.

The truth was just the opposite — it was their own planes doing a sortie over civilian areas, perhaps creating sonic boom as they crossed the barriers of sound.

Even Indian journalists tried to placate Pakistanis, requesting them not to panic.

Scare in Sialkot, Pakistan after two fighter jets of the Pakistan Air Force flew near civilian areas of the International border. Indian border forces noticed the movement as well. Please don’t speculate as it spreads unnecessary panic given the situation.

Another factor that has made the Pakistanis go into panic mode is the ominous silence from the Indian government regarding their action plan post the Pulwama terror attack. 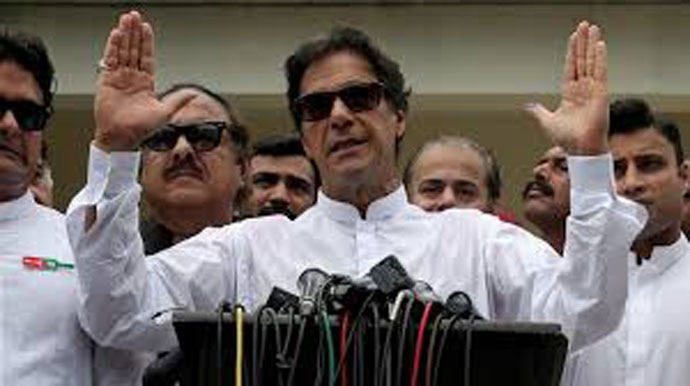 Instead of more grandstanding, Imran Khan should just do what is right for the people of Naya Pakistan. (Photo: Reuters/file)

Going by what we are seeing, the Pakistani awaam and their government seem genuinely concerned that India might hurt them.

But unfortunately, the Pakistani government hasn’t checked its 72-year-old history. If they had, they would have known that India has not once started a war on them.

The Indian Armed Forces have defended our territory or a friendly country in all the wars we have fought till date. Given this history, it seems highly unlikely to me that India would launch an all-out assault on Pakistan. As usual, Pakistan’s apprehensions seem to be unfounded and they are looking at the wrong places for a solution.

Most of the decisions that India has taken are aimed at shaming Pakistan in the international arena. The condemnations too have come quickly — whether from New Zealand or the UN Security Council. India has also reportedly decided to prepare a dossier of Pakistan’s terror networks and present it to all friendly countries.

The verdict from the world community is unanimous — it’s Pakistan who hasn’t done enough to contain the terror that is originating from its soil. The world community is also aware that the reports of the ban on Jamat-Ud-Dawa are an eyewash, because almost 41 banned terrorist groups in India operate from Pakistan.

The way Pakistan is getting cornered, it’s just a matter of time before the country will have their back to the wall.

With one move, they can prove to the rest of the world that they are serious about curbing terrorism originating from their soil. Pakistan’s one single step will actually end all the tensions between the two countries and bring back stability in the region.

That one step is — Handing over Maulana Masood Azhar to India.

Maulana Masood Azhar is a convicted terrorist who is also an undertrial in India.

Pakistan has openly admitted that Maulana Masood Azhar is in their “protective custody", while it is public knowledge that he lives almost like a free man in Bahawalpur, in Pakistan’s Punjab province, reportedly frequently addressing crowds and urging them to take up arms against India. Maulana Masood’s inflammatory speeches are all over YouTube, because Pakistani authorities have not flagged them as ‘terror content’. Is one man — a terrorist — important enough for Pakistan to put everything at stake internationally? (Photo: Reuters/file)

India has been pushing for the arrest of Maulana Masood Azhar for decades, but on Pakistan’s request, China has been vetoing the move to declare him a global terrorist at the UN.

Everybody knows that if Maulana Masood Azhar is handed over to the Indian authorities, the whole game will change. Imran Khan’s 'Naya Pakistan' will go down in history as a government that decisively acted against terrorists — who knows, the world’s opinion may even tilt in favour of Pakistan?

Is one man important enough to put the whole country’s economy and reputation at stake?

The Pakistani government must ponder over this question.

Today, if Maulana Masood Azhar is handed over to India or the Interpol, the world will watch his trial in India and the world community will definitely applaud Pakistan for its intent of removing marked terrorists from its soil.

It’s now for the Pakistani government to choose — Maulana Masood Azhar, the enemy of mankind, or...

After all, its own innocent people are suffering and appear scared — very scared.