Why Pakistan was left isolated at UNGA

For the nation that continues in its belief of using terror groups as an instrument of state policy, the doors are slowly closing.

This week witnessed a series of addresses at the United Nations by heads of state or their representatives. The world followed as leaders from United States, Pakistan, India, Afghanistan and Bangladesh shared their concerns. In many cases, the country against whom statements were made exercised its right to respond and sought to discredit the remarks of the previous leader. United States president Donald Trump, while openly threatening North Korea and Iran, also gave a direct hint to Pakistan when he mentioned that terror financing and support must stop, though Islamabad preferred to ignore his statement.

Pakistan prime minister Shahid Khaqan Abbasi spoke on expected lines, blaming India for his country's troubles, claiming that Afghanistan supported anti-Pakistan terror groups and sought UN intervention on Kashmir, including the resolution of the UN mandate. He also claimed to have handed a dossier on India's human rights violations in Kashmir to the UN secretary general.

His comment that Pakistan would not be anyone’s scapegoat, referring to Trump’s criticism about its support to terror groups, was a sign of mounting international pressure against Pakistan's own actions.

To add insult to injury, Trump refused to meet Abbasi in a one-to-one in New York, while he did meet the Afghan president. Abbasi had to be content with meeting US vice-president Mike Pence. A meeting for a few minutes with Trump during the formal event hosted by him for all delegates may not mean much, but it was the saving grace for an otherwise beleaguered Pakistan prime minister. The US has made no mention of this meeting. 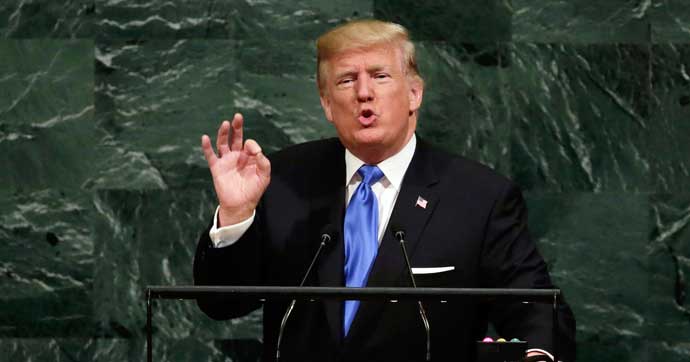 To add insult to injury, Donald Trump refused to meet Pakistan PM Abbasi in a one-to-one in New York, while he did meet the Afghan president. Photo: Reuters

Bangladesh prime minister, Sheikh Hasina, criticised Pakistan for the 1971 genocide, which resulted in the deaths of more than three million people. She also stated that terrorism and violent extremism had become a major threat to peace, stability and development — in a direct hint to Pakistan. Pakistan, in its right to reply, rejected her statement, claiming it had no takers. She spoke of facts, while Pakistan desperately tried to dispel her assertion, clearly at a loss, as history bears testimony to her words.

Afghan President, Ashraf Ghani, stated that Trump’s strategy for the conflict-torn nation would be successful solely because Washington seeks to employ a harder line against Pakistan. He went on to add: “The message to Pakistan to engage and become a responsible stakeholder in the region and in the fight against terrorism has never been clearer. If Pakistan does not take this opportunity, they would pay a high price.” Pakistan did not officially respond to Ghani, but insisted that it too has been a victim of terrorism — a poor justification that nobody would believe, as world pressure mounts on it.

In her lucid address, Indian external affairs minister Sushma Swaraj spoke of national and international issues that would be of concern to the UN. She too took on Pakistan, accusing India's neighbour of being a global supporter of terror, spending its budget on terror groups, permitting its people to suffer the abject lack of facilities.

She reminded Pakistan about the Shimla accord and the Lahore declaration, which made the UN mandate on Kashmir redundant. Her comment that it was only Pakistan that was compelled to respond to every speaker from the subcontinent proved that its terror support policies were harming the region. Her statement was well received by the UN.

Pakistan responded in its characteristic style, taking off from where its prime minister's address concluded — and accused India of being the terror exporter in the region. Their spokesperson, Maleeha Lodhi, even showed a picture of a Palestine girl to the address, claiming it was a Kashmiri who had suffered pellet wounds. Pakistan's justification included attacking the RSS and the BJP; however, it left no one in doubt that the rejoinder was given only because it was mandatory, as there were no comments on development issues. Sushma was right when she stated that Pakistan has to respond to every country in the subcontinent.

Pakistan’s belief that China would provide unstinted support to every one of its actions is misplaced. The Chinese foreign ministry spokesperson, when asked about the Organisation of Islamic Cooperation (OIC)'s comments requesting the UN to implement the Kashmir resolution, stated that Beijing's position is clear cut. Kashmir is a dispute from history and can only be resolved through mutual dialogue and enhanced communication between India and Pakistan — again supporting India's stand of bilateral discussions.

Nations of the subcontinent have all condemned Pakistan for its policies, support to terror groups and making southeast Asia insecure. In what is yet another setback for Pakistan, when the foreign ministers of SAARC nations met, they refused to accept the country as the host for the regional summit solely because it supports terror. SAARC, as an entity, has almost outlived its utility. Further, India’s support to BIMSTEC — which comprises nearly the entire SAARC but for Pakistan — and one-to-one agreements with most nations involving financial support and assistance in development, has isolated Pakistan from the subcontinent.

If strategic leaders from both its military and polity have failed to grasp the international isolation that Pakistan is slowly moving into, it may be too late for them to redirect their path.

Banking on unstinted support from Russia and China may be asking for too much as Beijing's comments on Kashmir and the BRICS statement proved. Chinese pressure would begin to mount as it fears undue military action by the US could place its investments in the CPEC in jeopardy.

To add to its misery were protests both in Geneva and New York by Baloch separatists seeking freedom from Pakistan repression. It brought into international glare what Pakistan had been keeping under the wraps all these years — brutal suppression of the Baloch people. As expected, Pakistan complained to Swiss authorities about the demonstrations, but the damage has been done and its brutality stands exposed.

For any nation, facing such hostility from its own neighbours, members of its closest regional grouping and major powers would be a clear indicator of its international and regional standing. An open refusal to accept any SAARC meeting was a slap on the face, which Pakistan still aims to downplay.

Its own deep state is pulling the nation down into a morass from which it may not emerge easily, while the polity looks on helplessly.

For the deep state that continues in its belief of using terror groups as an instrument of state policy, the doors are slowly closing.

Pressure is mounting from all directions — India, China, Russia and the US. It is time Pakistan introspects, plans a change in its policies and seeks to become a respected member of the international community.

If it delays this decision, it may soon be deemed a terrorist state.

#Sushma Swaraj, #UNGA, #India-Pak, #Pakistan
The views and opinions expressed in this article are those of the authors and do not necessarily reflect the official policy or position of DailyO.in or the India Today Group. The writers are solely responsible for any claims arising out of the contents of this article.