Pakistani Army at Lord's: When the Pak army went to watch cricket in London, on someone else's money

What's now clear is that all the money actually belongs to the Pakistan army. Questioning that only invites trouble. No wonder there were slogans of 'Pak Fauj Zindabad' at Lord's.

The Pakistani cricket team won a crucial match against South Africa in the World Cup.

The Pakistani army lost a crucial match against rational Pakistanis on social media.

The Pakistani media, unsurprisingly, is silent about the latter.

Pakistan’s Chief of Army Staff General Qamar Bajwa was recently seen sitting in London in the sunshine, cheering for the men in green. British Foreign Secretary Jeremy Hunt was also apparently there. Even Pakistan PM Imran Khan’s son was spotted, albeit separately.

Everyone has freedom of movement, of course. So, nothing can actually be said on why Bajwa or army spokesperson, the infamous Major General Asif Gafoor, went all the way to Old Blighty to watch cricket in person.

Yet, a lot was said.

Priorities!!! Are the Pak #COAS / Generals on a private visit to UK to watch #PakvSA match? Who has authorised & paid for their visit? Hope it isn’t charged to the poor taxpayers. https://t.co/D3z6t1mSN4

Former Pakistani MP Bushra Gohar was also well within her rights to ask whether the army men were vacationing on the Pakistani people’s money. Soon, the voices became louder on social media. Then Major General Asif Ghafoor took to Twitter and temporarily stumped everyone asking about the army’s day out.

My very humble request to @BushraGohar is to please avoid tweeting while being in front of mirror or using wrong glasses. Enjoy the good performance & match victory of Pakistan, belongs to all of us. Try make it for next match & support the team. Can be my personal guest. pic.twitter.com/5RjinxSonY

The Pakistan army, of course, has deep pockets, the budget that they get every year, while other development sectors of the country literally suffer, being legend now. But what’s worrying is the authority with which the said Twitter handle goes about crushing people and their legitimate concerns.

Every Pakistani in the stadium wished to host us. Try see the social media dispassionately. I have legal options but am ignoring your myopic and agenda based expression as it’s a moment of forgiving and enjoyment for all Pakistanis. pic.twitter.com/RB2Oi78w60

The army chief was apparently in the UK for an official trip. Taking time out of that trip, he was present at the stadium to cheer for the country.

But as Twitter found out, the match tickets were provided by Aneel Mussarat — a UK businessman of Pakistani origin. He is part of the PTI as well. Questions are therefore being raised over whether it’s ethical to accept such gifts from people belonging to the ruling party. 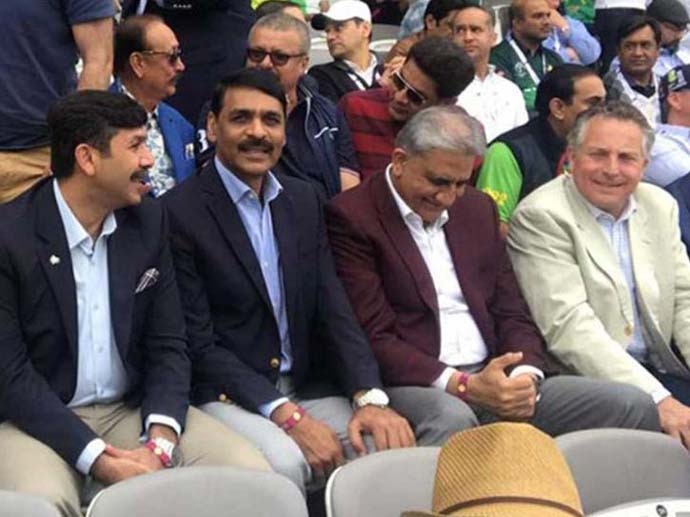 Pakistan army and its officials never run out of money! (Photo: Twitter)

Asif Ghafoor, of course, threatened such 'myopic' questions with 'legal options' and said that any Pakistani would have been happy to host the army.

What is obvious in this brouhaha is that for the Pakistani army, using other peoples' money doesn't actually matter — because if the army can have a country in its pocket, it's evident that all the country's money belongs to it too.

What matters is that you can't question the army — not in Pakistan, not in the UK, not even on Twitter.

No wonder there were slogans of 'Pakistan Fauj Zindabad' — on the sidelines of a World Cup match!

Also Read: Pakistan is desperately poor. Its army is rich beyond belief. How come?