From Big B to Nawaz Sharif, Panama Papers expose the high and mighty

More than 500 Indians have been named in the documents.

In what could be termed as the mother of all journalistic investigations, a new probe "Panama Leaks" conducted jointly by several news organisations has revealed how famous businessmen, politicians, drug mafia, smugglers and rich citizens across the world covered their business dealings through shady offshore firms, evaded huge taxes and laundered money in tax havens such as British Virgin Islands (BVI), Bahamas, Seychelles, Samoa and so on.

How did it all happen?

More than a year ago, Süddeutsche Zeitung (SZ), a German media house got in touch with an anonymous source, which contacted it and submitted these internal documents from Panamanian company Mossack Fonseca, the world's fourth biggest offshore law firm.

The leak contains 11.5 million documents worth 2.6 terabytes of data, making it the biggest leak in history. The data consists of details on companies registered from 1977 to 2015.

Graph: The structure of documents

In cooperation with the International Consortium of Investigative Journalists (ICIJ), SZ, along with more than 100 media organisations across 80 countries, led a year-long joint investigation and analysed these documents in depth.

The Guardian, BBC, Le Monde (France), La Nación (Argentina), among many others, participated in the year-long exercise to study these documents.

In July last year, The Indian Express signed an agreement with the ICIJ for being the Indian partner for the Panama Papers project.

Who does it involve? 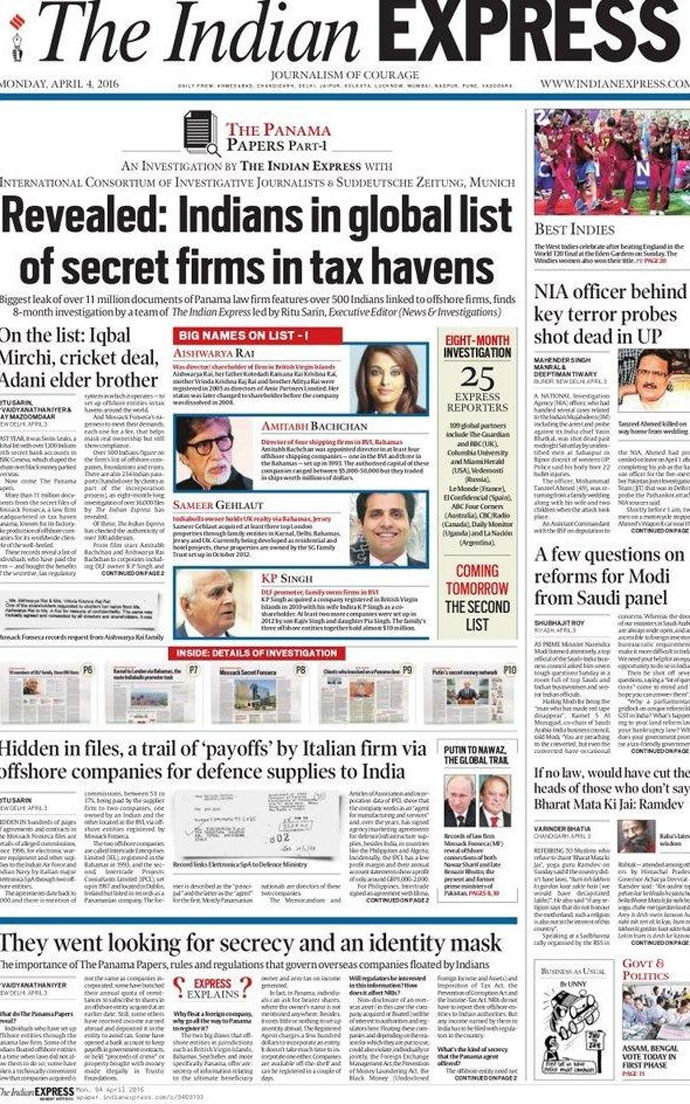 Also read: More than Amitabh Bachchan, Panama Papers are a blow to Modi

1. Nawaz Sharif: Sharif and his family set up four offshore companies in BVI, which owned six properties in London's Hyde Park. These properties were mortgaged to the Deutsche Bank (Suisse) for a loan of GBP 7 million.

2. Michel Platini: The documents allege that Michel Platini, who is serving a six-year ban from all football-related activities for an ethics breach, approached Mossack Fonseca to help him administer an offshore company created in Panama in 2007.

3. King Salman: He has allegedly mortgaged several luxury houses in London through shell companies in BVI and had a yacht equivalent to the size of a football field.

4. Sigmundur Davíð Gunnlaugsson: Prime Minister of Iceland, Gunnlaugsson, and his wife had a shell company registered in BVI that held nearly $4 million in bonds in Iceland's three major banks.

The documents by The Indian Express revealed the following transactions about prominent Indians:

1. Amitabh Bachchan: He was appointed as the director of four shipping firms set up in Bahamas and BVI. The companies traded in ships worth millions of dollars.

3. KP Singh: He acquired a company registered in BVI with his wife as a co-shareholder in 2010 and set up two more companies in 2012; the three companies hold almost $10 million together.

Responses to the leak

In response to the leaked files, there have been many reactions and responses by politicians and civil society groups.

Addressing the Confederation of Indian Industry (CII) summit, Union finance minister Arun Jaitley said, "With G20 initiatives, FATCA (Foreign Account Tax Compliance Act) and bilateral transactions in place with effect from 2017, the world is going to be a far more transparent institution and therefore, this kind of an adventurism will prove to be extremely costly for those who have indulged in it."

But later, he spoke to Doordarshan.

FM @arunjaitley on #PanamaLeaks: All unlawful financial holdings abroad will face strict actions as per the law pic.twitter.com/g8zCWlhnUu

Edward Snowden, the former CIA agent, who had leaked classified information from the US National Security Agency (NSA) in 2013, tweeted:

That time when your journalism was so hot it melted the servers. #PanamaPapers https://t.co/AkCPAh6EEI

KP Singh said: "It may be clarified that the shares in the foreign entity have been subscribed by us through and out of the funds held by us in our foreign bank accounts. No funds were remitted directly from India to subscribe/ acquire any shares of any foreign company."

New Zealand prime minister, John Key, said "New Zealand has had the same tax laws when it comes to trusts since 1988, they were reviewed by the Organisation for Economic Cooperation and Development (OECD) in 2013 and they gave New Zealand a clean bill of health. We also have extensive disclosure regimes and we are signatories to a network of treaties."

Robert Barrington from the Transparency International UK said: "The Panama Papers seem to confirm the evidence from elsewhere that the world's corrupt elite are gaming the international financial system to launder and protect their stolen wealth. The only way to stop this grand corruption is through governments, businesses and others coming together and rejecting dirty cash as illegitimate. The time has come to stop turning a blind eye to anonymous purchases of luxury property and goods, refuse to issue un-vetted investment visas and create a legal framework that is fit for purpose in detecting flows of dirty cash."

Post your comment
#Arun Jaitley, #Money Laundering, #Mossack Fonseca, #Panama Papers
The views and opinions expressed in this article are those of the authors and do not necessarily reflect the official policy or position of DailyO.in or the India Today Group. The writers are solely responsible for any claims arising out of the contents of this article.