When I first started visiting Panghot in Uttarakhand, it was a small nondescript village nestled in the forests of the lower Himalayas. Perched at about 6,500 feet, its “market” was a tiny kirana (grocery) shop, a dhaba where the family rustled up delicious parathas and instant noodles, and a post-office with a sometime postman. With fewer than 20 households, it did not qualify for a telephone line. Springs flowed freely with the clearest, sweetest water that I actually lugged back home in large cans! The villagers grew their own millets, pulses and vegetables, kept a cow or two for milk, and generally had someone in the family employed in the nearby towns of Haldwani, and Nainital.

The winds of change blew into Panghot about a decade ago when tourists chugged up the hill, and “discovered” this sleepy, unspoiled village. In their footsteps followed the tourism industry and infrastructure — resorts and hotels of all manner and hue. The locals cheered — initially — as their economy grew, land prices hiked and were parcelled off to developers. Trees were felled, buildings sprouted over traditional homes, green fields and grassy meadows; garbage spilled over the hills, and into the streams.

The most telling impact was on water. In a meeting with the local people, the women were vociferous against this tourism model, with its gluttonous appetite for natural resources they were dependent on. As winters receded, their taps ran dry, the fields went thirsty and — horrors — they had to call for water tankers from the plains unheard of, only a few summers ago. 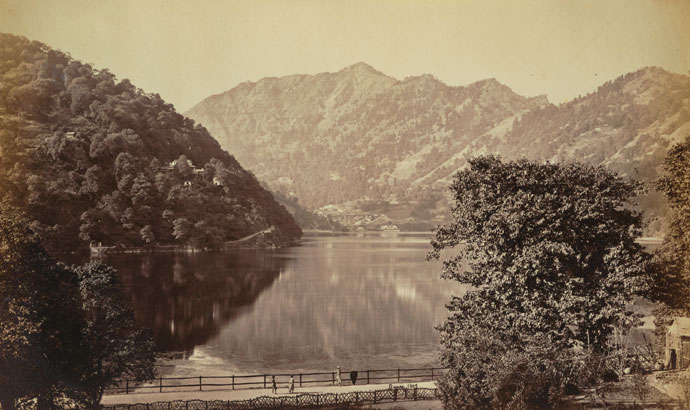 Despite Nainital being less visited during the wet season, the lake has the opportunity to refill during the quieter tourist months. Seasonal shortages in water availability are a shared problem across the Himalayas, as peak scarcity coincides with periods of highest demand as tourists seek refuge from the summer heat on the Indian plains during the driest seasons. Photo by Samuel Bourne, Cambridge University Library 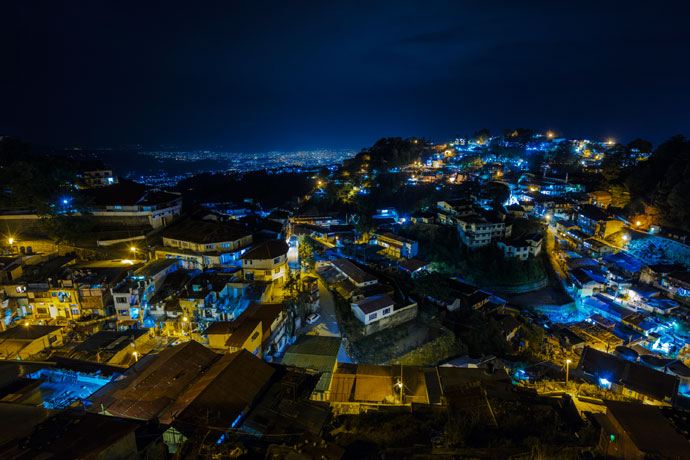 I am reminded of this Himalayan village when I step into New Delhi’s Jor Bagh Metro station and catch a glimpse of the famous Nainital Lake, once beautiful and pristine, now starved of water.

The receding lake, surrounded by peopled mountains and roads, was captured by Cambridge-based photo journalist Toby Smith in May 2017. Less rain, building over streams that fed the lake, active pumping of water and growing demand particularly in the holiday aka tourist season have drained the lake.

“But Nainital town”, points out Smith, “and its growing economy depend on the health of its beautiful lake”.

The photograph is part of the ongoing exhibition “Pani, Pahar: Waters of the Himalayas” based on a study led by Bhaskar Vira and Eszter Kovacs at the department of geography, Cambridge University.

The study explores the changing landscapes and escalating water crisis in the Himalayas, across six small towns in Nepal and India: Bidur, Dhilukhel, Palampur, Rajgarh, Nainital, Mussorrie, (or the towns not visited like Panghot); all distinct entities and geographies but similar in the changes the mountains, and its people, are witnessing.

The people of the Himalayas depend on surface water from rivers flowing from the glaciers, and springs, ponds, lakes — but such water catchments are being deforested, and the Himalayas are at the forefront of climate change with rapidly shrinking glaciers.

The region is also seeing intensive land use with quarrying for stone and sand, logging, building of infrastructure such as dams and roads, urbanisation and tourism. The cumulative impact is shrinking and pollution of water sources that the people traditionally depend on, impacting their lives and livelihoods. Says Vira, “The waters of the Himalayas sustain the lives of over half a billion people, and we cannot afford to ignore the pressures on these beautiful, but ecologically fragile landscapes.”

The photograph exhibition was conceived to bring the issue closer to the people. Vira’s connections to the Himalayas date back to his childhood. “I then went to The Doon School at age 11, and this is when the love for the hills really blossomed I spent six happy years at Doon, and the life there kept us so connected with the surrounding landscapes that this has never really left me,” recalls Vira.

This was the early 1980s, the time of the Mussoorie Limestone Quarrying case (considered the first case requiring the Supreme Court to balance environmental and ecological integrity against industrial demands on forest resources), the Chipko movement, and the emergence of an environmental consciousness — all of which influenced Vira, who went on to specialise in political ecology of forests, water, ecosystem services, and the values of nature for human wellbeing.

Says Vira, “I strongly believe that our messages about the ways in which our lives are intertwined with the natural world need to use all possible mediums of which the visual is very important. Pictures communicate so much more than just words, they go beyond minds to include hearts, bring places and people alive.”

Toby Smith’s images of mountaincapes and people, their cultures and lives are evocative. They tell a story, invoke a reaction. They are striking yet subtle — saying so much more than what is obviously visible, leaving room for interpretation, and introspection.

Mussoorie’s nightscape is a spectacular capture: the real story, though, is not the glitter of city lights, but of unchecked development and urban sprawl that has strained the town’s resources. During “season”, school holidays and hot summer months, the number of tourists — growing at unwieldy 15 per cent a year — exceed the locals by far. A few miles away, the Kempty Falls pours its waters over a sea of bathing tourists. Curio shops, eateries, poorly constructed buildings and hotels, residential complexes crowd the place to capitalise on the fall’s popularity, jamming roads. The city has come to the mountain, demanding, and taking more than it can afford. In glaring contrast to this mayhem are curated archival prints from the University Library and the Centre for South Asian Studies, which show a sparsely populated Mussoorie bazaar and the green surrounds of the Naini lake.

In one image, a set of pipes lies scattered in the fields. Such water pipes carry water over long distances disturbing farm and pasturelands. They change the dynamics of water distribution, at times leading to conflicts as water is taken from one geography and people to others. Pipes are damaged, water wars may ensue. The source of water is another contentious issue — in Rajgarh (Himachal) it is drawn from a wildlife sanctuary, depriving its flora and fauna, raising questions about how their needs can be balanced with that of rapidly expanding towns, urban communities and farmers who inhabit the landscape.

Solutions can be problems themselves. One panacea to water shortage offered by most governments and aid agencies — mega-dams — is etched in a photograph of the Tehri dam, one of the largest in recent times.

Its development has caused ecological and social havoc, and was bitterly opposed. What the researchers question is not so much the dam building itself, but the “engineering mindset, in which humans seek to control nature, rather than working with nature”, says Vira, citing the example of a proposal for water to Mussoorie is to pump it 4,000 feet up the mountain, from the Yamuna, rather than relying on gravity-based flows from the surrounding catchment (down the mountain).

Smith points out that even local solutions can be complex. North of Palampur (Himachal Pradesh), the Reciprocal Water Access scheme provides for financial upstream hamlets to regulate their forest extraction practices in order to allow for better flow of streams. This serves the downstream villagers well, but the advent cash payment resulted in conflicts within communities over the use of forests, and other such matters.

Sitting in gated colonies in Delhi NCR with piped water, such Himalayan realities seem far away, but we can’t afford to distance ourselves from the reality of water or from nature. The Yamuna that flows through the capital is sullied; it is one of the most polluted rivers in the world. Delhi NCR is among the most water-stressed regions in the world; the water that flows through our taps, and the AC in our bedrooms is partially powered by dams and hydel-projects across the Himalayas — displacing communities, drowning forests and wildlife sanctuaries.

The messages are subtle, not in your face. The images are a celebration of the sacred life-affirming waters of the Himalayas, a timely reminder of its vanishing, as we enter another dry season.

(The photographs were first displayed in Cambridge university in its Festival of Ideas and India Unboxed programme, and the exhibition [supported the ESPA programme] is currently ongoing till May 6 at the Habitat Centre and June 29 at Jor Bagh Metro station.)

Also read: The bird that could have become India's national bird but for that spelling!